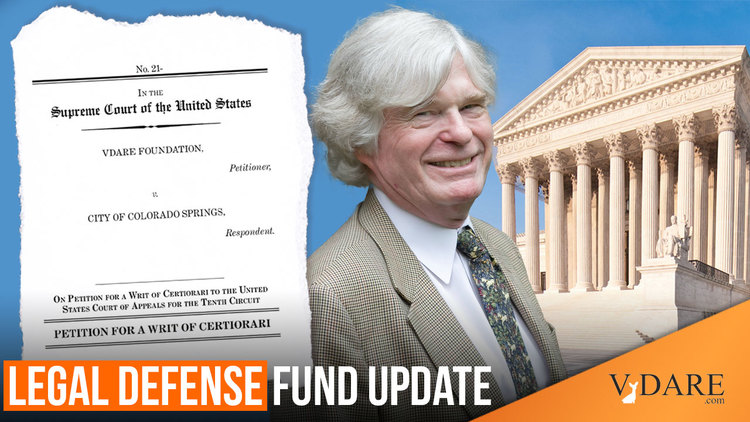 I wrote in the fall that the extremely disappointing failure of the federal courts to protect our First Amendment rights in the case of VDARE FOUNDATION vs. City of Colorado Springs would force us to take it to the U.S. Supreme Court. Our Petition For A Writ Of Certiorari was filed just before Christmas and can be viewed here.

The principle at issue here is simple and horrifying. As a noted First Amendment lawyer wrote me privately after the 2-1 Tenth Circuit decision against us:

Essentially, the majority opinion stands for the proposition that the city is free to threaten private entities in order to suppress speech.

Simply put, the majority opinion laid out the legal foundations of the American Gulag being constructed by the communists who apparently control the Biden Regime. It would mean that local governments can refuse to defend American patriots against attack from communist mobs. And, as we now know, if patriots defend themselves, they will be indicted by Soros prosecutors (see here, here, here, here, etc.). This is what the late Sam Francis called “anarcho-tyranny.”

This is completely new. No local government in the American South was allowed to refuse to defend Civil Rights anti-segregation demonstrations in the 1960s.

I look fairly cheerful in the picture illustrating this piece, but in fact I am extremely bitter that VDARE.com has been forced into this staggering expenditure of time and money simply to defend our basic civil rights. But I don’t see that we have any alternative.

I’d like to thank our lawyers, whose December was made distinctly more stressful by handling this case, and Stew Peters for his extremely incisive commentary and interview with me on the issue, which you can watch below:

Above all, I’d like to thank you, our donors. It is a chastening thought that, except for you, our much-loved donors, Colorado Springs Mayor John Suthers would have been able simply to steamroll us with his long-suffering taxpayers’ money.

Please help us to continue this essential fight.