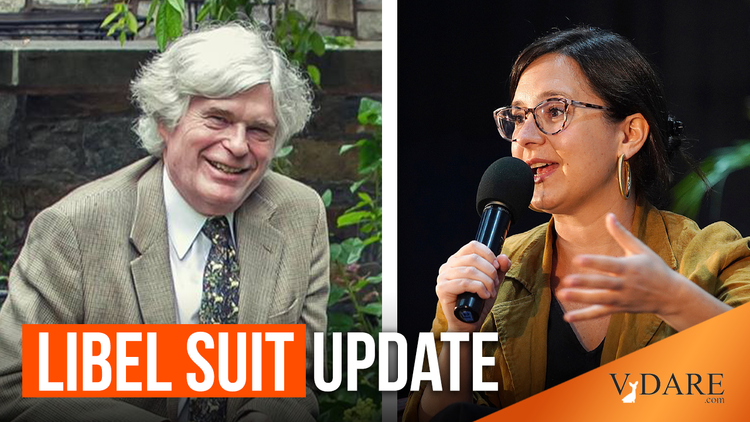 A Blackpilled Reader Wonders If Our NYT Lawsuit Isn't Just Coming At Them In "The Same Old Way"—We Say It's Something New!

From: A Blackpilled Reader [Email him]

Reading articles in VDARE.com, American Renaissance, and other "conservative" outlets, I am reminded of Wellington's comment after the Battle of Waterloo: "They came on in the same old way and we defeated them in the same old way." I can imagine the New York Times and the rest of the Leftist Establishment derisively saying the same about you. It seems that our champions still believe that logic, civility, appeals to rule of law, highlighting hypocrisy, etc., etc. will eventually succeed. Peter Brimelow wrote in his Libel Suit Update "But I do know that someone will eventually prevail." I doubt it. Einstein said: "Insanity is doing the same thing over and over again and expecting different results."

I believe we are so far down the path that the time for reasoned debate is past. As Thomas Sowell is supposed to have said "It is usually futile to try to talk facts and analysis to people who are enjoying a sense of moral superiority in their ignorance". And as Ann Coulter has pointed out [Bastille Day: The Beginning Of Liberal Madness] this is the new French Revolution. The mob is in control and there is no reasoning with it. The blood is in the water.

What is to be done? I honestly don't know. But I know what will not work and that is more of the same. To use a current leftist buzzword, we have to "re-imagine" how, if at all, we will preserve some semblance of our Western Heritage. I fear that will involve countering force with force, violence with violence, and power with power. And yet I see no stomach for it in my brethren.

They have become too soft, too feminized. We have lost the will to survive. It is interesting to analyze the causes of that erosion but in the final analysis history and logic tell us that those who will not fight to survive won't.

Sorry for dropping such a "Black Pill" on you, but I am frustrated and discouraged by seeing day after day us coming on in "the same old way."

James Fulford writes: We think it's something new—and there are cases of the MSM being sued successfully, by the late Richard Jewell, and Covington Catholic's Nick Sandmann. See Nick Sandmann Settlement With CNN—Litigation Works Because The MSM Fears "Discovery".

Even if we don't get a verdict and a settlement, it will force the NYT to admit that they're just making stuff up, as Rachel Maddow did. [Maddow’s “I’m Not a Real Journalist” Defense Prevails in Court, Cernovich.com, May 25, 2020]

Finally, I noted a while back that VDARE.com had outlasted the neocon journal The Weekly Standard, founded 1995, folded 2018. With a little luck (and support from our readers) we may yet outlast the New York Times, the Washington Post, and National Review.