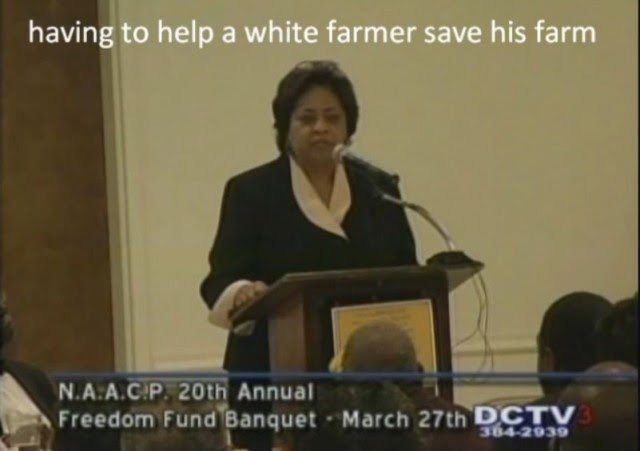 Shirley Sherrod [Email her] has just announced, at a convention of the National Association of Black Journalists, that she is suing Andrew Breitbart for libel.

The AP story says that she was fired as a result of a "heavily edited" video. But it wasn't "heavily edited", just short. [Fired USDA employee Sherrod to sue conservative blogger Andrew Breitbart, AP, July 29, 2010]

"…to the fact that poor blacks and poor whites are alike victims of capitalist oppression.

"In other words, Ms. Sherrod is a revolutionary radical; and like all revolutionary radicals, she believes that the fight against the oppressor trumps all other considerations. Racial, national, and sectarian animosities are just distractions from the true struggle." [Transcript | Audio]

David Brock's MediaMatters has a timeline of how fast Sherrod got fired, and how fast Secretary Of Agriculture Vilsack reconsidered.

So Sherrod was taken out of context.

Big deal. When has that ever mattered in the case of a white accused "racist"?

What Kathy Shaidle calls "Ransom Note Racism" is predicated on the idea that everything ever said by every conservative must be quoted against them—and Media Matters will whine about it if they don't.

Sherrod's case has been compared publicly to the Dreyfus Case, (by Keith Olbermann ),and the Bombing of Pearl Harbor (by Mark Potok of the SPLC: Shirley Sherrod and the Right: A Day That Will Live in Infamy | Hatewatch | Southern Poverty Law Center, June 21, 2010.)

"Watching a thing abt Sherrod on CNN. She's the f***ing Color Purple. Give her an Oscar and be done with it."

Dreyfus, by the way, spent four years on Devil's Island. And the bombing of Pearl Harbor, the original "day that will live in infamy,"  killed 2402 American and led to a war that killed many, many  more people.

Shirley Sherrod was only unemployed for about ten minutes (all right, two days). But she's been offered groveling apologies from the Department of Agriculture and the White House. The only reason she hasn't got her job back is that she won't take it.

She's now suing Breitbart for unknown, but presumably large, sums of money, and will be eligible to write a book called My Bondage To Fox News And My Freedom.

Some of the MSM stories refer to the "private organization" for which Sherrod worked without naming it.  So I looked it up, at The Non Profit Quarterly's website, where Rick Cohen writes

"When we first heard the charges about Shirley Sherrod's alleged statements about providing a lower level of assistance to white farmers than black farmers in danger of losing their land, something struck us as wrong. At NPQ, we have written about the struggles of black farmers against the U.S. Department of Agriculture in both the Cohen Report (here, here, and here) and elsewhere on our website (here, here and here), and our initial exposure to the issue was due to Shirley Sherrod when she worked for the nonprofit Federation of Southern Cooperatives/Land Assistance Fund. "

Well, it happens that VDARE.COM has also written about the struggles of black farmers—against, actually, the American taxpayer—in what's called the Pigford settlement.

It's a huge scam, paying not only people who farmed, but also those who tried to farm, and those who meant to farm but never really got around to it, and those who say they meant to try to farm.

The organization that Shirley Sherrod worked for, the Federation of Southern Cooperatives/Land Assistance Fund, says on its web page that it has been "Fighting To Save Black-Owned Land Since 1967 With Cooperatives" and features two pictures on its front page, one of an actual black farmer, (Irvin Fortune, raises corn), the other of Alice Walker, (author of The Color Purple, writes drivel. )

And Sherrod's status as a (rural, not urban) "community organizer" means that it's crazy for the Department of Agriculture to hire her.

Hiring Sherrod to watch Agriculture money  is as if the Department of  Homeland Security hired a Hispanic immigration lobbyist   from the Florida Immigration Advocacy Center to make policy.

So what have we learned?

The Wikipedia article says, at this time, that  "the  advertisement described actions against civil rights protesters, some of them inaccurately". And Justice Brennan said "it is uncontroverted that some of the statements contained in the two paragraphs were not accurate".

As I pointed out during the Jayson Blair scandal, this means that the New York Times had acquired the constitutional right to lie.

That's why the court said that you couldn't recover damages unless you could prove "actual malice," or reckless disregard of the truth.

Justice Black, in a concurrence, went even farther:

"In my opinion the Federal Constitution has dealt with this deadly danger to the press in the only way possible without leaving the free press open to destruction—by granting the press an absolute immunity for criticism of the way public officials do their public duty."

That's right—the First Amendment's main purpose is not protecting pornography, the right to beg on the street, or  aiding enemies in time of war.