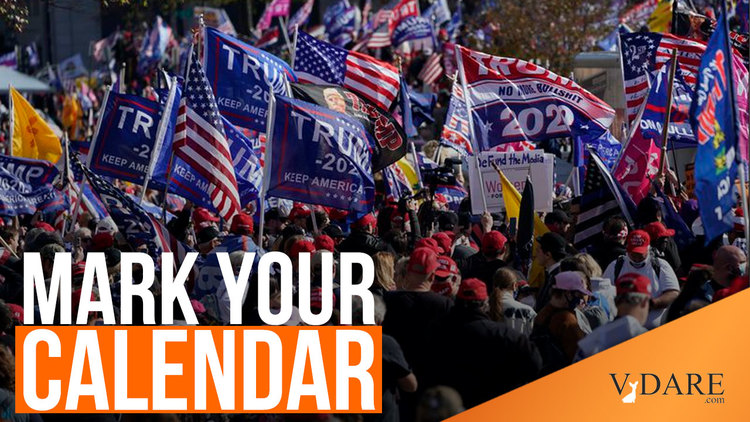 Why I’m Going To The Jan. 6 Stop The Steal Rally—While We’re Still Allowed To Have Them

Joe Biden began his (allegedly) successful presidential campaign by invoking the 2017 Charlottesville Unite The Right Rally—which in retrospect marked  the beginning of a massive Ruling Class campaign of repression against what was then the Alt Right. It largely succeeded in crushing the demonstrations and self-organizing that had been taking place in the grassroots. Now, however, President Trump’s fight against electoral fraud is giving rise to a new movement willing to take to the streets and not be held hostage by the GOP leadership. Rather than being the end of MAGA, this may simply be the beginning of something new.

I was at Charlottesville and remain intensely bitter about our mistreatment by the political Establishment, Left and Cuckservative. Nevertheless, I believe everyone on the patriot Right, including conservatives, nationalists, and Identitarians, should stand with President Donald Trump on Wednesday January 6 by attending the mass rally in Washington D.C.—as I will myself.

First, it’s important by itself to show that patriots are able to hold mass demonstrations. (How many mass demonstrations has Mitch McConnell inspired?) Second, whatever President Trump’s shortcomings or failings, at this point he is once again a “wrecking ball” against the leadership of both parties and against the Main Stream Media. His foes are our foes. Finally, whether you want to “take over” the GOP or break it and support a new more forthrightly nationalist party, only Trump can be the catalyst for this transformation.

I have few illusions that President Trump can stay in office, but I don’t see the downside of supporting him now.

Significantly, the very fact that Trump supporters will be gathering in numbers has the Left calling for repression. Washington D.C. Mayor Muriel Bowser, notoriously complaisant during the BLM riots in her city, requested use of the National Guard [DC mayor requests National Guard support ahead of expected protests around Electoral College certification, CNN, January 4, 2021]. The Pentagon quickly approved, perhaps a sign of the institution’s disdain for its Commander in Chief [Pentagon approves DC mayor’s request to deploy National Guard for upcoming demonstrations, by Alex Marquardt, Barbara Starr, Alison Main, and Devan Cole, CNN, January 4, 2021]. After all, every single Secretary of Defense who is still alive—including Dick Cheney, Chuck Hagel, and Donald Rumsfeld—signed a letter saying the election was over [All 10 living former defense secretaries declare election is over in forceful public letter, by Paul LeBlanc, CNN, January 3, 2021].

What’s remarkable about the city’s mobilization is that the last time there was a Trump rally in Washington D.C., the violence notoriously came from Leftist vigilantes, not the Right.  D.C. was also badly hit by the BLM riots last summer. However, when patriots are the demonstrators, suddenly they becomes a major threat [DC National Guard to Respond to Pro-Trump Protests This Week, NBC, January 4, 2020].

Today, American law is enforced unequally. Thus a mass demonstration by itself is a way to fight the precedent begun in Charlottesville of shutting down right-wing rallies for purely political reasons.

We can’t allow ourselves to be permanently kept from the public square. Patriots need to show they have not been totally cowed.

Some dismiss the entire Stop The Steal movement as a grift. But I don’t—and nobody is more cynical than I am about Conservatism Inc. Instead, I see ordinary Americans willing to fight for someone whom they believe is their champion. Culturally, Trump is an implicit symbol of American nationalism and for Americans who feel their System is selling them out. It is a good thing if Donald Trump also feels that way about the GOP.

Regardless of whether there is any plausible path for President Trump to retain his office, he has every right to be suspicious about the election results and to protest them. Trump may also have let done immigration patriots down in many ways. Yet frustration and resentment shouldn’t cloud our actions.

It’s not about what President Trump was or could have been but what he is now. And for once, there is proof that the president is deeply engaged with an issue on a personal level [Trump Call Actually Reveals A President Deep Into Detail, With Establishment Republicans Dismissive, Unwilling and Rejecting Transparency, by Raheem Kassam, National Pulse, January 3, 2021]. He’s not going to walk away from this or give up his claims that the election was stolen. He’s questioning the system as a whole, which is why journalists (or politicos like Robert Reich) are making wild charges of “sedition”:

It’s good if American patriots start thinking of themselves as not merely out of power, but under a hostile regime. The incoming Biden-Harris administration will an Occupation Regime, not just another change in government. It will pursue radical shifts in immigration and other areas that could drown the Historic American Nation.  But if left to their own devices, the Republican Establishment won’t challenge any of these policies on a fundamental level and will instead just tinker with donor-driven economic wonkery.

Trump’s election fraud fight ensures that won’t happen. Many argue that what President Trump represents now is nothing more than a personality cult. And it’s probably true that President Trump himself thinks it is all about him, rather than the ideas he ran on in 2016. However, I still argue that President-in-Exile Trump will represent the nationalist program in the minds of most Americans. Would-be MAGA heirs like Senator Josh Hawley would feel the need to cater to him on issues like trade, immigration, and foreign policy.

If the GOP is to be changed in a positive direction, Trump is the only symbol we have to rally behind [MAGA Patriots Must Win the GOP Civil War, by Gavin Wax, American Greatness, January 3, 2021]

Of course, it may prove impossible to change the Republicans into a National Conservative party. In that case, nationalists need to launch a Third Party. Here too, President Trump’s cause serves tactical needs. If there were to be a Third Party, you would need to show that the Democrats and Republicans don’t differ on the most important questions. The spectacle of the GOP and Democratic leadership coming together to squash Trump’s protests would be a powerful example. Another would be if they went on to collaborate in something like Amnesty. The idea that President Trump’s election was “stolen” could serve as something of a Sorelian myth that could birth a new movement or party.

The D.C. Stop The Steal Rally will also be one day after the crucial January 5 Georgia run-off elections that will determine who controls the U.S. Senate. Senators David Perdue and Kelly Loeffler have not stressed immigration during the campaign. If they win, it will be because President Trump successfully convinced his voters to back them, even if some are grumbling about boycotting the election [Trump drive to overturn election, rescue Senate majority collide in Georgia, by Andrew Desidero and James Arkin, Politico, January 4, 2020]. ]. If they lose, it will show that Republicans can’t afford to alienate President Trump’s “America First” voters. Though many Republicans would like to be free of President Trump’s influence, he retains his hold on the party base [Polling Shows Why Trump Will Retain His Bully Pulpit With the GOP Base Even After He Leaves Office, by Eli Yorkley, MorningConsult, November 24, 2020].

If there is to be any hope for the Historic American Nation, those Trump voters need to be a conscious political force that the Republicans can’t take for granted.  They still believe in the national populism that Trump ran on in 2016 and still symbolizes today. A demonstration specifically in favor of Trump on Wednesday will show the needed strength and independence. It will show the GOP there is no going back.

And it will show, that despite the repression occurring since 2017, that patriots will not simply concede the public square to the Left.

Perhaps the ultimate reason to protest on Wednesday is—because we still can.