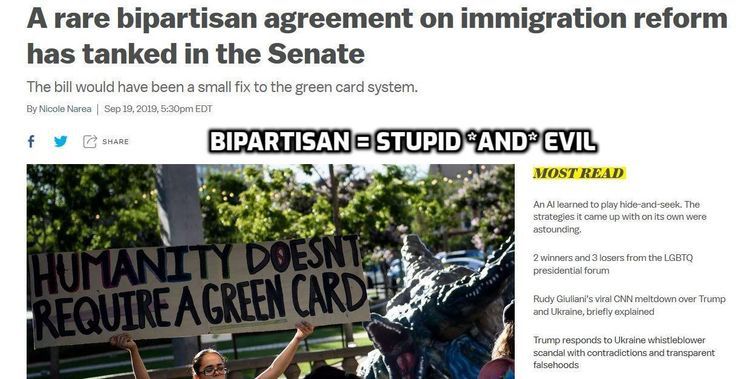 The Fairness for High-Skilled Immigrants Act came before the Senate once again on Thursday [A rare bipartisan agreement on immigration reform has tanked in the Senate, by Nicole Narera, Vox, September 19, 2019]. The bill would eliminate country caps on visas, which prevents one or two nationalities from dominating our immigration system. The elimination would most benefit Indians and Chinese, with Indians estimated to receive at least 75 percent of all employment-based visas under the act. Besides Indians and Chinese immigrants, Big Tech is the biggest champion of the bill--the industry wants its cheap foreign labor. The House overwhelmingly passed the bill in July; only 57 Republicans and a handful of Democrats voted against it.

On Thursday, Utah Sen. Mike Lee, the bill’s number one Senate proponent, called for a unanimous consent vote. Perdue killed that procedure with his objection.

Unfortunately, Lee is not daunted and promises another vote next week. He says he will work to assuage concerns before the next vote. Earlier this year, the bill was blocked by Sen. Rand Paul, who objected to how the bill would harm the nursing industry. Perdue said he blocked the bill due to unspecified industry concerns.

Whatever the reason for blockage, it’s good that a few good Republicans stand up to it. Perdue has demonstrated he is one of the best, if not the best, senator on immigration. He co-sponsored the RAISE Act and aggressively fights to resolve illegal immigration. His stand against the Fairness for High-Skilled Immigrants Act makes him better than Tom Cotton, his fellow RAISE Act co-sponsor. Cotton supports the bill because “skilled immigrants should be able to earn green cards in a timely manner, regardless of the country they came from—enabling them to further contribute to our communities.”

That’s ridiculous. American interests should come first, not the interests of immigrants.

Besides acting as a cheap labor giveaway, the Fairness for High-Skilled Immigrants Act Act is terrible because, as the Watcher previously wrote:

[T]the legislation will exacerbate the chain migration that is flooding the United States with Third World immigrants. That’s because it more than doubles, from 7 percent to 15 percent, “family visas” that permit one legal immigrant to bring in relatives (more than 90 in some recorded cases!)