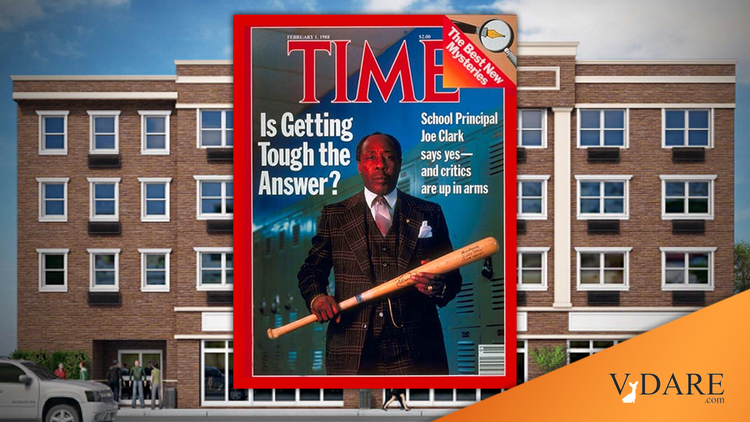 We're reprinting this column Peter Brimelow wrote for the Times of London, in which he attempted to explain America to Britons. Joe Louis Clark, the main subject of this column, was the black principal of a dangerous high school in Paterson, NJ, and later the subject of the movie Lean On Me, with Morgan Freeman. He died on December 29 of last year. [Joe Clark, the baseball bat-wielding principal who inspired the movie 'Lean on Me,' dies at age 82, by Laura Ly and Joe Sutton, CNN,  December 30, 2020]

Clark, born 1938, was living in retirement in Florida, before his recent death at age 82. He was big news in the 1980s. As always, any improvement on minority education is considered worth a movie, featuring either a Nice White Lady or a charismatic male minority educator. But the real story here is about the pushback against Clark by the Left.

Peter Brimelow says below that

important elements in the American political elite have extraordinary difficulty with anything to do with the use of police power in society. Thus for them a tough black school principal instantly conjures up, however incongruously, the spectre of Hitler, or at least of the Tsar. So powerful is this reaction that they would rather cede the streets of New York to muggers, and let the public school system collapse (having removed their own children, of course), than accept that a few must be punished for the good of the many.

“Our century should have taught all of us harsh lessons about the temptation of turning to extra-legal methods or to the 'man on the horse' to solve difficult social problems.” 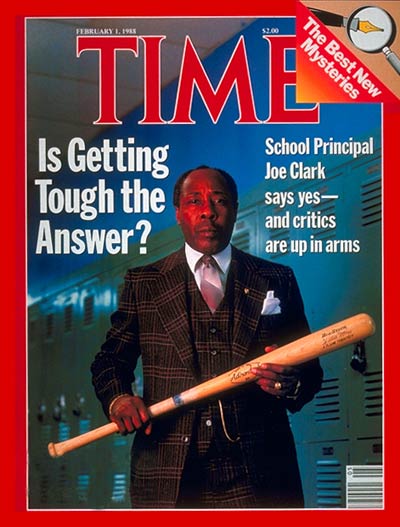 This sententious sentiment from The New York Times was inspired by Joe Clark, a high school “principal” (American for headmaster) in Paterson, New Jersey. Clark has not yet actually ridden a horse down the corridors of his educational establishment. But he does patrol them with a megaphone and a baseball bat. And he expels pupils he regards as trouble-makers. This has brought him into a nationally publicized confrontation with his Board of Education.

Mr Clark is black, and virtually all of his pupils are either black or Hispanic—mestizos from Latin America. His school, before he took it over five years ago, was described by law enforcement officials as “a cauldron of terror and violence”.

British readers should note that this is hardly a figure of speech. Weapons are regularly carried in American ghetto schools. Pupils rob, rape and murder each other and, from time to time, their teachers. This, not just racial prejudice, is why white parents bitterly resisted school integration.

William J. Bennett, the Reagan administration’s Secretary of Education, has singled out Clark as a praiseworthy example of the type of “leadership” he advocates in America’s schools. The White House has even suggested that Clark might like to join President Reagan’s staff. But his critics are equally vigorous. They argue that Clark has not improved educational results much in his school, that expelling maladjusted and failing pupils merely transfers the problems to the streets, and that anyway he systematically ignores the strict procedures that are supposed to govern the exercise of this supreme scholastic sanction.

Some of Clark’s actions undoubtedly appear bizarre to whites, although they are in the tradition of charismatic leadership that seems to be a distinct cultural pattern among American blacks—witness the Democratic presidential contender, Jesse Jackson. Drawings of Clark as Batman fighting off drug dealers hang in the halls. There are reports that he intimidates and forces out teachers, sometimes with extravagant public denunciations, and last year he flatly refused to allow a state monitoring team into the building. But he does appear to be genuinely popular with his pupils—the ones that are left, of course.

What’s really interesting about the kerfuffle is not the pedagogy but the politics. Clark’s methods have caused a storm while principals in whose schools pupils learn nothing and might get killed (but not expelled) plod undisturbed towards their pensions.

This is because important elements in the American political elite have extraordinary difficulty with anything to do with the use of police power in society. Thus for them a tough black school principal instantly conjures up, however incongruously, the spectre of Hitler, or at least of the Tsar. So powerful is this reaction that they would rather cede the streets of New York to muggers, and let the public school system collapse (having removed their own children, of course), than accept that a few must be punished for the good of the many.

The New York Times, voice of those elite elements, regretted editorially that Paterson did not have special schools for its ineducable minority. Money can be a substitute for moral courage. But if Clark defied Board of Education efforts to reinstate expelled students, the newspaper concluded unhappily, there would be no choice but to discipline him—for not respecting the students “constitutional right” to “due process.” This extraordinarily expansive reading of the US Constitution illustrates the extent to which it has become a Rorschach Blot for liberal neuroses.

Significantly, my opening quotation is not from the paper’s editorial but from a column by Albert Shanker, the highly intelligent president of the American Federation of Teachers. Shanker’s tough-mindedness as a union leader is so notorious that he has been immortalized in the Woody Allen film Sleeper as starting a nuclear war over a wage dispute. But even compared to him Joe Clark looks like a Cossack.