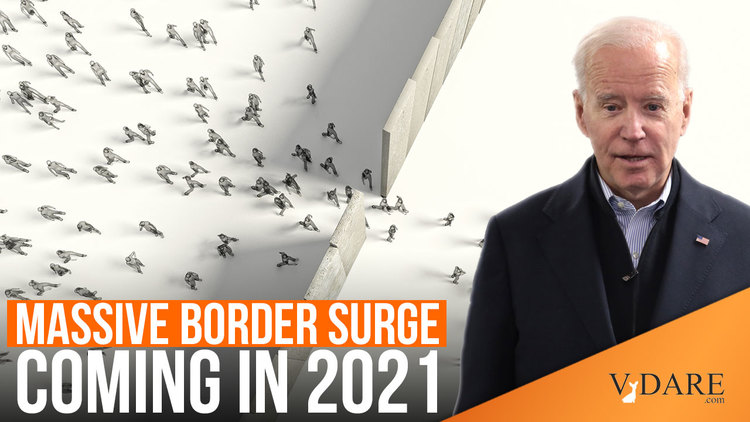 Immigration Issue Set To Flare Up In 2021

Immigration, the issue that elected Donald Trump in 2016 and dominated political discourse through much of his presidency, was missing in action in his campaign against “President-elect” Joe Biden [Immigration was a dominant issue in the 2016 election, but not this time, by Hannah Miao, CNBC, October 13, 2020]. The economy, the Wuhan Flu, Black Lives Matter, and civil unrest dominated. The Main Stream Media couldn’t have been happier, unless COVID had actually sent Trump the way of all flesh [Trump Tests Positive for the Coronavirus, by Peter Baker and Maggie Haberman, The New York Times, October 2, 2020]. But if anything the crazy events of 2020, including the post-election illegal-alien Biden Rush for the border, have intensified the importance of stopping immigration. There is every reason to think the issue will flare up again in 2021.

Granted, those polled were asked only about temporary measures. But still, the overwhelming majority viewed immigration as a threat.

Pathetic attempt to shift blame from his Visible Incompetence to an Invisible Enemy. The President needs to reread the Declaration of Independence, criticizing King George for restricting immigration to America. https://t.co/LO0OndE88A

But immigration should have been an election issue even apart from COVID. Yet their squabble over the China travel ban was one of the few times the two candidates mentioned it. Of course, Biden and the Democrats didn’t want to talk about immigration because they knew their radical agenda would alienate normal Americans. That’s exactly why Republicans should have talked about it.

Trump did refer about the dangers of illegal immigration, refugees, and occasionally legal immigration, such as the Tennessee Valley Authority’s crooked use of H-1b migrants. But he didn’t hammer it enough. And, inexplicably, he never touted his temporary immigration moratorium. He even extended and expanded it to prohibit most guest workers in June. But he mentioned only once for the rest of the year. Maybe Javanka and other advisers are to blame. Whatever the case, Trump could have made immigration the decisive issue. He didn’t, which was why the election was close enough to steal.

Nevertheless, immigration will be a major topic in the new year. Already, it’s a problem for Biden. Recall that he promised to push through his radical immigration agenda, including an Amnesty, within 100 days. His plans also include dismantling Trump’s executive immigration restrictions, which will bring more foreign competition into our country as the economy struggles to recover from the pandemic.

Though a massive border surge is expected when Biden enters office, U.S. Customs and Border Protection is already reporting a serious uptick in border apprehensions. In the first two months of fiscal 2021, agents have detained or apprehended more than 140,000 illegal aliens [Southwest Border Migration, CBP.gov]. One expert says they “believe that a new administration will open the borders and give them an opportunity to stay”—which means a permanent border crisis might be the defining feature of a Biden administration [As Biden Prepares to Take Office, a New Rush at the Border, by Miriam Jordan, New York Times, December 13, 2020].

So now, realizing another illegal-alien tsunami could destroy his presidency, Biden is stealthily retreating from some of his crazier immigration proposals [The Biden Plan for Securing Our Values As a Nation of Immigrants, Biden.com]. Recently, he flip-flopped and said he would not immediately erase Trump’s immigration policies. “The last thing we need is to say we’re going to stop immediately the, you know, the access to asylum the way it’s being run now and end up with 2 million people on our border,” he told reporters. Biden said he would enact his immigration agenda within six months rather than on Day 1 [Joe Biden says fast immigration changes could cause ‘2 million people on our border,’ by Steven Nelson, New York Post, December 22, 2020].

In other words, he knows his policies will be disastrous, and hopes slower change will prevent a rush to the border. But only tough enforcement, such as immediate deportation and a no-asylum policy, can do that. Unfortunately, Biden is still committed to open the America’s borders, whether in the first 100 days, six months, or two years.

The obvious move for the GOP as the border rush and border chaos develops and midterms approach: blame Biden. Democrats couldn’t do that to Trump during the border surge of fiscal 2019 without infuriating a key bloc of voters: immigrants. Republicans should hang the looming disaster around Biden’s neck. Immigrants don’t vote for the GOP anyway.

Another problem for Sleepy Joe: Trump’s immigration moratorium is popular. Trump extended it for another three months on Thursday [Trump Extends Order Halting Visas to Prioritize Americans for U.S. Jobs, by John Binder, Breitbart, December 31, 2020]. Will Biden scrap it and put himself at odds with two-thirds of America? Americans will wonder why their political elites, and newly-elected president, oppose such a common-sense idea.

And don’t forget that forthcoming Amnesty fight. If Republicans win in Georgia next week, it probably will be dead. But even if Republicans lose, it’s no sure thing. As I’ve written previously, Republicans are far less enthusiastic about Amnesty, Democrats are more divided on it, and Biden has less political capital than Barack Obama. A fight about Amnesty will define the politics of 2021 and affect the 2022 midterms. Republicans who back it risk primary challenges; Democrats in purplish districts might lose their seats.

The main challenge for immigration patriots in 2021: stopping the GOP Establishment from resetting to the status quo and attempting to bury Trumpism for good. Senate Majority Leader Mitch McConnell and his compatriots want a return to Business First. Dealing with Biden, they think, is more important (and profitable) than representing their constituents.

But the world created by 2020’s events—from the pandemic to BLM riots—makes that reset nearly impossible. The Paul Ryan agenda is dead as far as rank-and-file Americans and Republicans are concerned—above all, for immigration patriots.

2020’s key afflictions were the dangerous diseases of globalism, immigration, and Open Borders. America First Nationalism is the cure. If the Stupid Party Establishment doesn’t swallow that medicine in 2021, it will die.