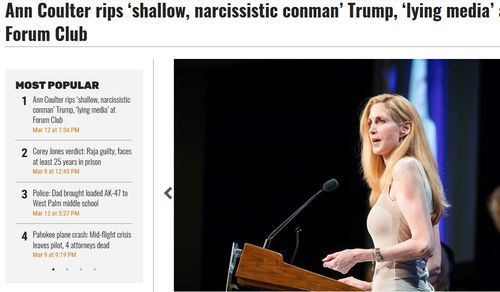 Ann Coulter: Trump By The Numbers

Earlier by Ann Coulter: Trump's Failing On Immigration. Don't Ask Me To Lie About It

It is now clear that Trump isn't waiting for a better moment. This was not an anomaly. It's not an accident.

After he signed his third spending bill with no wall funding, which he claims to need, all sentient beings were forced to conclude that the president has no intention of ever doing anything we wanted on immigration.

In fact, Trump is steadily moving in the precise opposite direction of what he promised.

Illegal immigration is on track to hit the highest levels in more than a decade, and Trump has willfully decided to keep amnesty advocates Jared, Ivanka, Mick Mulvaney, Marc Short and Mercedes Schlapp in the White House. For all his talk about immigration, did he ever consider hiring people who share his MAGA vision?

A (diminishing) percentage of the base is annoyed when I point this out. They think that the moment something comes out of Trump's mouth, IT HAS HAPPENED.

Yes, Trump talks a good game. He's like a waiter who compliments us for ordering the hamburger, but keeps bringing us fish. The hamburger is our signature dish, juicy and grilled to perfection, you've made a brilliant choice ... now here's your salmon.

If he refuses to do what we hired him to do, he's not getting a good Yelp review.

I've decided to discuss the Trump presidency in purely mathematical terms. It's not his fault! He's trying! Never has a president been under such attack!—these are more in the nature of "excuses," not facts.

Under my new approach, I will provide a numerical evaluation of the Trump presidency, which I call:

TRUMP BY THE NUMBERS!

No editorializing, no invective, no opinion.

NUMBER OF MILES OF WALL BUILT ON OUR SOUTHERN BORDER SINCE TRUMP HAS BEEN PRESIDENT:

NUMBER OF MILES OF FENCE, BOLLARD OR GARDEN TRELLIS BUILT ALONG OUR 2,000-MILE BORDER SINCE TRUMP HAS BEEN PRESIDENT:

NUMBER OF TIMES TRUMP HAS CLAIMED ON TWITTER HE'S ALREADY BUILDING THE WALL:

NUMBER OF TIMES TRUMP HAS COMPLAINED ON TWITTER THAT CONGRESS WON'T GIVE HIM FUNDS TO BUILD THE WALL THAT HE SAYS HE'S ALREADY BUILDING:

NUMBER OF WALL "PROTOTYPES" DESTROYED BY THE FEDERAL GOVERNMENT:

NUMBER OF EXECUTIVE ORDERS ENDING THE ANCHOR BABY SCAM—AS TRUMP PROMISES WHENEVER AN ELECTION IS COMING:

NUMBER OF ILLEGAL ALIENS WHOSE PRESENCE HAS BEEN EXCUSED BY TRUMP:

11 TO 50 MILLION (depending on whether you believe the propaganda or the facts).

NUMBER OF EXTENSIONS OF THE E-VERIFY SYSTEM TO PREVENT ILLEGALS FROM BEING HIRED OVER AMERICANS:

NUMBER OF H-1B FOREIGN WORKERS IN THIS COUNTRY WHEN TRUMP TOOK OFFICE:

NUMBER OF H-1B FOREIGN WORKERS IN THIS COUNTRY TODAY:

NUMBER OF TOP-LEVEL ADMINISTRATION JOBS OFFERED TO IMMIGRATION CONTROLLERS WHO ARE NOT NAMED "STEPHEN MILLER":

FIVE THAT I KNOW OF.

NUMBER OF ATTORNEYS GENERAL TRYING DESPERATELY TO IMPLEMENT TRUMP'S IMMIGRATION AGENDA WHOM TRUMP MOCKED AND FORCED OUT OF OFFICE:

Apart from immigration, probably the single most important campaign promise Trump made was to end the carried interest loophole. Most Republicans would break out into a cold sweat if asked to raise taxes on George Soros. FINALLY, we had a Republican (or Democrat) who wasn't beholden to Wall Street!

During the campaign, Trump said this tax scam allowed hedge fund managers to "get away with murder" and vowed to eliminate it. Americans who hadn't voted for 30 years said: How do I register to vote?

Let's take out the slide rule!

TOTAL CAMPAIGN CONTRIBUTIONS IN 2016 GIVEN BY GOLDMAN SACHS TO HILLARY CLINTON:

TOTAL CAMPAIGN CONTRIBUTIONS GIVEN BY GOLDMAN SACHS TO TRUMP:

7—or "more than Presidents Bush and Obama combined."

(For someone unable to fulfill the most basic of his immigration promises, Trump has been amazingly competent in accomplishing the things Wall Street wanted, but no one else did.)

NUMBER OF ACTIONS TAKEN TO DEFEND THE FREE SPEECH RIGHTS OF TRUMP'S BIGGEST SUPPORTERS BEING DEPLATFORMED AND CENSORED, SUCH AS MILO YIANNOPOULOS, GAVIN MCINNES, LAURA LOOMER AND ALEX JONES:

PERCENTAGE OF THE BASE THAT TRUMP CAN AFFORD TO LOSE IN 2020, AFTER MILLIONS OF OLDER, WHITER AMERICANS HAVE DIED OFF, AND MILLIONS OF IMMIGRANTS HAVE TURNED 18 AND BEGUN VOTING: