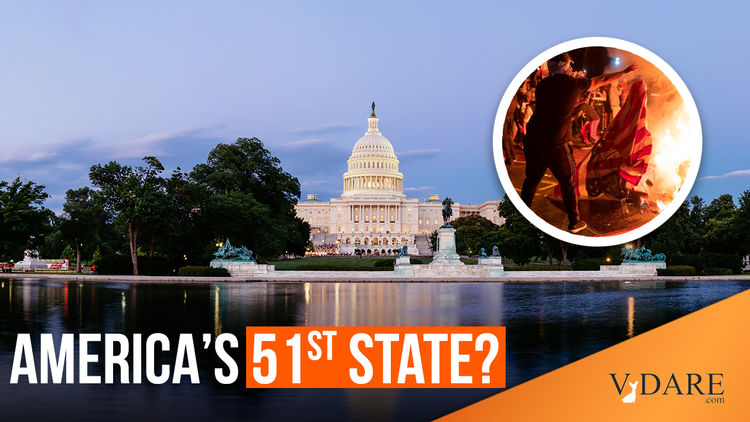 Patrick J. Buchanan: Why DC Statehood Is a Suicidal Gamble

When U.S. cities erupted after the death of George Floyd, D.C. Mayor Muriel Bowser was in the vanguard of the protests, renaming a section of downtown Black Lives Matter Plaza, and painting the name in letters on the street so huge they could be seen from space.

Thursday, however, Bowser awoke to those same BLM protesters yelling outside her home, denouncing a "D.C. police murder of a Black Man," and demanding the mayor fire Police Chief Peter Newsham.

18-year-old Deon Kay had been shot and killed Wednesday afternoon in an encounter with cops. While this was the fifth shooting by D.C. cops this year, it was the first fatality.

There have been 130 other homicides in D.C. in 2020, mostly of Black folks that involved other Black folks, and not the cops.

"We believe the suspect had a gun at the time," Newsham told reporters. Witnesses challenged the chief's claim.

But this is only the latest problem bedeviling Bowser.

While she has been blaming "outside agitators" for the mayhem in the city, the Washington Times reports that 82% of the 541 people arrested for riot-related crimes were residents of D.C., Maryland or Virginia.

On Tuesday, the mayor's office made national news by releasing a list [PDF] of monuments and memorials in Washington that should be "removed, replaced or contextualized." Among them are the Washington Monument, the Jefferson Memorial and Columbus' statue at Union Station.

The name of Alexander Graham Bell should be erased from Bell Multicultural High School, Bowser's working group said. Like Winston Churchill and Justice Oliver Wendell Holmes, the inventor of the telephone believed in eugenics.

Presidents James Madison, author of the Constitution, John Tyler, who annexed Texas, and Zachary Taylor, who led the U.S. army to victory in the Mexican-American War, are also candidates for having their memorials and monuments "replaced, removed or contextualized."

Woodrow Wilson's name should be removed from Wilson High, and the names of Founding Father Ben Franklin and author of the national anthem Francis Scott Key should be erased from buildings named in their honor.

Eleanor Holmes Norton, the D.C. nonvoting representative in Congress, explained that the working group formed by Bowers to look into monuments and memorials did not mean the statues were to be pulled down but that plaques should be added informing visitors that these sites are dedicated to men who had a perverted view of human rights.

Norton wants the Emancipation Proclamation statue featuring Abe Lincoln and an unshackled slave, unveiled at an 1876 ceremony attended by President Grant, at which Frederick Douglass spoke, removed. She also wants the statue of Andrew Jackson in Lafayette Square removed.

Yet, it was General Jackson who saved the Union from being torn apart at the 1815 Battle of New Orleans, while the defenders of Washington and the White House fled from the attacking British, letting the nation's capital be burned in August of 1814.

D.C. officials are today running away from the plans of the mayor's working group, but those plans testify powerfully to what an act of folly and a capitulation to political correctness it would be for the Congress to vote statehood for D.C., as Nancy Pelosi's House did this year.

D.C. is unrepresentative of America and undeserving in any way to be raised to statehood. Since given the franchise 60 years ago, it has never voted Republican for president. Its three electoral votes have gone to the Democrats in every election since LBJ in '64. Republican nominee Donald Trump got 4% of the D.C. vote. Hillary Clinton got 90%, a margin of 22-1.

Moreover, D.C. has a smaller population than 19 other American cities and is smaller in geographic size than 150 other U.S. cities. Rhode Island, our smallest state, is geographically 20 times the size of D.C.

The D.C. government has been in the headlines countless times for personal scandals and financial crises. One four-term mayor, Marion Barry, was sent to prison and returned to be reelected to office.

As for D.C. public schools, the problem is not that they are named for presidents but that they produce some of the lowest test scores in the nation.

More significant, as the protests, attended by riots since May, have shown, the D.C. government, a hostile province when a Republican is in the White House, is the domicile of a permanent regime of leftist and radical media, tens of thousands of federal and city bureaucrats, lawyers and lobbyists, all yoked to big government.

As the "peaceful protests" of June and July showed, with Georgetown sacked and statues demolished, D.C.'s government is an incompetent custodian of the nation's historic monuments and memorials, and incapable of protecting the White House.

What does Joe Biden, who approved of the removal of statues of Confederate soldiers, generals and statesmen, think of D.C.'s scheme to "remove, replace or contextualize" the statues of so many men who held the office he now seeks?