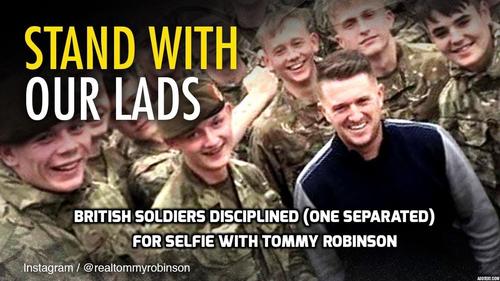 Proud Boy Persecution Shows Street Fighting Has Arrived In America. Next, The Military?

The level of political violence in the U.S. is rising. The main reason for this, of course: the license given by our Establishment to the Antifa movement of Communist thugs. But will violence spread from the streets to the soldiers? I know, it sounds crazily apocalyptic. But it’s being discussed in Britain.

Twice recently—in Charlottesville last year, and in Portland, Oregon two weeks ago—we have seen municipal police forces deliberately stood down by their political superiors so that Antifa could control the streets. The Establishment's media shills either find a way to frame the subsequent violence as someone else's fault, as at Charlottesville, or else they just ignore it, as in Portland.

That is the context in which to evaluate the clashes in New York City on October 12 between Antifa activists and Gavin McInnes's Proud Boys.

Gavin, who is a friend of mine, was to speak at the Metropolitan Republican Club on the Upper East Side. A few hours before his appearance, Antifa vandalized the building, breaking a window and spray-painting anarchist symbols. [Republican club on Upper East Side vandalized, by Katherine Lavacca, Larry Celona and Ben Feuerherd, NY Post, October 12, 2018]Gavin showed up and spoke anyway, but his appearance was followed by street fighting between Antifa and Proud Boys.

New York State's corrupt and cynical Governor Andrew Cuomo, a puppet of the far-Left public-sector unions, blamed it on McInnes, who is just a guy with opinions outside the Narrative.

The New York Times report was bare-faced Establishment propaganda: they report, for instance, that Gavin brandished a sword, without telling their readers it was a plastic sword, a theatrical prop for some point Gavin wanted to make in his talk. [Proud Boys Fight at G.O.P. Club Spurs Calls for Inquiry; Cuomo Blames Trump, by Ashley Southall and Tyler Pager, October 14, 2018]They describe the Proud Boys as, quote, "a far-right group" but Antifa as … what, do you think? "A far-left group"? No, as "anti-fascist activists," taking them at their own evaluation. They're fighting fascism, you see? Just like the lads who stormed the Normandy beaches on D-Day.

They even tell us with a straight face that the Proud Boys have been "deemed a hate group" by (yes!) the Southern Poverty Law Center. "Deemed": that's one of those words like "espoused" that CultMarx journo-bots have set up as single-key macros.

Details aside, the interesting thing about these scuffles is that the fighting here seems to not have been, or not entirely have been, defensive on the part of the Proud Boys, as was the case with Unite the Right in Charlottesville. The Proud Boys were willing to fight back.

So the question arises: Are we moving into a zone where street fighting between political groups becomes normal?

Antifa have had the streets pretty much to themselves up to now, courtesy of cowardly political leaders. Actions generate reactions, though. It wouldn't be terrifically surprising to see more groups like the Proud Boys coming up, ready and willing to fight.

The New York Times, which to the best of my knowledge has never printed a single word critical of Antifa, will denounce them as Nazis and appeal to the Southern Poverty Law Center for Hate Group designations. Which is why New York law enforcement is now hunting down and jailing the Proud Boys, while doing nothing whatever about Antifa.

But you can only push people so far before they push back. (You can donate to the Proud Boys legal defense here.)

And back of my question about the forthcoming normalization of political street fighting, is a bigger, darker one.

Suppose these street fights escalate to a serious, major breakdown of public order, serious enough to need the attention of the military. Will the military stand neutral? If not, if they take a side, which side will they take?

I have a news story here for your consideration, a story from across the Pond, from the old country.

Backstory: recently the English Dissident-right activist Tommy Robinson, who I'm sure needs no introduction to VDARE.com, by chance encountered a group of young soldiers, recent recruits, at a freeway service area outside London. The soldiers recognized Tommy—he's been in the news a lot—and surrounded him, cheering and singing his name.

Robinson took video of the encounter and posted it on the internet.

The British Army was not happy. Honked an Army spokeswoman: "Far-right ideology is completely at odds with the values and ethos of the armed forces."

One of the soldiers in the video has been discharged from the service. The soldier, claimed the Army, had had previous disciplinary problems and this was the last straw.

Well, maybe. Voltaire's remark about the execution of Admiral Byng comes to mind, though; so does a certain Chinese idiom about killing a chicken to scare the monkeys.

We don't know the name of the soldier who was discharged. He's being referred to as "Soldier X." And now there's a Twitter hashtag #IAmSoldierX with a following among the squaddies.

One group of them—in uniform, but faces not showing—have produced a video of themselves holding up a big #IAmSoldierX sign.

They can’t discharge us all!

The British Army senior staff, meanwhile, are putting out tweets saying The Army needs more feminists, and recruiting videos dwelling on how respectful the service is to the prayer requirements of Muslim soldiers. 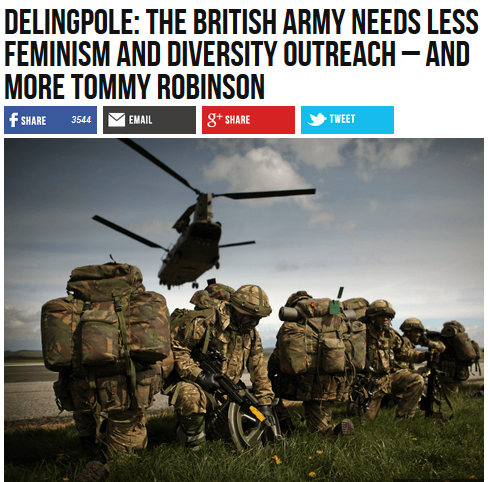 I can't improve on James Delingpole's summary at the end of his Breitbart.com piece about this [October 18, 2018], with apologies for the British slang:

The Army's Top Brass are where the rest of the Establishment are: terrified of doing anything that might upset the Religion of Peace; painfully eager to give the Army some kind of post-conflict-era relevance as an agency for diversity and gender outreach and mindfulness. And the squaddies are all thinking: sod this for a game of soldiers—I didn't join the Army for this bollocks.

Does anyone normal blame them?

The subtitle on Delingpole’s article:

SOONER OR LATER THERE IS GOING TO BE A MUTINY IN THE BRITISH ARMY.

Well, that's all happening over there. What's the correlation of forces over here?

I can offer only one data point: a person I am quite closely acquainted with—no names, no pack drill—who finished a four-year term a few months ago in one of the more strenuous combat arms of the U.S. Army.

How did political sympathies run among his comrades in the 2016 election? I asked him. The grunts, not the cooks and the clerks and the officers. Pro-Trump, pro-Hillary, didn't care: what was the breakdown?