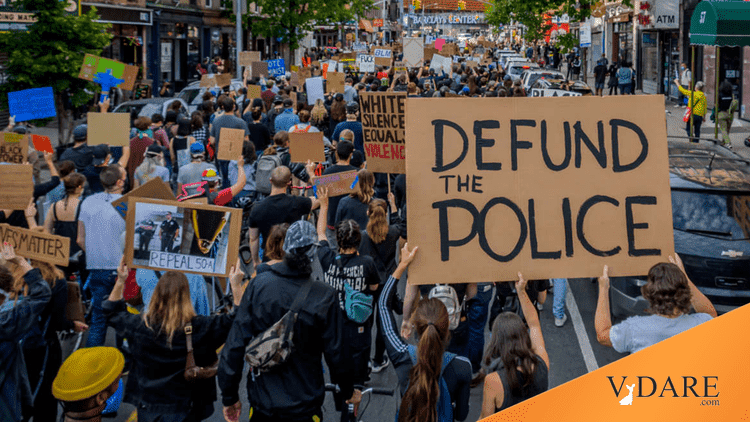 Newly painted in huge yellow letters on 16th Street, just north of the White House, is the slogan: "Defund the Police."

That new message sits beside the "Black Lives Matter" slogan, also in huge letters, painted there at the direction of D.C. Mayor Muriel Bowser.

Still, the messages are less ominous than the chants of protesters in New York after the takedown that resulted in the death of Eric Garner.

Protesters then chanted of the NYPD: "What do we want? Dead cops. When do we want it? Now!"

While this sudden campaign to defund and dismantle city police forces seems an absurdity, it is actually part of a thought-out radical program that has gained momentum since the sadistic public execution of George Floyd in Minneapolis two weeks ago.

Consider. On Sunday, nine members of the city council, a veto-proof majority, voted to disband the Minneapolis police department. Asked if he would support the council decision, Mayor Jacob Frey hedged, "I do not support the full abolition of the police."

As the crowd jeered and booed, the mayor walked away alone.

The idea of defunding police departments has caught fire, and liberal politicians are scrambling to get in front of their radical constituents. Los Angeles Mayor Eric Garcetti has announced that he will reallocate up to $150 million from the LAPD budget to social programs.

New York Mayor Bill de Blasio says he will be transferring $1 billion: "We will be moving funding from the NYPD to youth initiatives and social services."

In two weeks, there has been a sea change in attitudes toward police, with not a few coming to share the hard left's hatred. While the criminal elements burned cop cars and showered police with bottles, rocks and bricks, even "peaceful protesters" were calling the police fascists and racists.

Two decades ago, the NYPD were celebrated "first responders" who ran toward the collapsing twin towers, many never to come back. Funerals of the cop heroes were televised. Those days are gone.

Indeed, after two weeks of seeing police decried on nightly TV as racist oppressors of African Americans, cops must realize that they are reviled and detested by some of the countrymen they have sworn to protect.

What will happen now is predictable, as it has happened before.

To pander to the militants on the left, liberal politicians will devise new restrictions on cops and more severe punishments for infractions, treating the police as potential threats to civil and constitutional rights.

The "Ferguson Effect" will take hold. Cops will back off from confronting the lawless and violent. Criminals will see an opening to seize opportunities. The urban poor who look to the police as their only protection will stay inside and lock their doors. And small businesses, realizing the cops may not be there, will sell and move out.

Where is this leading?

According to former New York City Police Commissioner Bernie Kerik, not only did New York law enforcement officers suffer many injuries in the riots, hundreds of cops, seeing how they are regarded and were treated by many whom they protect, are preparing to leave the NYPD.

As the Democrats' "police reform" bill is debated on the Hill, Republicans will largely stand with the police and Attorney General William Barr, who said Sunday that while there is racism in America, there is no "systemic racism" in the nation's police departments.

If there were, it would be an indictment of the Democrats, who have run most of our great cities for decades.

As it rises in prominence, the issue of defunding police will divide the Democratic Party more than the GOP.

For while the hard left sees cops in ideological and class terms as racist and fascist, the right, by and large, sees the police as the last line of defense again the anarchy we saw erupt when there were not enough cops in New York and D.C. to control the mobs looting Fifth Avenue and Georgetown.

And this, too, is likely to become a forever war in America. For it is almost inevitable that we are going to see more violent collisions between white cops and black suspects, collisions that result in deaths.

For every large urban police force has daily encounters with black male criminals, who commit a disproportionate number of violent crimes. Some will end with dead cops, and the others with dead criminals.

President Donald Trump has taken his stand with the police.

It is Joe Biden who has the problem. For while Democratic mayors are unlikely to join a campaign to abolish their police forces, Biden is going to have to tell his Bernie Bro and socialist constituents that their ideas for getting rid of police departments are ridiculous.

Monday, Joe made a start. He said that defunding cops is off the table.