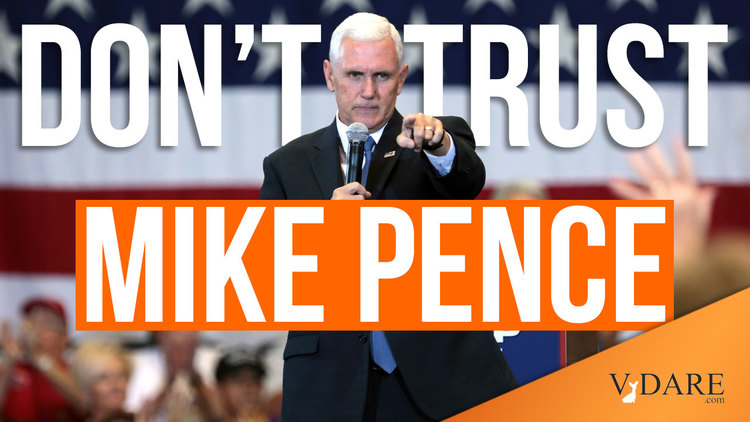 A Reader Says Pence Has Always Been Untrustworthy, And Can Be Expected To Be So On January 6

From: A OneOldVet Fan [Email him]
In the last week, many people have speculated upon what type of person Mike Pence is and what his actions will be on January 6th and the electoral votes.
Years ago, immigration patriot and news aggregator Allen Taylor of OneOldVet.com  had an opinion of Pence .(See R.I.P. ONE OLD VET—A Great Patriot, Fallen In Arms) Residing in Indianapolis and being familiar with state politics (Pence was governor of Indiana at the time), Mr. Taylor had a deeper insight into Pence's political proclivities than most. His opinion: Pence was not a man to be trusted and more or less part of the corporate establishment.
Also worth noting, Pence is expected to board a plane and leave the country immediately following the vote on Jan. 6th. Coincidence?
James Fulford writes: I doubt if anything can be done at this point to keep Biden from being sworn in, but if plans to stop it involve Pence standing like a stone wall, then new plans are needed.
One Old Vet (Allen Taylor) died August 23rd, 2016,  and his blog is gone from the web, but still available in Archive.org. His opinion of Pence can be read here:  The Mike Pence I Know, Posted on July 6, 2016
Patrick Cleburne quoted it here:

In choosing Mike Pence as his running mate Donald Trump has made a serious blunder as Ann Coulter warned. And the best that can be hoped is that it is just a mistake, and that Trump has not been betrayed...

Last week One Old Vet, a veteran of Indiana politics,  reposted The Mike Pence I Know relating a conversation with him in which he directly lied about his 2006 proposal

Pence personally assured me that he would never support amnesty nor any legislation that rewarded ILLEGALS. He lied. In May of this year (2013) Mike Pence signed into Indiana law a bill that provides in-state tuition for ILLEGAL aliens. We can expect more of the same hispandering and semantic game playing from him that we”ve seen from other RINOS like Graham, McCain and Rubio. [Read the whole thing.]

For more of what we've thought of Pence over the last 15 years, when he went from Amnesty-proposing Congressman to Governor to VP (against our specific advice) see

When I say "against our specific advice," I mean it: see NO To “Hapless Jackal” Mike Pence Too! Trump Has Better VP Choices.