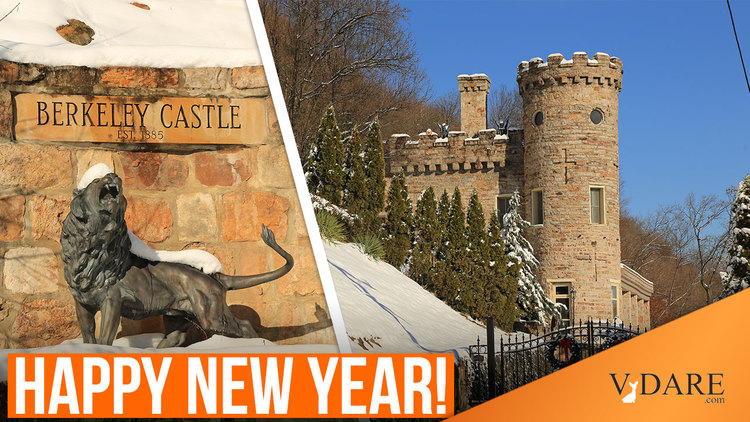 Happy New Year From VDARE.com—The Lies Of 2020, And The Truth We Promise You

I write a New Year's Message every year here, and say things like 2014 Was The Year Of Dave Brat (the immigration patriot professor who beat GOP House Majority Leader Eric Cantor in his own district) or 2016 Was The Year Of Miracles, one of which was the election of Donald Trump.

The China Virus Lie: It was "racist" to say that the virus came from China. In fact, the wet markets are a cultural rather than racial failing of China. A Chinese child raised by American parents may inherit math abilities, but he won't experience a desire to eat bats.

The Ahmaud Arbery Lie: The "jogger" was an ex-convict who had spent five years in jail for being a gunman. Not having a gun, his last act was to attempt to seize a shotgun held by a former policeman trying to protect his neighborhood.

The George Floyd Lie: Floyd, 6' 7", was being restrained for the public safety after being arrested for a Federal crime (passing counterfeit money). His statement that he "couldn't breathe" was obviously false: the instant your windpipe is compressed, you can't talk, as anyone who's ever taken Judo knows. He probably died from swallowing drugs, something he'd done before, and indicated by the police autopsy.

All of that led to the George Floyd Riots based on the “Black Lives Matter” blood libel against white America.

Probably the biggest, boldest, bloodiest, most obvious lie was

The "mostly peaceful" thing was the craziest thing I've seen in years.

The point is that the Main Stream Media is now more or less completely lie-based. I've seen them lie for 40 years about black crime, gun control, "racism", the Vietnam War, and other things, but never like this, a regime in which anyone who doesn't give in to the lies loses his media job.

For the last 20 years, we here at VDARE.com have been telling the truth, with links to original documents to prove it.

We're going to keep going, and keep telling the truth, in the next year, the next decade, and as long as we can, with our readers' help.

One positive note: this year, America achieved, albeit temporarily,  an employment-based Immigration Moratorium, something we couldn't even get discussed in the Great Recession.

In that spirit of not giving up, we wish all our readers a Happy New Year!