Is President Trump depending on the general lameness of the 2020 Democrats — the Cuba-loving commie and the senile gasbag — to assure his re-election?

Unfortunately for the American people, the president cannot honestly campaign on his record of immigration enforcement to attract voters, though he promised a lot of policing in the beginning of his term. But his record is simply not strong.

He has depended on Mexico to keep out the thousands from Central America and beyond—a deal which appears to be weakening as a result of left-leaning judges.

There is no universal e-Verify (which would be more effective than the border wall), even though he had a Republican congress for two years but refused to poke the useless Speaker Paul Ryan into action on that issue.

Another unfulfilled Trump promise was ending the H-1b visa which has been used to replace thousands of well-educated citizen tech workers with cheapie foreigners, often Indians.

Below, in 2015 former Disney employees Dave Powers and Leo Perrero told their stories of being summarily laid off by the company to make way for H-1b workers whom they were forced to train. 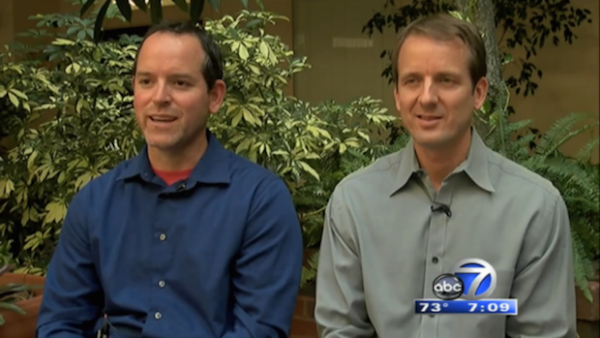 On Wednesday, Tucker Carlson examined the H-1b issue and the continuing pain it causes to American tech workers. 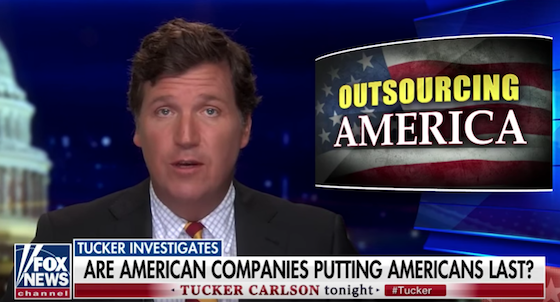 Perhaps President Trump will see the segment and do more to fix the harmful legislation—after all, this is an election year.

TUCKER CARLSON: President Trump travelled to India last week to meet with that country’s Prime Minister, Prime Minister Modi. One of the central issues at their meeting was the H-1b visa program. that program doles out roughly 85,000 visas a year to foreigners so they can move to this country and take American jobs.

I’m not exaggerating, that’s what it does: the vast majority of these visas are given to people from India. As a candidate in 2016, Donald Trump called for ending this program entirely, but as president that hasn’t happened, though the Trump administration has made the visas slightly harder to get.

So why is the program still around? Why is it so durable? That’s an easy question to answer — it’s a favorite of tech companies which claim they simply can’t find any Americans skilled enough or smart enough to do tech work.

That’s a lie, a provable lie: companies routinely use H-1bs as a means to fire their existing American workers and replace them with lower paid foreigners. Often the fired workers are made to train their replacements before they’re terminated. The process for the replaced workers is painful and humiliating. Company executives tell them they’re being reassigned to a completely new company with a new role that consists of training people to do the job they once did. When they are not needed any more, they’re cast aside.

We recently spoke to some AT&T employees who are quote “rebadged” by the company to train cheaper replacements from India. Here’s their story:

CARLSON: This former AT&T employee spent nearly two decades at the company. A few months ago AT&T informed her that she was no longer needed.

CARLSON: She is one of many former AT&T workers who found out on corporate conference calls that she was getting what they called “rebadged” to a new company where she’s forced to train a low-cost foreign replacement.

AT&T EMPLOYEE: Today it’s my job: tomorrow it could be yours.

CARLSON: She expects to be officially fired within a year.

AT&T EMPLOYEE: What can you do? Who can you call? Who do you talk to?

CARLSON: Many have turned to Sarah Blackwell, an employment lawyer who represents American workers.

SARAH BLACKWELL: What AT&T is doing is they’re firing them and having them work for the companies so they are working for AM Docs, Accenture, IBM and Tech Mahindra, and they’re training their replacements there.

CARLSON: One former employee who is currently training his replacement told us that the new workers are all from one place.

FORMER AT&T EMPLOYEE (MALE): They are all from India. Most of them are from Hyderabad; some are from Mumbai.

CARLSON: Our producers obtained shocking documents from the training courses — PowerPoint slides with the AT&T and Accenture logos inform workers about Indian cultural customs and warn that Indian men will not shake hands with American women.

FORMER AT&T EMPLOYEE: We’re an American company, and we are literally giving away our legacy. We are giving away our knowledgebase. We can’t get those things back once we outsource all this.

CARLSON: AT&T boasts about its corporate wokeness outside its corporate campus in Dallas, but the company gave it soon-to-be former employees a list of approved topics for discussion with Indian replacements and urges them not to discuss India’s human rights record or religious conflict in India with their future replacements.

BLACKWELL: Their goal is to offshore as much as it can to low-cost countries.

CARLSON: Many companies say that the foreign worker visa program helps US companies deal with the worker shortage.

BLACKWELL: You would not be firing workers if you really had a shortage.

CARLSON: Many tech companies say that the H-1b hires are smarter than Americans and better workers too. One former worker wasn’t convinced.

FORMER AT&T EMPLOYEE: Some of the folks that we work with, they are very sharp, but we’ve got some of the dumber we would have to water them twice a week.

CARLSON: AT&T for its part isn’t going broke. To give you a sense of the company’s priorities, it’s spending a hundred million dollars on an extensive renovation of its headquarters.

FORMER AT&T EMPLOYEE: They said you do not get a severance package: you’re not eligible for one since we found you another job. That’s what we were told. We were also told that we would not get our annual bonus next year unless we agreed to work for Accenture.

BLACKWELL: When you’re watching so many people suffer at the hands of a few getting rich and no one’s protecting them, then people will stop thinking capitalism is the right thing to do.

CARLSON PRODUCER: Do you think that the people who run the company care about the workers?

CARLSON: A spokesman for AT&T denied that any of this is happening and assured us that anyone who’s been rebadged can return to AT&T at any time.

CARLSON PRODUCER: They say many of those employees have already been placed in new H-1b jobs.

FIRST FORMER EMPLOYEE: Wow. Where are they?

CARLSON PRODUCER: It hasn’t happened to you?

FIRST FORMER EMPLOYEE: It hasn’t happened to anyone, I don’t think. I think that’s a blatant lie.

CARLSON: It’s infuriating and deeply unsettling by our producer, Charlie Couger — when our leaders cared to put Americans first.