King Kong Got Free! What Trump Can Do About America's Immigration Disaster

So, the third question: if he can be trusted, can he actually do anything?

Now here, I want to offer a word of comfort to the Left.

People get very apocalyptic at the idea of Trump in the White House. But the fact is that the American presidency is inherantly a very weak office. It’s much less powerful than the Prime Minister in a parliamentary system like Britain or Canada, who by definition controls the legislature and certainly can count on his own party.

Trump’s own party will be utterly shell-shocked if he wins, and quite possibly hostile.

(Unless there is a landslide. And, as I said, I think that is possible). 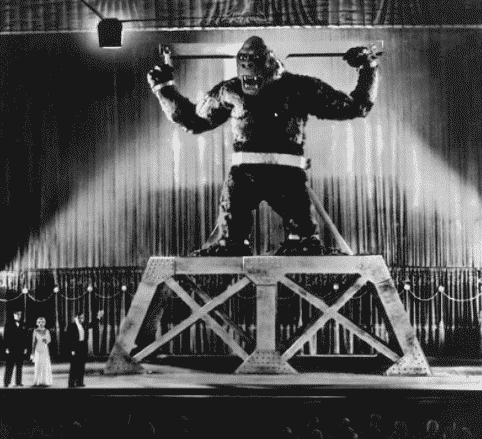 So Donald Trump could be like King Kong in the old movies: the curtain goes up, he’s on the stage, he’s got this metal frame that goes up to his waist to hold him down, and he’s roaring a lot—but he can’t move.

You can picture that, can’t you?—particularly the roaring?

But, you know, King Kong got free.

Even without Congress, there’s a lot that Trump could do. Famously, the presidency is a bully pulpit. Supposing Trump started showing up at the funerals of the victims of illegal aliens like Obama and his officials have to publicize the #BlackLivesMatter scam.

He could take a lot of (legitimate) executive actions. The Center for Immigration Studies has listed 79 different executive actionsthat would tighten up enforcement. And then you would get attrition through enforcement—what Romney called “self-deportation.” The illegal stock would slowly start to diminish.

At VDARE.com, we are very fond of what we call “strategic deportation.” That is to say, you arrest and deport extremely visible illegal aliens—and they are not “in the shadows”—and Send Them A Message. So next time there is a big illegal alien demonstration, round them up and ship them out. Send a message! [Applause].

And I think that would start an avalanche. You know, the last time there was an illegal alien crisis, President Eisenhower solved it in just a few months after he came into office with Operation Wetback. But he actually only deported a couple hundred thousand people. Over 1 million people just up and left. And that’s what would happen now.

And then there is legislation.

And I think that Reagan pointed the way for Trump on what to do. He focused on only a small number of things—Star Wars,tax cuts, defense build-up, that sort of thing.

So I would say that Trump should also focus on a small number of things. My favorite is: things that would reduce the political impact of immigration. And that would allow us to do more things in the future.

My favorite is abolishing birthright citizenship. It removes right away the incentive for people to immigrate illegally because their children won’t be citizens. And it removes the Democrats’ incentive to encourage illegal immigration.

The great prize, of course, is an immigration moratorium, a cut-off of all legal immigration.

But I would also be interested in an Official English amendmentbecause I think that it’s immensely popular and it sends a very important symbolic message.

There’s a report this week of some poor Milwaukee custard shop owner who’s been hassled because he ordered his staff to talk to his customers in English, and he was immediately threatened with federal legislation—he’s allegedly violated some federal labor code or something. And he had to back down.

Well, imagine if the federal labor code worked in the other way and said that you can’t insist on having people who speak Spanish, which is common now in large parts of the country, which in effect discriminates in favor of immigrants against native-born Americans.

That’s what the Quebecois did. They made it illegal for employers to specify that they wanted to hire bilingual people. And it worked for them. They got control of Quebec.