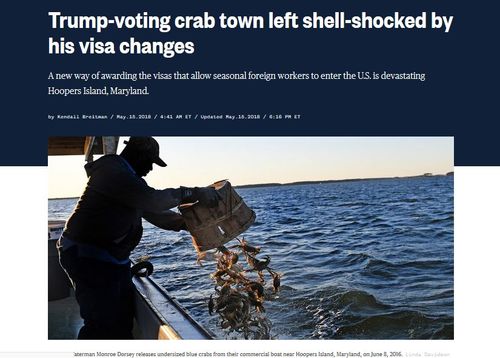 To be fair, usually the MSM will not make things up out of whole cloth, although they are not above that, (e.g. Charlottesville and any given black race riot) more commonly they will cram things and rearrange facts to fit into a narrative they want to push.

Here is a great example of this:

A new way of awarding the visas that allow seasonal foreign workers to enter the U.S. is devastating Hoopers Island, Maryland.

In this story the narrative is, "Trump's restrictive immigration policy hurts his own voters, haha isn't that funny?"

The story details a small town on the east coast that went handily for Trump yet now can't find enough Third World H-2B visa holders to fill its seasonal crab picking jobs because the amount of visas is not growing FAST enough.  The piece paints it as if there is some new drought of H-2B visas when in fact there is to be a 19% increase in the amount of H-2B visas this year due to the Republican's slimy, backstabbing and cucky omnibus bill which had nothing for immigration patriots and the Trump agenda and everything for the open-border lunatics.[Congressional Leadership Slips Increase in H-2B Visas into Funding Bill, by David North, CIS.org, March 22, 2018]

And yet the MSM still reports as if there has been some big reduction in the program.  It's rather astounding when you think it, and its why you can never appease them or their open-border agenda.  Even if you do (which the GOP has) they still write these fake stories with straight face.

When you hear people poo-poo the accusation of "fake news", remember this story.