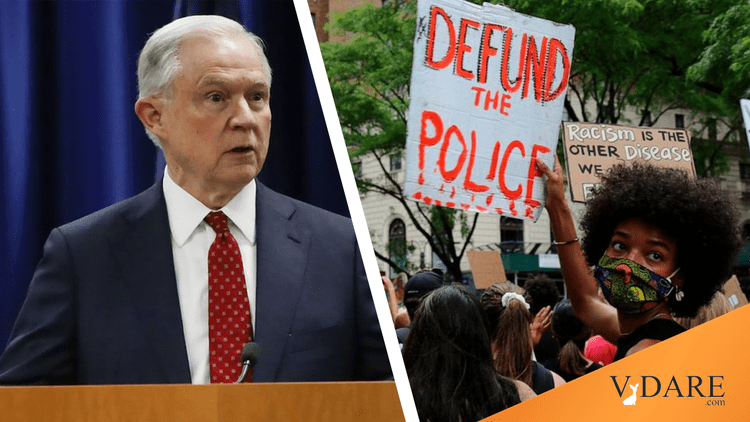 Former U.S. Attorney General Jeff Sessions, the embattled immigration patriot contender for Alabama’s GOP Senate nomination, has emerged as just about the only Republican defending law and order, no apologies. The message might carry him to victory in the Senate primary runoff on July 14—and it also would win re-election for Donald Trump, if he would adopt it and drop his childish vendetta against Sessions. But will Jared Kushner let him?

Cities are burning, rioters are murdering cops, Leftist vandals are tearing down priceless Confederate statues—and even memorials to abolitionists—and an Antifa terror squad controls six blocks in Seattle. The Congressional GOP’s answer: concede the Black Lives Matter claims “systemic racism,” then back “criminal justice reform” while trying to evade the Left’s drive to defund the police.

In contrast, the arsonists, looters, and rioters know that Democrat/ Main Stream Media Complex will cover for them no matter what they do:

Naturally, crackpots like Democrat Rep. Alexandria Ocasio-Cortez want defanged cops. “It is not crazy for black and brown communities to want what white people have already given themselves and that is funding your schools more than you fund criminalizing your own kids,” says the former barmaid known as Occasional-Cortex [Hill Democrats quash liberal push to ‘defund the police,’ by Sarah Ferris, Marianne Levine and Heather Caygle, Politico, June 8, 2020].

Needless to say, top Democrats know the idea is absolutely, incandescently absurd; 65 percent opposed it in a YouGov survey [What police reform does America support? by Linley Sanders, YouGov.com, June 1, 2020]. That’s why House Speaker Nancy Pelosi and Senate Minority Leader Chuck Schumer are telling Democrats to shut up and focus on “reform.” The Democrat presidential nominee, Joe “Sneakyfingers” Biden, as Ace of Spades calls him, also opposes the idea, which is as nutty as abolishing Immigration and Customs Enforcement and decriminalizing illegal immigration, two more daft ideas the ever voluble Occasional-Cortex likes.

The result of this rhetorical war on cops and the orders to stand down as rioters rampage: Irreplaceable memorials to Confederates and Christopher Columbus are gone. Cops have been murdered. “Protesters” even vandalized a statue of an abolitionist, proof positive that we’re witnessing an attack on white social order itself, not merely payback for armed robber Floyd.

For the past week, Black Lives Matter and Antifa-affiliated activists have engaged in a pitched battle with Seattle police officers and National Guard soldiers in the neighborhood, with the heaviest conflict occurring at the intersection of 11th and Pike, where law enforcement had constructed a barricade to defend the Seattle Police East Precinct building. Hoping to break through the barricade, protesters attacked officers with bricks, bottles, rocks, and improvised explosive devices, sending some officers to the hospital. At the same time, activists circulated videos of the conflict and accused the police of brutality, demanding that the city cease using teargas and other anti-riot techniques.

Then, in a stunning turn of events, the City of Seattle made the decision to abandon the East Precinct and surrender the neighborhood to the protesters. “This is an exercise in trust and de-escalation,” explained Chief Carmen Best. Officers and National Guardsmen emptied out the facility, boarded it up, and retreated. Immediately afterward, Black Lives Matter protesters, Antifa black shirts, and armed members of the hard-Left John Brown Gun Club seized control of the neighborhood, moved the barricades into a defensive position, and declared it the Capitol Hill Autonomous Zone—even putting up a cardboard sign at the barricades declaring “you are now leaving the USA.”

Seattle is “devolving into warlordism,” Rufo tweeted. “Rapper Raz Simone, who has been patrolling the barricades with an AK-47 and a handgun, has begun assaulting residents who disobey him. “We are the police now,” says his crew. “We are the leaders.” Disturbing video depicts Seattle’s new ruler—a black thug.

The #SeattleAutonomousZone is devolving into warlordism.

Rapper Raz Simone, who has been patrolling the barricades with an AK-47 and a handgun, has begun assaulting residents who disobey him.

"We are the police now," says his crew. "We are the leaders."pic.twitter.com/IJXYpyyYsy

Wisely, Trump jumped (or at last tweeted) on it. “Domestic Terrorists have taken over Seattle, run by Radical Left Democrats, of course,” he tweeted. “LAW & ORDER!”

He tweeted likewise on Monday: “LAW & ORDER, NOT DEFUND AND ABOLISH THE POLICE. The Radical Left Democrats have gone Crazy!”

Trump told reporters that defunding the police is “off the table,” and the campaign has already rolled out ads to force Biden’s hand. Other Republicans are demanding answers from their Democratic opponents [Trump and Republicans use calls to 'defund the police' to attack Democrats, by Lauren Gambino, The Guardian, June 8, 2020].

Democratic pollster Doug Schoen says the war on cops will end in a big GOP win in November [Defunding police will lead to Republican victory this year, The Hill, June 7, 2020].

That’s possible, but not if the GOP backs other anti-police policies and adopts the BLM narrative. Which is just what they’re doing, in the absence of strong leadership from Trump.

Ominously, Trump sent Jared Kushner and his chief of staff Mark Meadows to the working group [Inside the Senate GOP plan for police reform, by Jonathan Swan, Axios, June 9, 2020].

Also genuflecting to the BLM narrative, Senate Majority Leader Mitch McConnell says he will take orders from the token black Republican senator, Tim Scott: “We’re still wrestling with America’s original sin. … And I think the best way for Senate Republicans to go forward on this is to listen to one of our own” [McConnell taps Tim Scott to lead Senate’s police reform plan, by Andrew Desiderio, Politico, June 9, 2020].

On top of it all, Trump and the GOP continue celebrating Jared Kushner’s criminal justice  “reform” that released hundreds of violent felons. They even attack Joe Biden for supporting tough-on-crime measures back in 1994 that helped make America safe again.

In other words, Trump and Stupid-Party Brains Trusters are failing to exploit a major Democrat political miscalculation.

Which is why Jeff Sessions is so important. The immigration patriot’s  message is pure law and order [Jeff Sessions on Defunding Police: ‘Innocent People Will Die,’ by Robert Kraychik, Breitbart, June 9, 2020]. “You pull back police, you defund police,” he said, “then the criminal element increases. You’ll see death to good, innocent people” [Sessions: ‘I will not stop defending the police,’ by Henry Thornton, Yellowhammer News, June 10, 2020].

Arkansas Sen. Tom Cotton is the only other Republican who comes close, but even he is race-cucking. But recent developments are vindicating Sessions: Murders rose by more than 250 percent in Los Angeles during the last week. Chicago had its deadliest day in at least 30 years with 18 murders on May 31. May’s final weekend tally: 92 shot, 27 dead.

Sessions’ primary opponent Tommy Tuberville thinks “education and jobs” will stop the rioting, an unintentionally amusing opinion completely out of touch with reality that sounds a lot like the notorious nostrum known as “midnight basketball” [Tuberville: Nationwide unrest linked to ‘education and jobs,’ by Jeff Poor, Yellowhammer News, June 5, 2020].

No wonder Sessions is rising in the polls, despite Trump’s childish animosity toward him and endorsement of Tuberville.

The BLM-Antifa-Democrat Axis of Evil has handed Trump a slam-dunk issue. The Silent Majority is desperate for a leader who will go toe-to-toe with the thugs. They want more police, not fewer. No one wants to watch his city burn down, like Minneapolis, or see communists seize control, like Seattle.

The only one speaking for them is Trump’s former attorney general. It’s time for Trump to bury the hatchet, listen to Sessions, then hang this arson, vandalism, and murder where it belongs: on the party of Pelosi and Schumer.