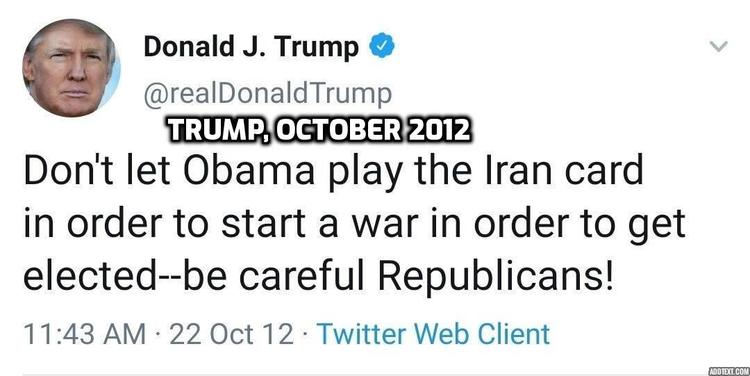 Trump Can’t Defend Our Border, So He Should Attack Iran! Wait—What?

It is the worst of times and the worst of times—at home and abroad. Unremitting waves of “migrants” a.k.a. illegal aliens continue to pummel America’s southern border, with no end in sight [Record number of undocumented immigrants flooded the southern border in May, by Julia Ainsley, NBC, June 5, 2019]. No truly sovereign nation would tolerate such an invasion, but the “sole superpower” permits it. At the same time, America is on the brink of yet another disastrous military conflict in the Middle East, this time with Iran. [Iran Threatens Nuclear Escalation as War Tensions Increase With U.S., by Paul Shinkman, U.S. News and World Report, June 17, 2019]. No American national interest is at stake. Rather than “America First,” the Trump Administration seems to be pursuing a policy of “America Irrelevant.”

The border situation is so outrageous it appears like something out of a black comedy. “We are in a full blown emergency,” said acting Customs and Border Protection Commissioner John Sanders, “and I cannot say this stronger: the system is broken”. [32% increase in migrants encountered or arrested at the southern border in May, by Priscilla Alvarez, CNN, June 5, 2019] Why is this happening? Migrants all over the world from Guatemala to Angola know the loopholes in immigration border enforcement imposed by a treasonous Leftist kritarchy, especially the claim of “credible fear” potentially qualifying people for asylum. [While everyone sleeps, the courts are abolishing all immigration enforcement, by Daniel Horowitz, Conservative Review, March 11, 2019] Thus, most migrants are not sneaking across the border: they are eagerly turning themselves in at ports of entry, knowing they will soon be released into the country on the promise, which they intend to break, that they will show up for adjudication.

These invaders are being dumped on local communities, seemingly randomly. Without notice, 350 Congolese were sent to San Antonio recently, leaving the city scrambling for interpreters. Mayors throughout Texas, even the Democrat mayor of Del Rio, are furious because dealing with invading migrants prevents local governments from spending money on streets, schools, and infrastructure. [Democrat border mayor goes ballistic over ‘dumping’ of illegal aliens in his town, by Daniel Horowitz, ConservativeReview, June 17, 2019] But the same MSM that wants social media regulated in the name of banning anti-vaccine propaganda is silent about diseases brought by these new arrivals.

The Department of Homeland Security is actually facilitating the invasion, dropping off illegals by bus in communities in the Southwest. [Five Years Later: Murrietta Residents That Blocked DHS Buses With Illegals Prepare For Round Two, by Beth Baumann, Townhall, May 21, 2019] Even alleged cartel members are claiming asylum right after their gunfights. [Sinaloa cartel shootout in Agua Prieta leaves nearly a dozen people dead, by Lupita Murillo, KVOA4, June 11, 2019]

Remember, President Trump has the authority to solve this problem without Congress. The Supreme Court has already ruled that the president can impose a travel ban on certain countries. Conservative Review’s Daniel Horowitz argues the president has inherent powers under Article II to exclude asylum applicants from entering the country, authority that has been reaffirmed by Congress and repeatedly sanctioned by the Supreme Court. [No judge has jurisdiction to erase our border, ConservativeReview, November 26, 2018] He also, as we have repeatedly outlined at VDARE.com, has inherent powers to build border defenses that would not require Congress.

But Trump won’t do it—partially because he has inexplicably surrounded himself with political foes who won’t back strong action. Instead, he’s blaming the Democrats for not undertaking the “simple” measure of closing the “loopholes.”

Yet he has to know (at least I hope he does) that Democrats, who have radically shifted left on immigration in recent years, won’t help. Besides, the Democrats’ plan to simply import a new electorate is working—for them.

The most optimistic explanation: Trump intends to use immigration as an election issue in 2020. Yet his fecklessness in office will be as unappealing to many voters as the Democrats’ extremism. [Trump Is Vulnerable to Biden on Immigration, by Michael Brendan Dougherty, National Review, June 11, 2019] After all, Trump began his campaign vowing to solve the immigration problem almost exactly four years ago—but essentially nothing has been done.

Instead, the president has been reduced to asking Mexico to solve our problem for us. He supposedly cut a deal with the Mexican government after threatening tariffs, but even that is in dispute. [Mexico denies Trump’s claim of secret concessions in deal, by Jill Colvin, Colleen Long, and Maria Verza, Associated Press, June 10, 2019] The president left powerful negotiating tools on the side, including, most importantly, a remittance tax. As in his dealings with Congress, the president insists on negotiating from weakness in his dealings with Mexico.

In contrast, in the Middle East the president has been extraordinarily bellicose. In April, the Administration revoked waivers that allowed certain countries to buy oil from Iran without violating U.S. sanctions [U.S. Won’t Renew Sanction Exemptions For Countries Buying Iran’s Oil, by Bill Chappell, NPR, April 22, 2019]. In early May, the president imposed new sanctions on Iranian metals, a direct threat to the regime’s economic viability. [Trump sanctions Iranian metals, Tehran’s largest non-petroleum-related sources of export revenue , by Amanda Macias, CNBC, May 8, 2019] Later that month, the president said a fight would mean “the official end of Iran” [Trump threatens Iran With ‘Official End’ by Kenneth Walsh, US News and World Report, May 20, 2019]. The “maximum pressure campaign,” as it has been called, puts Iran in the position of either accepting a humiliating surrender or striking out where it can [Maximum pressure on Iran Means Maximum Risk of War, by Ilan Goldenberg, Foreign Policy, June 14, 2019].

This has culminated in Iran’s alleged attack on two tankers traveling in the Strait of Hormuz. [Pompeo Says ‘There’s No Doubt’ Iran Attacked 2 Tankers, by Daniella Cheslow, NPR, June 16, 2019] Congressman Adam Schiff, one of the president’s most fervent opponents, agrees Iran is to blame [Schiff agrees with Trump: ‘No question’ Iran attacked oil tankers, by Ronn Blitzer, Fox News, June 16, 2019], Senator Tom Cotton (who has a relatively strong immigration policy) has gone so far as to call for direct military action. [Senator Tom Cotton Calls For ‘Retaliatory Military Strike,’ Against Iran After Tanker Attacks, by Benjamin Fearnow, Newsweek, June 16, 2019]

Why Iran would do this is questionable, unless it’s just a move of desperation.

But did Iran actually do it? Washington has a credibility gap with the rest of the world and its own people thanks to the disaster of the Iraq War.  There were, it turned out, no “Weapons of Mass Destruction.” So now many Americans openly question whether Iran attacked these tankers. This includes some MSM reporters who trusted the “intelligence community” when it was attacking Trump but now want an “international investigation of the incident”. [Ben Rhodes, CNN, And Others Purposefully Fuel Pro-Iranian “False Flag Conspiracy Theories After Tanker Attacks, RedState, June 14, 2019]

This is not the same country that re-elected George W. Bush in 2004. The trust in institutions is gone; America is war-weary.

And regardless of who did it, who cares? What American interest is at stake? The Iraq War made the region more unstable; an Iran War would unleash sectarian warfare all over again. [Attacking Iran Would Unleash Chaos on the Middle East, by Robert Gaines and Scott Horton, National Interest, June 15, 2019]

We can’t even say it’s “about the oil”—the United States is now the world’s biggest oil producer and may soon be the world’s top exporter [US will soon threaten to topple Saudi Arabia as the world’s top oil exporter: IEA by Tom DiChristopher, CNBC, March 11, 2019]. Who cares about Iran’s oil?

There is also a deeper fundamental question. Our country is crumbling. The border is non-existent; entire communities are being overrun. There’s something perverse about even entertaining a dangerous and costly military intervention halfway around the world. It’s akin to a Roman emperor declaring he will conquer India while barbarians are crossing the Rhine.

President Trump ran on a policy of non-intervention and promised it even after being elected. [Trump lays out non-interventionist U.S. military policy, by Steve Holland, Reuters, December 6, 2016] He repeatedly pushed back against efforts to get more deeply involved in Syria. He must now resist efforts to get involved in Iran, especially from those who may hint it will win him re-election.

Besides, President Trump needs to remember the real message of 2016—the war we need to fight is at home: to save the Historic American Nation.