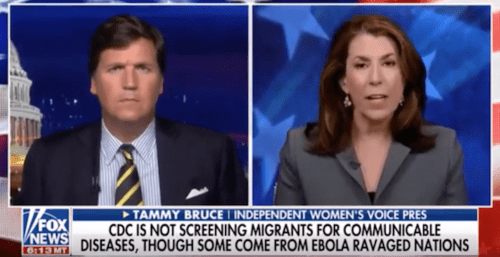 Tammy Bruce Warns of the Current Threat to Public Health

Tammy Bruce brought the disregarded issue of public health regarding the border crisis to the Tucker Carlson show on Wednesday, noting that aliens are not screened for contagious illness. 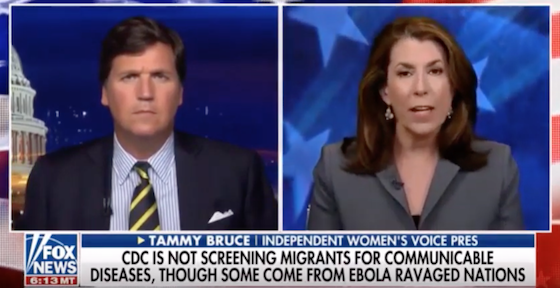 The current open border brings disease which endangers the people of the United States: some, like measles had been eradicated, and others, like Zika and Ebola, are entirely imported from abroad in recent years.

In one case, an eight-month pregnant Honduran “visiting” America gave birth to an anchor Zika baby whose lifetime healthcare cost to US taxpayers is estimated at $1-10 million.

Ebola is now having a flare-up in Africa just at a time when gaggles of Africans are crossing America’s open border along with the rest of the world. Five hundred Africans have arrived via that route since May 30. In 2014, a Liberian man with Ebola travelled here to receive first-world medicine despite the disease being extremely contagious. His nine days of care before death cost taxpayers $500,000.

So the public health threat from open borders is very real, getting worse and is not being widely discussed — although Tammy Bruce made a good case for more attention when she appeared with Tucker Carlson on Wednesday.

TUCKER CARLSON: While Republicans fuss about the details of Austrian economics and worry about tariffs, the U.S. border is getting closer and closer to total and utter collapse, and it’s not hyperbole.

Last May, the Border Patrol apprehended the highest number of illegal border crossers in 13 years. This is massive consequences for the country that we’re not talking about.

Tammy Bruce is thinking about them, though. She is a radio host and President of the Independent Women’s Voice and we’re happy to have her on tonight. Tammy, thanks very much for joining us.

CARLSON: So walk us through what you think some of the more obvious ramifications of this border collapse might be?

And then what happens in the aftermath when people are here in the country? The Kate Steinle situation, individuals who are being protected in sanctuary cities, criminal illegal aliens. But the fact of the matter is, this health crisis is an element that no one is really discussing.

The team at Independent Women’s Voice — as you noted, I’m President of — has realized and has determined that our own government, when we’ve been talking about of course, infectious diseases, like measles, we thought we eradicated it. We’re on track now to the end of this week at probably at about a thousand cases in 26 states.

Typhus is moving through Los Angeles. The CDC is now warning about tuberculosis. We have new outbreaks of Ebola. Certainly Zika — that’s in Congo — Zika, in Brazil, et cetera.

And what’s not being dealt with here is the fact that you’ve got 144,000 as an example, moving across this border, none of whom, of course, we know if they’ve been vaccinated. We hear the admonition appropriately about the importance of vaccinations. But what we’ve also determined, Tucker, is that the CDC only requires proof of vaccination for people applying for migrant visas legally.

If you are trying to enter using a non-migrant visa, the temporary visa to visit, you are not required to show proof of vaccination.

So it’s an interesting ball that’s been dropped at the Federal level, and then of course at the border. The chaos here is certainly — we’re worried about American families and their health — but the people almost at the front line who are extremely vulnerable are the migrants themselves.

The Border Patrol announced last week that they’ve captured a group of about 161 people from Africa, Congo, Angola, et cetera, and of course, Congo now is dealing with another outbreak of Ebola.

Imagine with these kinds of groups emerging. Individuals coming in from Brazil with Zika; families coming up from El Salvador — the mix of what these individuals are facing in the caravan and then when they’re placed in communal areas, or end up homeless in cities where the infrastructure is collapsed, because they are so many.

IWV has started a petition. This is this is our news for today. Something has to happen. We’ve launched a petition IWV.org telling the White House that we must redouble the effort for border security.

Beyond all the other political issues we’ve heard about on this issue, this transcends that. This is about every family and every human being caught up in this chaos. Thank you. It’s important. Thank you, sir.