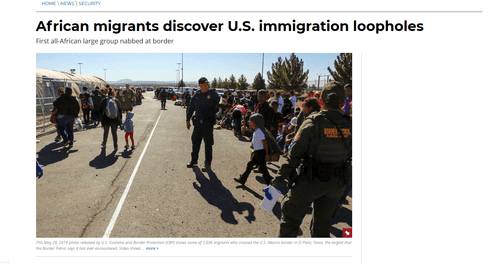 The Africans were caught Thursday night near the border crossing in Del Rio, Texas — though instead of presenting themselves at the port of entry, they jumped the border, an official told reporters.

Like Central American groups, this one was comprised of children and families, and appeared to be attempting to exploit the same loopholes the Central Americans discovered they could use to gain an illegal foothold in the U.S. and escape deportation.

“Bring a child, get released,” said a Customs and Border Protection official.

CBP said the group included people from Angola, Cameroon and Congo. Other African migrants have previously benefitted from the family loophole, but never in such a single large group. …

The Africans marked the 182nd large group to be encountered since Oct. 1. The others have generally been comprised of Central Americans.

Large groups are defined as those with 100 or more persons traveling together. Before this year such groups were almost unknown.

Border officials struggle to explain why they’ve become so prevalent, other than to blame the smuggling cartels that control the illicit transit of people through Mexico and across the border.

Earlier this week, agents encountered the largest group ever, comprised of 1,036 people.

Border-wide, 4,500 people are being caught every day, putting the country on track for another record month in May, Homeland Secretary Kevin McAleenan said on Thursday.

Will they be eligible for reparations?

They are eligible for affirmative action right now.

The relevance of Africans is that there are already a lot more where those came from, and soon there will many more than there are now.