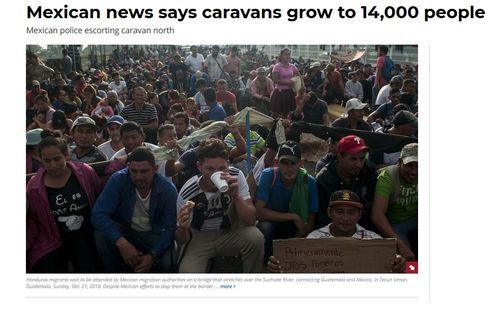 [See Also: Roll Over, Thucydides—“Failure Migration” Means The Weak Do What They Can, The Strong Suffer What They Must by James Kirkpatrick, July 5, 2018]

The invading army of "migrants" marching through Mexico (guarded by Mexican police) is now an estimated 14,000 strong. The United States of America, which has military bases around the world and spends more on defense than the rest of the world campaign, is meanwhile begging for help from Central American countries to control their own people.

Members of the illegal immigrant caravan chanted “si se pudo!” as they made their way north through Mexico Monday, having defied the will of one country and vowing to test the spine of another, the U.S., very soon.

The chant, which translates roughly as “Yes we could,” is a takeoff on the “Si se puede” — Yes we can! — cheer that immigrant-rights activists have used for years, and which the Obama campaign coopted in 2008.

Mexican police, who failed to stop them at that country’s border with Guatemala, now serve as escorts for the caravan as it barrels north, its members clear that they have no intention of staying in Mexico, and have eyes only for the U.S.

New estimates cited by El Universal, a Mexican newspaper, say the caravan now has 14,000 people, many of them already in Mexico while others still wait at the international border with Guatemala, in what has become a major humanitarian crisis.

Those massive numbers are proving to be a major test for the U.S. and Latin American governments, which all say they want the migrants to follow the laws and request entry to other countries through the usual channels.

President Trump is responding by abolishing or "massively reducing" foreign aid [Trump announces he'll begin cutting off foreign aid as caravan approaches U.S. by Kathryn Watson, CBS News, October 22, 2018]. Why these countries get any foreign aid at all to begin with has been left unanswered. For that matter, why we pay for a Defense Department when we have to rely on Mexico to secure our own border is also left unanswered.

Of course, these Central American countries get far more from remittances than they do from foreign aid. Yet bafflingly, infuriatingly, President Donald Trump somehow refuses to utter the words "remittance tax," which would allow him to fund the wall and keep his promise of having foreigners pay for it. The Republican Congress has clearly checked out before the midterm elections and neither lame duck Speaker Paul Ryan nor Mitch McConnell will utter the forbidden phrase.

Despite happy talk from conservative media, Democrats are still heavily favored to capture the House [Trump's approval rating is going up but voters still want Democrats to take Congress, by Emily Stewart, Vox, October 22, 2018]. This will essentially mean the end of the Trump Administration, as the White House will be bogged down in endless investigations. If there's going to be meaningful action on immigration, it needs to happen now.

Two words would transform the immigration debate; why won't President Trump say it? What, exactly, is he waiting for?