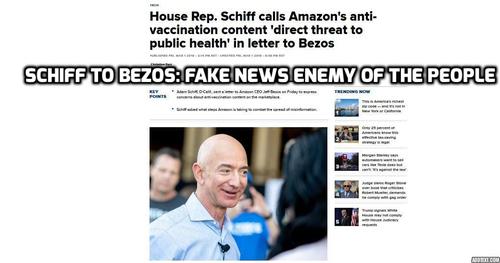 Watch out. Capitol Hill and Silicon Valley have locked their sights on the next targets of a frightening free speech-squelching purge: independent citizens who dare to raise questions online about the safety and efficacy of vaccines.

I'm vaccinated. My children are up to date. There's no dispute that vaccines have saved untold lives. But over the years, I've voiced my concerns about vaccine claims and government coercion in my newspaper columns and blog posts. These concerns include my objections to Gardasil mandates for schoolchildren in Texas and California; schools' threatening parents with jail time for refusing chickenpox shots for their kids; ineffectiveness of the flu vaccine; contamination issues at vaccine plants abroad; lack of data on vaccines' long-term and synergistic effects on children; and pharma-funded politicians' financial conflicts of interest.

In 2004, I recounted my family's firsthand experience with bully doctors who balked at even the mildest questioning of the wisdom of the newborn hepatitis B immunization. When my husband and I asked if we could simply delay this particular shot, as the vaccine is for a virus that is contracted mostly through intravenous drug use and sexual contact, my son's pediatrician angrily kicked us out of her practice.

Does this informed skepticism make me and other like-minded parents public health menaces, as the World Health Organization has proclaimed? Are we "sociopaths," as a journalist at The Atlantic once sneered? Apparently so.

At a Senate hearing on Tuesday, Washington state's public health secretary, John Wiesman, demanded that the feds launch a national campaign to counter "anti-vaccine" groups that are spreading what he condemned as "false information." Weisman called for increased funding from the Centers for Disease Control to combat opponents of the state's push to prevent parents from opting their children out of immunizations for personal or philosophical reasons. Health officials have blamed vaccine critics' social media influence for recent measles outbreaks. So Wiesman further urged Twitter, Facebook and Google to "use whatever mechanism they have available to stop promoting pseudoscience."

Let's be clear: Misinformation of all kinds abounds on the internet. The world's most influential "mainstream" media websites and celebrity social media accounts, for example, recklessly fanned the flames of the recent Covington Catholic High School and Jussie Smollett hate crime hoaxes. No one in Washington has called for the boycott of The Washington Post or TMZ over their false and misleading stories. But for some reason (hint: pharmaceutical big business), politicians and government bureaucrats are now hell-bent on deplatforming any and all dissenters who challenge mandatory vaccine regimens.

Is there junk science on the "anti-vaccine" side? Sure. But you can't address this issue without also addressing the problem with physicians and public health flacks who are unwilling to discuss the full risks of vaccines as well as their benefits; pro-vaccination groups that provide incorrect information about vaccines' duration of protection; physicians who refuse to care for children who are not "fully" vaccinated; and the comparative risk-benefit ratios of different vaccines.

As for efficacy, consider this new data: A recent whooping cough outbreak at the private Harvard-Westlake School in Los Angeles last week resulted in 30 students contracting the illness, all of whom were vaccinated. Of 18 unvaccinated students, none caught the disease. Will pointing this out on my Facebook and Twitter accounts bring down the Silicon Valley ban hammer?

Sen. Rand Paul, R-Ky., who happens to be a physician and parent himself, was the lone voice of dissent at the Senate hearing this week. While acknowledging that the benefits of vaccines generally outweigh their risks, he noted the plain truth that "it is wrong to say there are no risks to vaccines." He added that over $4 billion has been paid by the federal Vaccine Injury Compensation Program for adults and children who have been injured or died as a result of receiving federally recommended childhood vaccines.

Is it unacceptable fearmongering to raise that point? How about to share information on vaccine manufacturers' astonishing exemption from product liability? Or to point parents to new research findings on brain injuries caused by vaccines, which can be found at VaccinePapers.org? Or to link them to a recent statement by the Association of American Physicians and Surgeons, which "strongly opposes federal interference in medical decisions, including mandated vaccines."

When it comes to protecting our children, skepticism is always the best medicine. We need more free speech, not less. Those who seek to suppress debate and discussion in the name of the "public good" are the true health threats.