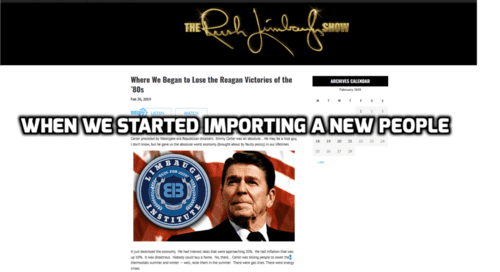 Rush Limbaugh has recently emerged as a strong voice for immigration patriotism. Rush lambasted the Gang of Eight amnesty in 2013, and he was an early supporter of Donald Trump’s immigration views in the 2016 campaign. [Rush Limbaugh: 'Trump Has Changed the Entire Debate on Immigration', by Jason Devaney, NewsMax, July 8, 2015]

Rush is even willing to discuss the danger of demographic change and how Democrats want to import a new people, something many conservatives are too afraid to touch. In his Wednesday broadcast, Limbaugh explained to his audience why Ronald Reagan’s apparent successes didn’t lead to a permanent GOP majority: Democrats brought in millions of new people. [Where We Began to Lose the Reagan Victories of the ’80s, Rush Limbaugh, February 20, 2019]

So why did we lose that?  Well, the importation of illegal immigrants, 60 million of ’em and counting.  One-fourth of the California population was not born in the United States. I think the role that Obama played in this — and the Republicans, too, there were some unwitting Republicans who thought that the importation of all these Latin-American immigrants, illegal or otherwise, would be great. Because, for some reason, as Catholics, they were supposed to be open to conservatism and family values and blah, blah.

The “illegal immigrants” part doesn’t make sense as most of these New Americans came here legally, but the gist of that statement is true. California is no longer the land of Ronny Reagan thanks to mass immigration, and conservatives are stupid to think Hispanics would vote for Republicans because of their faith.

Rush continued in his monologue to subtly note the Democrats’ anti-white agenda and explain how they awarded affirmative action to all non-whites.

So diversity was nothing more than affirmative action applied to people who had not been discriminated against for any reason by anybody, except the assumption that white America was discriminating against everybody because they were the beneficiaries, supposedly, of the founding of the country. You could have a wealthy, never born in the United States, never experienced an iota of racism person of color now become a member of this massive minority of victims, as redefined by Barack Obama.

This monologue would have never been uttered in the George W. Bush era. The Trump age has motivated many prominent conservative commentators to highlight issues they ignored in the past. Rush reaches millions of Americans everyday, and his message on the Democrats’ anti-white agenda is great news to immigration patriots.