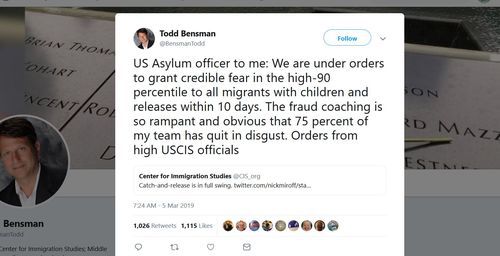 Thanks to reader Sonny G, information has come to me that everything I warned President Trump about has come true in the current battle at the border over fraudulent asylum claims from the Caravans of Death To America By Demographic Displacement. Just before the election, I warned President Trump that there were saboteurs in the immigration bureaucracy that would attempt to thwart his enforcement efforts. [President Trump Will Have Foes In Immigration Bureaucracy—But Also Friends. They Can Help Him Win, April 25, 2016] I specifically warned that Homeland Security Investigations (HSI), commonly known as ICE Special Victims Unit (ICE SVU) and U.S. Citizenship and Immigration Services (USCIS) would be at the center of resistance to immigration enforcement; ICE SVU because they wanted to be the Sex Police and USCIS because they considered illegal aliens their customer base.

My suggestion was to replace ICE SVU and USCIS management with U.S. Border Patrol (USBP) and U.S. Immigration and Customs Enforcement and Removal Operations (ICE ERO) managers to bring both agencies into the Trump enforcement attitude. Sadly, this was not done. Heroic efforts have been made by L. Francis Cissna, but recent news has confirmed the ongoing sabotage by USCIS middle management. [Trump Foes, Friends Fighting It Out At USCIS—Director Cissna Must Weigh In, May 25, 2018]

It appears though that Cissna is either out of the loop or being lied to by the Deep State saboteurs. Recent tweets by Todd Benson of the Center For Immigration Studies (CIS) have documented that Asylum Officers and Refugee Officers are under orders to approve all of the Caravanners initial claims of credible fear. A credible fear claim, the first step in the Expedited Removal process, is where an immigration officer, usually a Customs and Border Protection Officer (CBPO) or Border Patrol Agent (BPA) encounters an alien at a Port-of-Entry or arrested within the United States, where that immigration officer determines that the alien is removable, but the alien claims they have a fear of returning from where they came.

n this process, the claim is supposed to be valid and licit, e.g. credible to a trained immigration officer. Sadly, the Trump Administration continues the Clinton, Bush, Obama policy of referring all claims of fear, credible or not, to Asylum Officers of USCIS for a credible fear interview. The Asylum Officers are supposed to interview the alien in question and determine, for a second time, if the claim is credible. My intelligence sources and learned observations led me to believe that the Trump Administration was exercising its authority over USCIS and the word was out that the credible fear process was being fixed. [Trump Administration Adopting The Federale Solution?, July 2, 2018] If that was ever true, it is apparently no longer—the Deep State Resistance has wrestled back the control of the Asylum Officers and begun an active campaign of deliberate and illegal sabotage.

From Benson’s Twitter feed documenting the corruption of the credible fear process:

Asylum officer to me: the vast majority of Central Americans this Texas office sees are illiterate with no or very low education. Large numbers are indigenous Indians who don’t even speak Spanish. No interpreters. Many get let out with no interview and credible fear box checked.

US asylum officer to me: Migrants with kids first tell border patrol they're coming for work, a deportable claim, then pro-migrant group lawyers give them fake stories of government persecution to get "credible fear" box checked. In Dilly, Texas, 98 percent abscond after release.

The above clearly shows that Asylum Officers have identified a fraud trend, a pattern of identical stories that on their face are not credible, changed statements, and outright fraud perpetrated on the government by Treason Bar lawyers organizing false statements.  And this is not new: canned and identical stories of persecution are a long-time pattern in asylum claims.

A Chinese woman walked into a law office in New York’s Chinatown and asked to see her lawyer. She had applied for asylum, claiming that she had been forced to get an abortion in China to comply with the country’s family-planning laws, and she was anxious about her coming interview with immigration officials.

She had good reason to be worried: Her claim, invented by her lawyer’s associates, was false.

But the lawyer, John Wang, told her to relax. The process, he said, was straightforward, and as long as she memorized a few details, everything would be fine. “You are making yourself nervous,” he said in Mandarin. “All you would be asked is the same few rubbish questions.”

“Just make it up,” the lawyer added.

And it gets worse, USCIS managers are in on the fraud.

US Asylum officer to me: We are under orders to grant credible fear in the high-90 percentile to all migrants with children and releases within 10 days. The fraud coaching is so rampant and obvious that 75 percent of my team has quit in disgust. Orders from high USCIS officials https://t.co/X7tIG3xM3y

This is deliberate and criminal sabotage by USCIS managers, managers like terrorist supporter Irene Martin, who acted to protect the San Bernardino Muslim terrorists. [Treason and Sabotage: Immigration Bureaucrats Acted To Protect San Bernardino Terrorists, July 5, 2016] Sadly, two years into the Trump Administration, saboteurs like Martin remain in USCIS middle and upper management, raging out of control, flooding the country with illegal aliens who are given a credible fear determination without even asking them any questions. I also advised President Trump on how to gain control over a rogue agency. [Taming U.S. Citizenship And Immigration Services, Federale Blog, December 17, 2016 (Since censored by Google, but available on the Wayback Machine.)]

The real question is what is going on and who is behind it. We know it is middle and upper management in USCIS, filled with Irene Martins. But whither Cissna? Your correspondent does not know. However I do know that his superior, Kirstjen Nielsen, Lady DACA, is a likely suspect.

Shortly after President Donald Trump returned last March from a visit to the San Diego border, Homeland Security Secretary Kirstjen Nielsen found herself in a familiar place — saying no to her boss.

Trump, who had just surveyed border wall prototypes, wanted to expedite the bidding process and even negotiate some of the contracts himself. Why, he demanded to know in an Oval Office meeting with Nielsen and other officials, couldn’t they make that happen, according to three people briefed on the conversation. “He would get frustrated by the bureaucracy,” including the federal procurement process and land acquisition issues, recalled a former DHS official.

Now, there was no reason that wall building could not have been expedited. Emergency and other expedited contracting occurs all the time in the Federal government and contracting rules all have exceptions. Exceptions that could save the government billions of dollars.

She apparently routinely lies to the President:

Nielsen had been here before. Early in her tenure, Trump would regularly dial her cellphone in anger when DHS published monthly border apprehension numbers showing an uptick, often asking her why the government couldn’t detain undocumented minors indefinitely. Because that, Nielsen would calmly explain, would be illegal.

That is just not true, the authority to hold aliens has been endorsed by the Supreme Court in Flores v. Meese, where the Supreme Court said illegal aliens, including minors, could be held until a final decision was made on deportation, and clear letter law in statute. [Grievance Driven Asian Judge Makes Up Her Own Law, Declares Illegals Should Be Freed, September 15, 2015]

And to top it all off, she is apparently uninterested in immigration, but obsessed with cyber security, something more rightly handled by the National Security Agency.

“Her bread-and-butter issue is cybersecurity and there’s a lot that remains to be done in terms of making sure the country is equipped to deal with that threat, so you can expect her to start talking about that more,” said the person close to Nielsen, adding that “she’s in this until she can feel like she’s accomplished what she wants.”

So, either Lady DACA is deliberately sabotaging Trump immigration policy, or she is neglecting the bureaucracy and allowing Deep State activists to run rampant. Either way, President Trump needs to fire Lady DACA and order Cissna to take control of his agency. Better yet, replace all USCIS managers with Border Patrol managers. Personnel is policy!