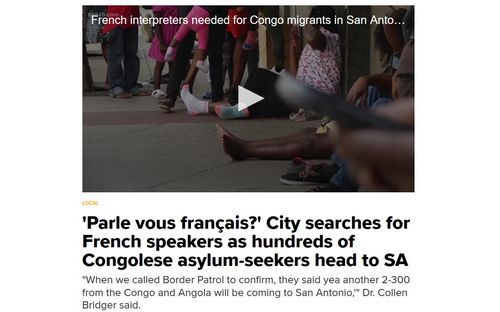 From channel KENS 5 in San Antonio:

“When we called Border Patrol to confirm, they said yea another 2-300 from the Congo and Angola will be coming to San Antonio,'” Dr. Collen Bridger said.

Roughly 350 migrants from the Congo are expected to arrive in San Antonio in the coming days leaving the city scrambling for French-speaking volunteers.

Bridger said the Congolese migrants began to arrive in town on Tuesday. They told Migrant Resource Center workers, they traveled with a group of about 350 migrants through Ecuador to the southern border.

“When we called Border Patrol to confirm, they said, ‘yea another 200 to 300 from the Congo and Angola will be coming to San Antonio,'” Bridger said.

They may not have figured out yet the Angolans are likely to speak Portuguese. Eventually, they may be flying in specialists in native African languages.

On Wednesday alone the migrant center saw a total of 450 people, Spanish and French speaking, during the day and housed 375 of them at Travis Park Church at night.

The city opened up the Frank Garrett Center to house the Congolese migrants for the weekend, but after that, they’re not sure where they’ll house them especially since they don’t know how long some of them will be here.

“The plan was 350 of them would travel from San Antonio to Portland. When we reached out to Portland Maine they said, ‘Please don’t send us any more. We’re already stretched way beyond our capacity,” Bridger said.

“So we’re working with them [the migrants] now to identify other cities throughout the United States where they can go and begin their asylum seeking process.”

Higgs said they’re spending thousands of dollars a week on bus tickets for many of these migrants Spanish and French-speaking to make it to their final destination.