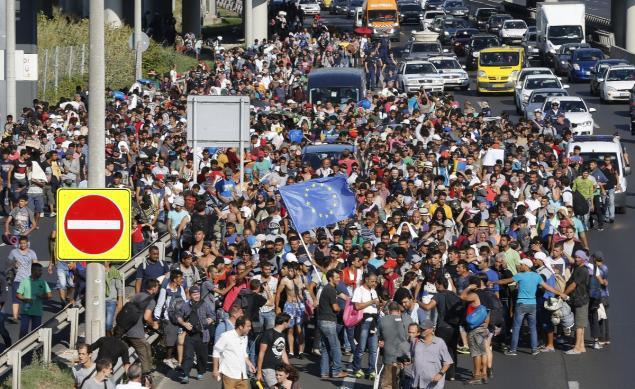 Memo To My Fellow Jews: Immigration Restriction Is NOT Nazism 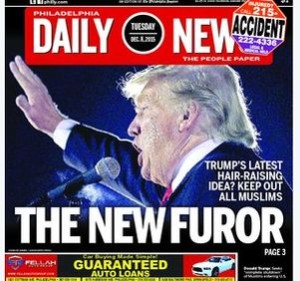 Donald Trump has released his first campaign ad repeating his call for halting immigration by illegals and Muslims, and sure enough, he’s being called xenophobic and racist [Donald Trump’s new TV ad: Make America great by keeping the darkies out, by Greg Sargent, Washington Post, January 4, 2016]. Of course, ever since Trump first called for a Muslim moratorium, he’s been openly compared to fascists and Nazis. Memo to my fellow Jews (among many others): immigration restriction is NOT Nazism.

This same political class is trying to compare any limits on the influx of Syrian and Islamic refugees to the supposedly shameful episode where Americans turned away Jewish refugees from Nazi Germany. Thus the Holocaust Museum, while not allowed to opine on public policy, opined “Nobody can reasonably argue that the response from the international community has been enough. As an institution we have a mandate to be the voice that the Jews of the 1930s did not have” [Holocaust Museum Sees a U.S. Duty to Syrian Refugees, by Josh Rogin, Bloomberg View, November 17, 2015]

Literally dozens more articles have appeared with headlines like:

A question: if our immigration policy must be determined by nightmares about Jews being forcibly sent to Nazi Germany, why do journalists want refugees to come a country where Hitler Reincarnated may be the next President?

A small number of conservatives are pushing back against the Trump=Hitler, Syrian Refugees=Jews in Nazi Germany meme. But most do still accept that the US was in the wrong for not accepting Jewish refugees in the 1930s. For example, Jonathan S. Tobin noted in Commentary that “the refusal of the United States to take more than a token number of those Jews fleeing was a death sentence for those stuck in the Nazi empire of death” [Why Syria is not the Holocaust, November 20, 2015]. Breitbart contrasted the security concerns over Muslim immigrants to the supposedly racist concerns of Americans in the past: “One of the main reasons immigration laws restricted Jewish entry into the U.S. was to promote the racial, i.e. genetic, superiority of the national ‘stock.’ (Such eugenicist ideas were widespread, far beyond Nazi Germany.)” [Why Syrian Refugees are not like Jewish Refugees in WWII, by Joel Pollack, November 17, 2015]

But this assumption of American guilt about the death of Jews is simply a collection of tropes, easily disproved. Let’s examine them in turn.

Even accepting for the purposes of argument that Nordicism, anti-Semitism, and/or eugenics influenced the 1924 Act, it had no racial or ethnic test. Rather it set “nation of origin” quotas. Under the quota system, Germany had the highest allotment of quotas. Between 1933 and 1939, 95,000 German and Austrian Jews immigrated to the United States, making them proportionally more likely to immigrate than any other ethnic group.

Even a Washington Post story that tried to shame America into accepting Syrian refugees acknowledged “To be sure, the United States was emerging from the Great Depression, hardly a climate in which ordinary folks would welcome immigrants and economic competition.” [What Americans thought of Jewish refugees on the eve of World War II, by Ishaan Tharoor, November 17, 2015]

Furthermore, after Kristallnacht in 1938 support for accepting a limited number of refugees increased.

Americans were sympathetic to the Jewish persecution, but they were not willing to undermine their immigration policies when Americans were suffering.

To the contrary, the Encyclopedia of the Holocaust discusses the efforts of the Joint Distribution Committee, the major Jewish organization that sought to resettle German and Austrian Jews, and reports:

JDC tried actively to find safe havens for refugees in Latin America. In 1938, in response to an offer to accept 100,000 Jewish refugees in his country, the JDC founded the Dominican Republic Settlement Association, which brought several hundred refugees to the experimental farm of Sosua. . . In 1939, when 907 passengers on the ship St. Louis were denied permission to land in Cuba despite the JDC's efforts, the JDC arranged for the passengers to be accepted to England, Holland, Belgium, and France so they would not be returned to Germany. [page 368]

In 1933, there were 716,000 Jews in Germany and Austria. The vast majority of them fled, as the US Holocaust Museum notes that “by October 1941, when Jewish emigration was officially forbidden, the number . . .had declined to 163,000 from 716,000 in 1933,” the majority of whom were elderly. In other words, almost the Jews who wanted to leave Germany, left. Hundreds of thousands ended up in the United States, Palestine, the United Kingdom, however, many ended up fleeing to neighboring countries of France, Belgium, the Netherlands, Denmark, Czechoslovakia, and Switzerland. With the exclusion of Switzerland, all these countries ended up under Nazi control.

By most accounts, the Nazis conceived of the “Final Solution” at the Wannsee Conference in 1942. In 1941, Nazi Germany banned Jewish emigration, so the issue of accepting German refugees became moot.

Thus, in order to attribute blame to Americans over the Holocaust, Americans must be credited with clairvoyance in the 1930s—to foresee that Germany would both take over much of Europe and then begin systematic killings of Jews.

But if we are to go by what economists call revealed preferences, even the majority of European Jews did not have this fear. As noted above, the JDC arranged for Jews, including those on the now infamous M.S. St. Louis, which ultimately returned to Europe, to settle in the Dominican Republic. Yet the Jews chose to return to other European countries, which weren’t Nazi-occupied at the time.

By the time the time Hitler began his Final Solution, almost all of Europe was engulfed in total war. The fate of millions of European Jews during the war was tragic, but a total of fifty million people died in that war, many of them civilians. U.S. immigration policy cannot begin to solve the world’s humanitarian problems.

VDARE,com Editor Peter Brimelow famously began his 1995 book Alien Nation: Common Sense About America’s Immigration Disaster by calling American immigration policy Hitler’s posthumous revenge—because it led the American elite, ”passionately concerned to cleanse itself from all taints of racism or xenophobia,” to go overboard on the other side. In other words, our Ruling Class began to see Hitler in any attempt to protect America’s ethnic integrity. Hence the current attacks on Donald Trump.

In the same way, refugee policy has become part of Hitler’s Revenge. Every group suddenly becomes oppressed Jews, and denying them entry equivalent to the Holocaust.

This misconception is just as dangerous as any amount of indifference. It is a libel and we must fight it.

After all, if mass immigration continues without limits, it will be Americans themselves who will be needing asylum.