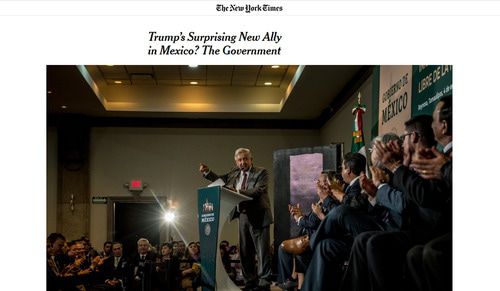 AMLO has gone out of his way not to speak ill of President Trump.  He isn’t squawking about the border wall or Trump’s declaration of a National Emergency.  He has surprised the New York Times by co-operating with the Trump Administration in various ways, for example by holding some Central American asylum seekers in Mexico. [Trump’s Surprising New Ally in Mexico? The Government, by Azam Ahmed and Kirk Semple, NYT,  March 1, 2019]

But, like any Mexican president, AMLO defends Mexicans in the U.S—often in ominous ways. At his recent press conference, he spoke at length about his government’s plan to aid Mexicans here:

We are going to discuss the topic of the support [of] fellow countrymen migrants, those who, for necessity, [live] in the United States. They work and they are exemplary Mexican citizens because, with much effort, and confronting bad treatment, they have gotten ahead…They also send $30 billion a year to their relatives in Mexico…It is a fundamental support for the economy.

Contrary to popular belief, remittances are not Mexico’s largest source of income. They are less than 3 percent of Mexico’s GDP . Automotive exports earn more. But that doesn’t mean Mexico won’t fight to keep them coming.

Foreign Minister Ebrard then provided some statistics about Mexicans living outside of Mexico:

97.2 percent live in the United States. We have the biggest concentration in California, Texas and Arizona: 4 million in California, 2 million in Texas and half a million in Arizona. In cities…Los Angeles half a million, Chicago 229,000, Houston 257,000. We are speaking of 11.3 million persons who were born in Mexico…8 percent of these persons have visas, 27 percent are already permanent residents, 17 percent have dual citizenship and 48 percent lack documents...they are more vulnerable. They are the ones we have to support more. [Links added.]

Get that? Illegal aliens “are the ones we have to support more.”

“The community in the United States,” Ebrard said, has complained that the Mexican government is too “defensive” in helping those expatriates:

They tell us there are insufficient visits to prisons, to detention centers. Let’s remember that there are detentions of Mexicans who have lived for years in the U.S. They tell us there is a lack of orientation and legal representation, that there is scant coverage of the mobile documentation services and consular protection in out-of-the-way places.

Of course, immigration patriots think Mexico meddles where it shouldn’t and promotes illegal immigration, but Mexicans—here and there—don’t see it that way, despite Mexico’s 50 consulates in the U.S., the largest such network in the world. And those diplomatic stations dispatch “mobile consulates” to what we Americans might call “underserved” areas.

But even those, Ebrard says, are “insufficient.” So “we are going to a new vision, centered in the rights of the migrants” because as AMLO himself “told us, ‘We have to be more effective defenders of the migrants in the United States.’”

Ebrard laid out a 10-point plan which would  bring efforts for illegal aliens, a.k.a. the “community,” to heretofore unknown heights.

Of course, legal  training will be needed to help consular staff help the undermining:

Like we don’t have enough problems with Mexican meddling in our courts.

Then comes the inevitable defense of “Mexican culture,” which is code for promoting bilingualism and undermining English, and perhaps, encouraging reconquista revanchist dreams:

Which sounds like a plan to impose Mexican cultural hegemony wherever a Mexican hangs his sombrero.  Mexican immigration will establish Spanish-speaking enclaves in the U.S., inevitably followed by demands for institutional bilingualism.

Of course, any county’s consulate would defend its culture. But such a defense takes on a different tone and tenor when it’s related to millions of that country’s citizens living here illegally.

You’d think Mexico would have its hands full with schools in Mexico. But that small issue aside, Ebrard’s ambitious plan says more remittances are required to pay for development in Mexico:

We need to empower the Mexican and Mexican-American community through the recognition of their contributions which are very significant.

So AMLO’s government will annually recognize outstanding Mexicans who reside outside of Mexico. Almost all of them, again, live here in the U.S..

“We have to modernize the norms and practices” of the foreign ministry, Point IX says, “to underline the inclusion of the indigenous languages, and for example, [same-sex] marriage and other rights in all consular procedures.”

Point X calls for periodic consultations to build a new “relationship with the Mexican Diaspora, beginning by changing the defensive mentality, to a proactive mentality.”

So Mexican meddling in U.S. politics would  continue indefinitely—even if AMLO hasn’t started a war of words with Trump over a border wall, or illegal aliens, traveling in “migrant caravans, crashing the U.S. border.

Question: will Trump do something—such as stopping these ridiculous and unnecessary “mobile consulates”—or merely let it go, as he (and all previous U.S. Administrations) have done so far.

As Ann Coulter has had to say too many times lately, the signs are not encouraging.