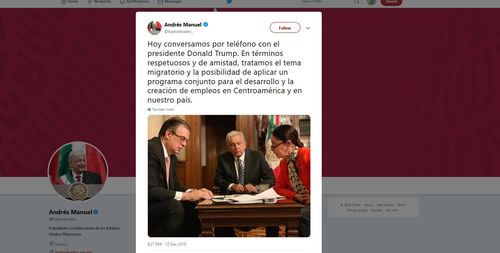 Mexico's President AMLO Talks To Trump By Telephone And Continues To Speak Well Of Trump, Even When Questioned By Reporters

Regarding the conversation with Trump, AMLO tweeted that

Today we spoke by telephone with President Donald Trump.  In respectful and friendly terms, we discussed the subject of migration and the possiblity of applying a joint program for the development and creation of jobs in Central America and in our country.

The next day (the 13th),  at AMLO's morning press conference, four reporters asked him about Trump, and appeared to be needling him to criticize the Donald.  But AMLO didn't bite.

First, a reporter asked about the telephone conversation with Trump, and also brought up the Trump tweet about Mexico "paying for the wall" via trade, and asked "what accords have been arrived at and is there is really an accord of friendship or are we going to continue seeing these morning tweets of Donald Trump?"

It was a a very good conversation, friendly and respectful.  We spoke of the subject of migration and the possibility of an investment agreement to support productive projects, to create jobs in the countries of Central America and in our country, with the idea that the people will not have the need to migrate, that migration will be an option, not obligatory.  I mentioned to him that we are committed to this plan and it is part of the [Mexican] budget which will be delivered this Saturday....
Conferencia de prensa del Presidente Andrés Manuel López Obrador 13 de diciembre de 2018
["Press Conference of President Andres Manuel Lopez Obrador, December 13th, 2018"]
Presidential Website, December 13th, 2018

The next reporter asked if AMLO would visit Washington, and he replied that Trump had invited him.  AMLO spoke more about his aid proposal

…I maintain that a joint investment agreement with the United States, that would include the businesses of both countries, and the governments, to support development in Central America and our country, I consider that it is more important or as important as the free trade agreement...it is to deal with the causes of the migratory phenomenon....If there is investment in Central America and in our country, there will be development, there will be jobs and in this way we will deal with the migratory phenomenon.  It is the most humane and most effective way to confront the problem.

The next reporter asked if AMLO had told Trump that he is against the wall.   AMLO replied

We have not mentioned  the topic in any conversation.  We have not discussed it. Therefore, I maintained yesterday on Facebook and Twitter that it was a respectful and friendly discussion.

A later reporter brought up Trump's tweets, to which AMLO responded

I have no more commentary than what I have already said. The relationship with Trump is one of respect and friendship, and I am going to work to keep it that way.

So far, as President, AMLO has gone out of his way not to criticize Trump.