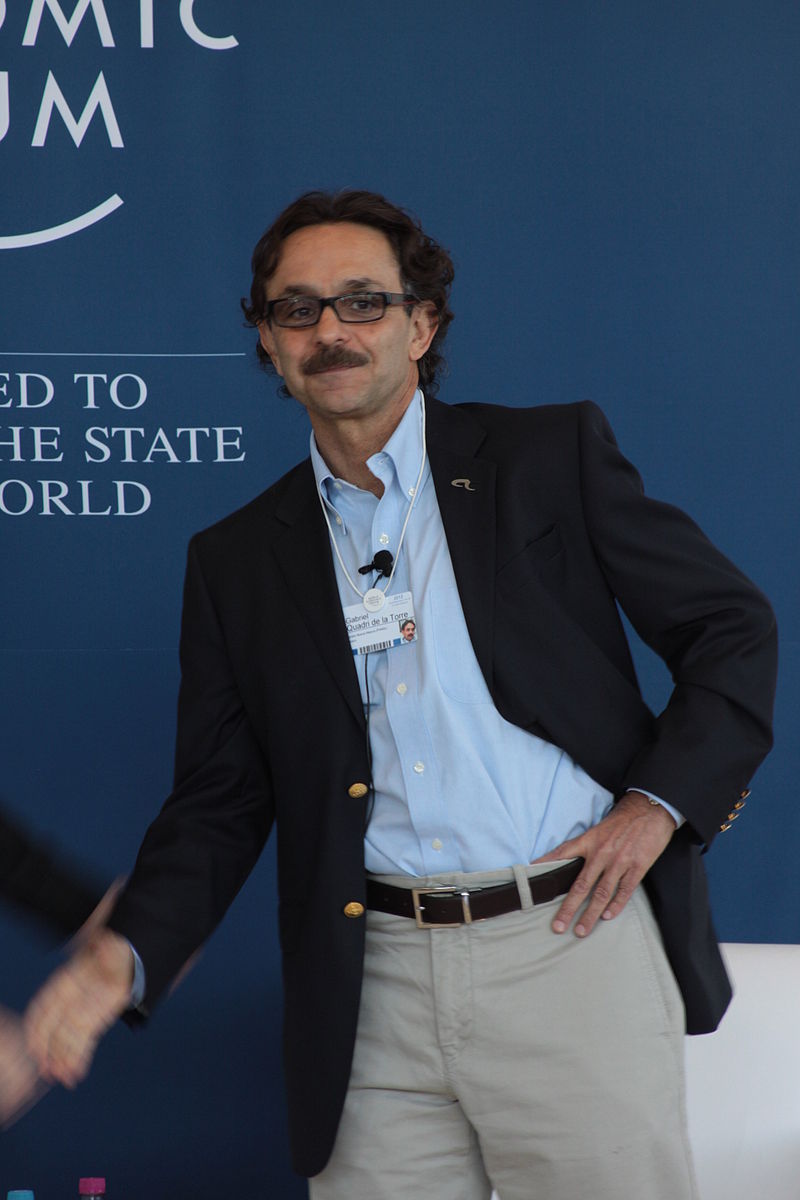 Gabriel Quadri (right) is a white Mexican politician who ran for the Mexican presidency in 2012 under the banner of the small PANAL party. By training, Quadri is a civil engineer and economist. By Mexican standards, we might say he’s a sort of socially liberal free marketeer.

If Mexico did not have to carry Guerrero, Oaxaca and Chiapas, it would be a country of medium development and an emerging power… [My translations throughout]

The three states Quadri is referring to are the southern states of Guerrero, Oaxaca and Chiapas. 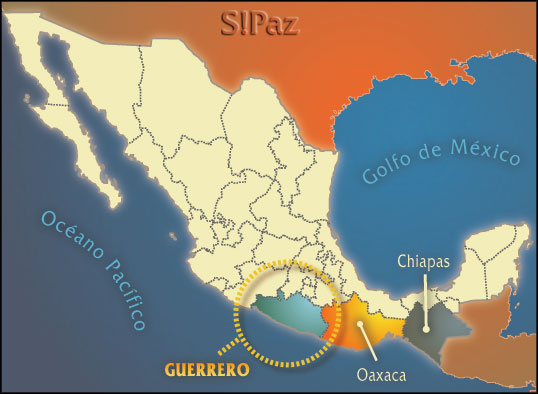 What makes this a racial issue is that these three states have large indigenous (=Indian) populations.

According to a Quadri-bashing article in the ironically named Libertad Bajo Palabra [“Liberty under the Word”]:

social media users have begun a campaign to demand that the Universidad Iberoamericana fire Quadri….[Quadri] is one of the professors in that school. For their part, the indigenous peoples of the entities in Question have united and have demanded that Quadri go to the southeast to apologize….

The Libertad Bajo Palabra article cited above reported that Yeidckol Polevnsky, President and General Secretary of President AMLO’s MORENA party, responded to Quadri’s tweet: “This country would be much richer without brainless people like him, ambitious, vulgar and corrupt.”

Here is some more Quadri-bashing from Quadri’s own twitter feed:

You have no idea of the human, cultural and natural potential of Oaxaca, Guerrero and Chiapas… Alfredo Harp Helu,12 Jan 2019

But Quadri did not back down. To Harp Helu he responded that

“…nobody doubts the cultural and natural wealth of Oaxaca, Guerrero and Chiapas. But the institutional and political context that explains the poverty and backwardness should be seriously discussed. Beyond taboos and useless political correctness.”

The governor of Oaxaca, Alejandro Murat Hinojosa, son of a previous governor Jose Murat Casab, tweeted on January 11th that “The commentary on Oaxaca is unacceptable and offensive. I demand of him a public apology to all the Oaxacan people.”

To which Quadri responded (January 12th)

Pardon me, but the apology should be given by bad governments and those responsible for the unproductive institutions that have made Guerrero, Oaxaca and Chiapas the poorest and most backward states of Mexico…

But not everybody disagreed with Quadri. In an article in Excelsior about the kerfuffle,  commenter Gabriel Valles, from (much more European) northern Mexico—took it much further:

I don’t care for Quadri and would never vote for him, but in this he said the truth. Why apologize? It’s the truth. In the South they are bunch of lazy mantenidos [“maintained” people, i.e freeloaders] they just reach out the hand and live off what we produce in the north….

We complain about the racism of the Trumpsters [trump-otes]and we are the worst racists among ourselves and that’s why we don’t advance.

The fallout over Quadri is an example of this well-kept Mexican secret bubbling to the surface.

But is what Quadri said true? How poor are these three states anyway?

Mexico is divided into 32 entities: the 31 states and the capital Mexico City.

According to the Human Development Index (HDI) of the United Nations, Guerrero, Oaxaca and Chiapas have the lowest HDI ratings of all Mexico.

In the map below, the three states have their own color. 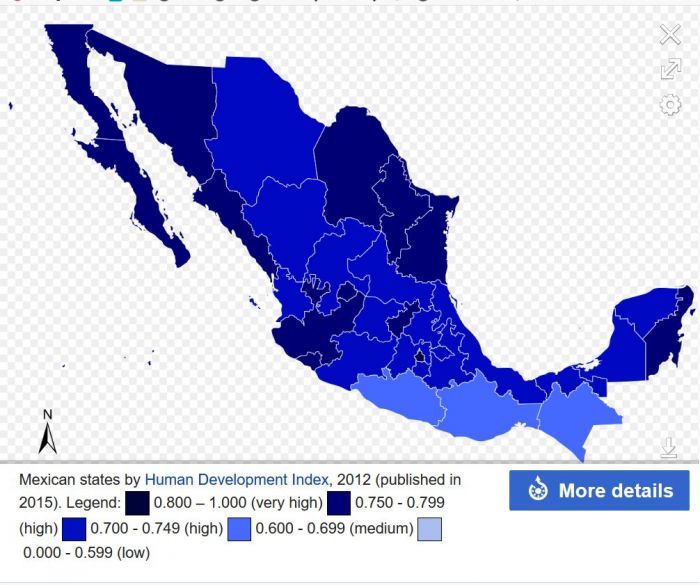 An article in Mexico’s El Economista reports that the majority of the workers of Chiapas, Guerrero and Oaxaca receive an insufficient salary to buy the canasta alimentaria (a market basket or commodity bundle):

In these states are also found the country’s lowest incomes, the highest level of workers working in the informal economy and the highest levels of the population with incomes of extreme poverty.

The three poorest states, Guerrero, Oaxaca, Chiapas (herein referred to as the South-3) are in a league of their own when it comes to sheer misery. A staggering 70.2% of their populations were poor in 2014, a scandalous number for an OECD economy. The rate of extreme poverty is also three times higher than the national average (28.7% versus 9.5%); 3 out of 10 of Mexico’s total number of extreme poor live in these states. As mentioned above, one of the factors that appears to drive poverty in this state is its large indigenous population…. According to the latest census, these three states (especially Oaxaca and Chiapas) have some of the highest proportions of indigenous language speakers in the country.

On the Margins: Why Mexico’s Southern States Have Fallen Behind, by Rodrigo Aguilera, August 10, 2015 updated December 6, 2017

But why aren’t the three Mexican states of the Yucatan peninsula, with about the same proportions of Indians, more prosperous?

Aguilera writes: “Linguistically homogenous countries tend to do better so this could better explain the difference in socio-economic outcomes”.

There is a lot to consider here. But it’s interesting that Quadri unleashed such a firestorm just by pointing out how poor and backward these three states are—despite that fact that it is common knowledge. The racial issue, although unspoken by many, lies beneath the surface, comments like Quadri’s bring it up.

Gabriel Quadri, by the way, is no Trump fan. He even has an interesting conspiracy theory regarding Trump and the caravans:

Somebody is organizing the migrant caravans that leave Honduras for Trump. It is what he needs to keep up the pressure to finance his absurd border wall. Twitter, January 15

Those who organize, promote and tolerate the Central American migrant caravans are accomplices of Trump. Twitter, January 17

In other words, Quadri is against Trump and the caravans, and thinks the caravans are part of a Trump conspiracy!

An undocumented immigrant who lives in Texas and who used stolen ID to illegally vote was sentenced to jail time before confronting deportation.

Wow. La Opinión openly tells readers in the first paragraph that this guy…

The Mexican immigrant, Enrique Salazar Ortiz, of Elmendorf, near San Antonio, faces a harsh sentence of three years in a federal prison.

Salazar Ortiz was found guilty of making a false declaration in applying for a passport, illegal voting as an undocumented immigrant and aggravated identity theft, according to the San Antonio Express-News.

The accused used the name Jesse H. Vargas Jr. in voting in the 2016 elections, according to a report although it was not clear how many other times he could have voted illegally.

Hmm, wonder who he voted for?

A public defender said to the federal district judge Fred Biery that three other men had used the identity of Vargas through the years…Salazar Ortiz began to use the name several years ago after buying a birth certificate of a man in a bar for twenty dollars.

And he got away with this for years, until…

His false identification was detected by the Department of State in December of 2016 [when Obama was still in office] when he sent a passport application by mail, according to the newspaper, adding that he was arrested during a raid on his house in August of 2017.

Here’s here is the San Antonio Express-News article that served as the source for the La Opinión article: “Salazar would not tell federal agents how many times he had voted using the name of former San Antonio resident Jesse H. Vargas Jr…” [Undocumented immigrant who voted illegally in San Antonio gets 30 months in prison, , by Guillermo Contreras, January 24, 2019]

As for the real Jesse H. Vargas Jr., poor guy, a victim of identity fraud, he now lives in Arizona.

So why did La Opinión report this? The paper is admitting that this sort of thing goes on. Most of the reporting is factual, but evokes sympathy for the perp. As a warning to readers that they need to not get caught?

Is The U.S. The Tenth Most Dangerous Country In The World For Women?

For its levels of violence, both sexual and non-sexual, the United States is the worst country in the West to be a woman, in accordance with the ranking The World’s Most Dangerous Countries for Women 2018, published by the Thomson Reuters Foundation. In fact, the U.S. is the only country in the West which is included in the list published this past December, and is in tenth place.

Sure enough, in the Thomson Reuters report it actually has the U.S. listed as the tenth-most dangerous country for women in the world. It’s the only Western nation on the list. [The World’s Most Dangerous Countries for Women 2018]

But it’s based on polling—and in the U.S. that polling was driven by the “Me Too” hysteria.

And if Excelsior believe that, it shouldn’t be encouraging women to emigrate to the U.S.—the report says Honduras is safer for them anyway!

Andres Manuel Lopez Obrador, known as AMLO, began his term as president of Mexico on December 1. And he is still going out of his way not to criticize President Trump.

In his February 6th press conference, a reporter asked AMLO this:

...we wanted to know the position of the Department of the Interior about Trump’s speech yesterday where he accused Mexico of organizing the migrant caravans which are directed to the weakest points of the border.”

The day before, AMLO spoke of U.S. politics:

There is no way we are going to meddle in the internal politics of the United States. We have received a respectful treatment from President Donald Trump and we are going to also maintain an attitude of respect toward his government.

AMLO did express his personal opinion that a four-year Presidential term was not ideal, because of the mixing of politics and public administration. But he closed the discussion by pledging again not to meddle:

“…we are not going to question the internal politics with electoral purposes in the United States or any other country.”