None Dare Call It Treason: Pelosi’s Democrats Are Simply A Post-American Party

House Minority Leader Nancy Pelosi may occasionally forget who the current president is, but she just roused herself for an eight hours long speech about the need to give Amnesty to illegals. Her celebration reveals the terrible truth about the Democrat Party: it can no longer be called an “American” political grouping in any meaning sense—it’s simply a vast pressure group that wants demographically to overwhelm and economically to plunder the Historic American Nation. But the Democrats’ frankly anti-American stance does not necessarily translate to electoral defeat—especially if the GOP won’t call treason out for what it is.

Pelosi’s speech even put some members of her own party to sleep. [ WATCH: Dem Congresswoman Dozes Off During Nancy Pelosi's 8-Hour DACA Speech , Fox News, February 8, 2017] Still, while Pelosi is no orator, her extremism was dramatic— including her perverted self-hating boasting about her brainwashed grandson wishing for brown skin because it’s the “future of our country” [Pelosi: My Grandson’s Birthday Wish Was To Have Brown Skin, Brown Eyes; “Face Of The Future Of Our Country,” RealClearPolitics, February 7, 2018].

Pelosi’s arrogance is not surprising considering her own post-American state of California. The GOP been rendered utterly irrelevant there. The top three candidates in the state’s 2018 gubernatorial “jungle primary” are all Democrats [Poll: California governor’s race a toss-up, by Carla Marinucci, Politico, February 8, 2018]. Former Los Angeles Mayor Antonio Villaraigosa, who in college headed a chapter of the frankly revanchist group MEChA, is now within two points of being the favorite of America’s largest state. Far-Left candidates are poised to triumph throughout the state and the Republican Congressmen who are hanging in conservative districts are being targeted by a national Leftist effort [Think California politics is on the far-left fringe? Just wait for the next elections. By Scott Wilson, Washington Post, February 3, 2018].

Or consider the Democrats’ second-in-command, Congressman Keith Ellison. Fresh from endorsing Antifa’s physical attacks on conservatives, he’s receiving typical adoring Main Stream Media coverage for taking the bold stand of associating President Trump with “white supremacy” for even considering enforcing immigration laws [Rep. Keith Ellison at rally denouncing Trump as white supremacist: ‘Justice for all…. Whether you’re born here or not, by Penny Starr, Breitbart, February 7, 2018]. Ellison is a black nationalist in the literal sense—meaning that he has actually advocated carving out a section of American territory specifically for blacks.

Yet while there are innumerable hot takes on the “white nationalism” of Donald Trump or Steve Bannon, Ellison’s prior efforts to dismember the union and create an ethnostate have attracted little attention and almost no criticism from the Ruling Class. 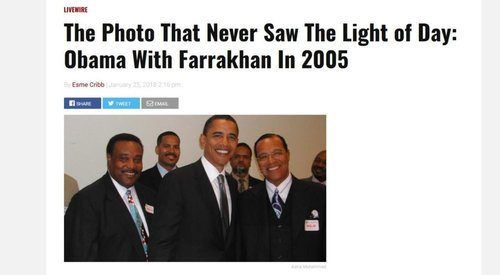 Nor is this surprising. How can it be, when reporters are now gleefully admitting they actively concealed photos of then up-and-coming politician Barack Obama with Louis Farrakhan in 2005?

Instead, MSM enforcers save their venom for the rather banal civic nationalism of President Donald Trump and the Republicans. The president’s recent State of the Union speech was essentially a cheerleading speech for America, and the Commander-in-Chief sounded especially proud when he discussed how the booming economy was helping African-Americans. (The European-Americans who actually support him were, naturally, not mentioned).  Democrats, especially black Democrats, sat stonily silent while President Trump hailed the progress of people who despise him. 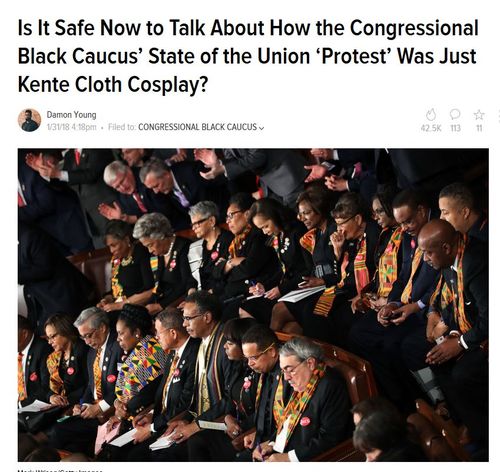 The visual was especially striking as black Democrats wore kente cloth to symbolize their identification with African nations rather than the U.S. As many wits observed, the Congressional Black Caucus looked like cosplayers pretending to be the delegation from Wakanda rather than a group of serious legislators from a First World country.

President Trump, allegedly humorously, later described the Democrats’ behavior during his State of the Union speech as “treasonous” and “un-American,” prompting the usual hysteria [Trump: Democrats ‘Un-American,’ ‘Treasonous,’ During State of the Union, by Jessica Taylor, NPR, February 5, 2018]. The chutzpah is breathtaking considering how journalists and their pet elected officials in the Democrat party have waged a nonstop insurgency against the President of the United States since his inauguration, accusing him of being a puppet of Russian President Vladimir Putin. Indeed, as even Never Trump cuckservatives at National Review wearily pointed out, Democrats have habitually and quite seriously called Republicans not only traitors but “terrorists” for opposing their various policies.  [Is Trump Serious about ‘Treasonous’ Democrats?  , by Dan McLaughlin, February 5, 2018]

But Trump’s “joke” really should be taken seriously. The likes of Nancy Pelosi are traitors in the most literal sense—in that they openly and explicitly oppose the interests of American citizens and advocate their replacement with foreigners. Pelosi’s ludicrous claim that the Founding Fathers (who created the Naturalization Act of 1790) would support the mass influx of “Dreamers” and that illegals are “more American than Americans” is as definitive a statement of hatred for American citizens as can be imagined [Pelosi is entranced by 3 million ‘Dreamer’ illegals, insults Americans’ children, by Neil Munro, Breitbart, February 7, 2018].

Even in pop culture as well has politics, it has become an unspoken premise among Leftists that the United States is inferior to the Third World and Americans need to be replaced, as white celebrities seek to increase their own perceived social status by tearing down that of their fellow citizens.

Indeed, the only real distinction among Leftists now are between those who are traitors (such as Pelosi and Colbert) and those who are nationalists for a foreign nation.

Among the latter, the greatest example: unquestionably Congressman Luis Gutierrez, who ran out of Congress when his fellow legislators began a patriotic chant. We shouldn’t call the likes of Villaraigosa, Gutierrez, and Ellison traitors but patriots—patriots, however, for countries and peoples that have nothing to do with America.

Why then are they ostensibly representing us in our own Congress? Send them back to Mexico, an independent Puerto Rico, or let them build Wakanda.

Partially because of the usual pattern of first term presidents, partially because of the united MSM opposition to President Trump, Republicans face a struggle in the upcoming midterm elections [Is there a Democratic wave building in this year’s election? Key races will tell, by Bill Glauber, Todd Spangler, and Ali Schmitz, Detroit Free Press, February 8, 2018]. Republicans seem lost for a theme. Tax cuts are all very well, but mean little to the struggling American workers who turned out in such numbers to give Donald Trump the presidency.

Perhaps Republicans should turn borrow a theme from the Democrats—specifically Pelosi’s twisted bragging about her emotionally abused grandson.

There’s no rational reason why American citizens should be forced to be a despised minority in their own country. Indeed, unlike the hostile foreigners occupying our country, this is the only home we have.

The Founders designed the United States of America explicitly “for ourselves and our posterity.” The Democrats seem to be suggesting the country belongs to everyone except Americans themselves—who alone have no right to it.

President Trump needs to stop joking and make the case seriously: The answer to the charge of racism is still the charge of treason.

And as public policy continues to change the country’s demographics, the Republican Party needs to make this charge sooner rather than later—or there won’t be much of a country left to defend.