Sometimes journalistic artistes who seek to mold public opinion via compelling sob stories of illegal aliens miss the mark by including too many details about diverse dysfunction. The LA Times’ Tuesday front-pager may have lurched into the fact zone concerning Maya illegals and the number in the Central American horde who have crossed Obama’s open border. Meanwhile, we are supposed to feel sorry for illegals from the south who don’t even speak Spanish. 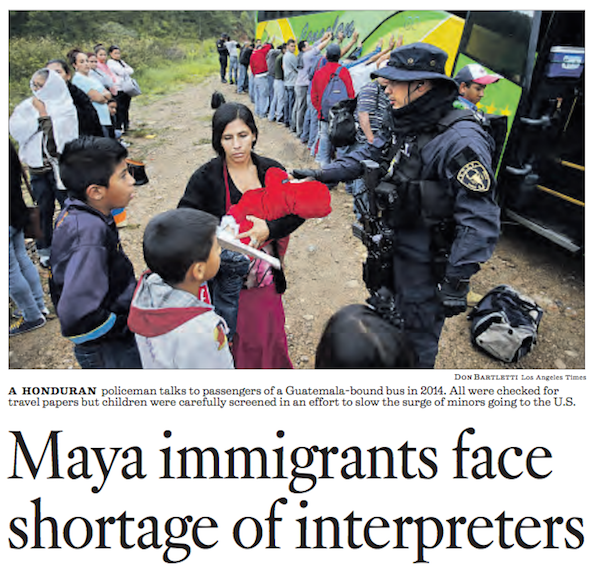 The fact that more than 100K Centrals have arrived here illegally in recent years is alarming enough: they are straining schools and local budgets wherever they alight en masse. But the many who are minors without parents are a recipe for gang formation, particularly when the need for unskilled labor is shrinking enormously. Interestingly, the excuse du jour for asylum whiners is that gangs at home are pestering them to join, but then they end up in gang towns like Oakland.

Did any American vote for this country to be the deluxe flophouse of the world?

The day Vinicio Nicolas found out whether he would be allowed to stay in the United States, and hopefully far from the gang trying to recruit him in Guatemala, he brought along an interpreter.

With the stakes so high, he wanted someone who spoke his native tongue. He had arrived in the U.S. just eight months before, and his English wasn’t good. But neither was his Spanish.

The language the 15-year-old needed an interpreter to wrestle with — for the sake of his future — was an ancient Mayan one called Q’anjob’al, or Kanjobal.

Successive waves in recent years of more than 100,000 immigrants from Central America — many of them boys and girls who came without their parents — have created a shortage of people who can translate Mayan languages, especially K’iché (Quiché) and Mam. This is an especially acute need for arrivals from Guatemala, which is home to more than two dozen indigenous languages, but also from countries such as Honduras.

Before entering an asylum office in Anaheim, interpreter Aldo Waykam asked Vinicio how he was feeling: “Tzet x’i a kul?”

Spoken by almost 80,000 people in mostly rural municipalities in Huehuetenango, Guatemala, Kanjobal is common in places like Santa Eulalia — where Vinicio grew up — but rare everywhere else.

Mam, a Mayan language spoken by more than 500,000 people in Guatemala, ranked ninth in the top 10 languages spoken in U.S. immigration court last fiscal year. Quiché ranked 11th. Both surpassed French, according to the Department of Justice Executive Office for Immigration Review.

Five years ago, Quiché and Mam didn’t even break the top 25 languages spoken in immigration court.

The shortage of interpreters is leading to a host of issues. Often, judges delay immigration hearings until one is found. At times, asylum seekers are deported even if they have a strong case because a qualified interpreter cannot be found in time. And unlike in immigration court, interpreters aren’t provided for free during asylum hearings.

Oakland is home to one of the largest concentrations of Mam speakers in the nation.

“I’m very concerned about meeting the demand, especially since more are coming,” Adelson said. “The demand for Mam has just gone off the charts.”

Vinicio’s case was Waykam’s second of the week. If he wasn’t already employed managing several shops and restaurants in the L.A. area, Waykam said, he could probably do interpreting full time.

Vinicio and his brothers, who live in Compton, heard Waykam on a Kanjobal radio station that streams online and hired him on the spot. Waykam helped translate Vinicio’s story to the asylum officer.

Vinicio was 14 years old when the gang recruiters came looking for him outside his school. They offered him drugs, a knife and even a gun.

But they wouldn’t give up, Vinicio said. They told him they would kill his entire family if he didn’t join.

One night, they came looking for him, and he escaped through the back door. He said he slept the night in the wooded mountains near his village before catching a bus to Guatemala City the next day.

He couldn’t stay in the nation’s capital because the gang has a network there, Vinicio said.

Instead, he borrowed $3,000 from an aunt and made his way to the United States. He walked into a U.S. Customs and Border Protection station in Arizona, asking for asylum.

Chaj, a Quiché interpreter, used to get one or two calls a year for interpreter services. Now, he said, he gets about 10 calls a month.

“We can’t meet the demand,” said Chaj, of Alhambra. His organization has 17 interpreters in six Mayan languages.

Many of the services are for immigration court, asylum hearings and Superior Court. But interpreters are also used in hospitals and schools, he said.

Some immigrants are unaware of their right to an interpreter in immigration court and settle for a Spanish interpreter who can’t accurately convey the client’s case for staying.

Mariano Garcia Matias, a 52-year-old Mam interpreter who lives in Los Angeles, travels the nation offering his services. Sometimes he’s so busy, Matias said, that he has to turn away clients.

Like most Mayan language interpreters, Matias does what’s called “relay interpreting.” That means another interpreter provides the English-to-Spanish translation while Matias translates from Spanish to Mam.

“It has to be a perfect translation, and we’re talking about someone’s life on the line, including that person’s family,” he said.

Matias is a naturalized U.S. citizen, but others who could do translation are in the country illegally and don’t want to get near immigration court. At times, the interpreter is working from a remote spot in Guatemala with spotty phone service.

A good interpreter is key, said Eryk Escobar, a supervising attorney for the program that represents unaccompanied children at the Central American Resource Center in L.A.

“If you don’t have an interpreter, it’s going to make a big difference at the end of the day,” he said.

He once had a client who insisted on explaining his case in Spanish — instead of Quiché — out of pride.

The two had a tough time communicating, and the client’s case for immigration relief ended up looking weak, Escobar said.

“Once I got the interpreter in our meetings it … was a slam-dunk case,” he said.

Before walking up to the window at the asylum office waiting room, Vinicio said he was optimistic about being allowed to stay. Waykam wasn’t so sure. Only a tiny percentage of cases are approved.

Minutes later, the two walked to a counter with a glass partition. An immigration official informed Waykam of the outcome of Vinicio’s case.

He delivered the news to the teenager in a language made more intimate by the distance from home and the small fraternity of people who could wield it to share both heartache and joy.

You didn’t win your case.