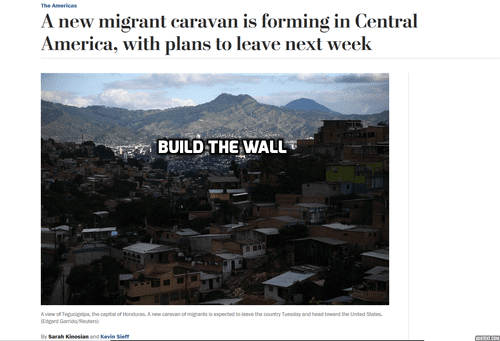 Looks like the illegal-alien invasion that began in Honduras on Columbus Day, surged over Mexico’s border and landed in Tijuana, is just the beginning. Another human train has formed in Honduras and is supposed to leave at 5 a.m. January 15. [A new migrant caravan is forming in Central America, with plans to leave next week, by Sarah Kinosian and Kevin Sieff, The Washington Post, January 11, 2019]. But Mexico’s interior minister suggests her government won’t simply permit a deluge of Central Americans to tramp over Mexico’s borders at will.

Though stopped in Tijuana, WaPo’s reporters claim the first caravan is viewed as a success.

[I]n Honduras, El Salvador and Guatemala, where pockets of extreme violence persist and economic opportunities are limited in many places, there is a widespread perception that the earlier group succeeded. “Many people see the last caravan as a success in that people were able to travel safely, and they were well taken care of,” [ Karen] Valladares [executive director of the National Forum for Migration in Honduras] said. 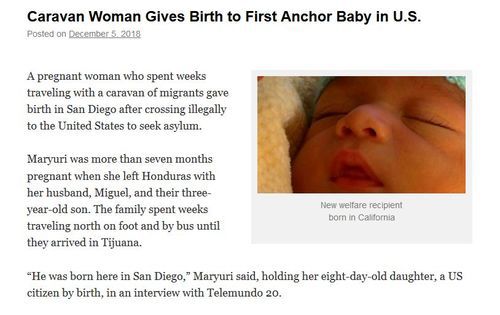 Indeed. The “migrants” didn’t just travel safely and receive food and water.  Many  made it across the border, where American authorities released them. Example: the 19-year-old pregnant Honduran who scaled the border barrier at Tijuana to give birth is now somewhere in Ohio. [Honduran woman, 19, in migrant caravan scales border wall to give birth in US after 2,000-mile trip, by Barnini Chakraborty, Fox News, December 6, 2018]

Meanwhile, Mexico is letting the horde stay in Tijuana while their cases are adjudicated. That decision came down despite Mexico’s denying it made a “Third Country Agreement” to house “migrants”, at least for now.

Still, WaPo reported in the same article, caravans are the way to go because they’re safer and cheaper. Caravanners don’t have to pay criminal and possibly murderous smugglers who exploit and harm them.

For Central Americans, who typically depend on expensive and unreliable smugglers to travel to the United States, caravans offer a cheaper, safer way to migrate. So, despite Trump’s opposition, experts say it is likely that they will continue to form.

Consider a sobering datum: an early estimate of the number in this new human tsunami is 15,000. [Another, bigger migrant caravan is set to leave from Honduras next month, by Wendy Fry, The San Diego Union-Tribune, December  28, 2018] 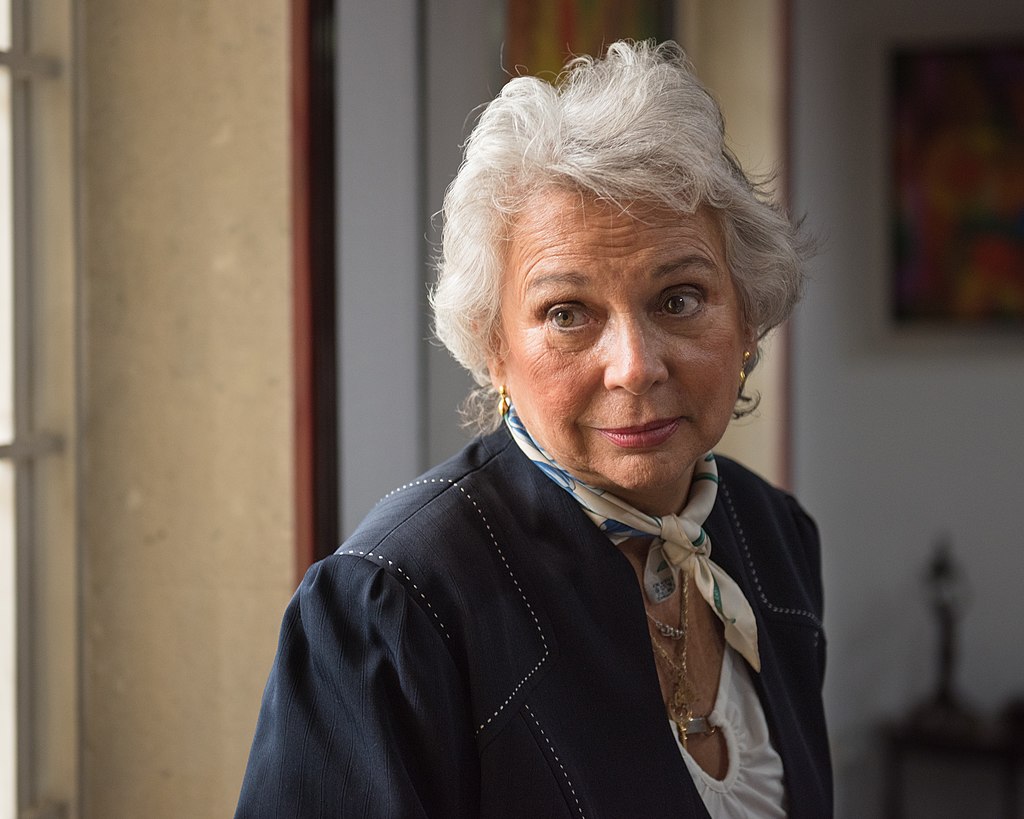 It’s hard to say, but we might have something of an answer in a recent speech by Olga Sanchez Cordero (right) Mexico’s new and first woman interior minister. She spoke at the 30th annual convention of Mexican ambassadors in Mexico City [Mensaje de la Secretaria de Gobernación, Olga Sánchez Cordero, durante la XXX Reunión de Embajadores y Cónsules (Message of the Secretary Of The Interior, Olga Sanchez Cordero, during the 30th Reunion of Ambassadors and Consuls) Mexican Government Website, January 7, 2019].  It may have been coincidence, but she mentioned the new caravan in the question and and answer period of her speech, which was about Mexican immigration policy.

She said immigration policy is “a crucial matter for the interior and exterior policies of the government of the Republic” that “will be based on a humanitarian vision to regulate the entrance of the migrants to our territory, so that it will be legal and orderly.”

She focused, of course, on “migrants” who “enter Mexico with the intention of residing temporarily or permanently in our territory,” as opposed to those merely seeking “passage towards the United States of America.”

Ignoring the overlap — those who strike out for the United States but stay in Mexico — 80 percent, she said, fall into the latter category. They’re headed for Anytown, USA.

As for those who want to stay in Mexico:

[O]nce they are authorized and registered …. the next step is to decide with each one of them, their location in the municipio [a municipio is roughly equivalent to a combination city/county in our system] that is most adequate, in accord with their socio-demographic characteristics and the possibility of offering them work, and shelter, and basic services of education and health.

That sounds like Mexico will shepherd migrants around the country. But that’s none of our business. “Migrants” who stay in Mexico are Mexico’s problem.

Our problem, again, is those who travel through Mexico to the United States; i.e. the 80 percent.

That’s where the finer points of Sanchez Cordero’s speech come in.

Mexico must consider “the relevant decisions that the government of the United States adopts” regarding immigration, she said. She recognized the right of the U.S to formulate its own immigration policies, and that permission to enter the U.S. “does not correspond to Mexico.”

…with actions and investments that stimulate progress and human development as part of the basic guarantee of personal and familial security in jobs and the generation of basic services for their inhabitants.

In other words, the region’s corruptocracies must look out for their own people. That’s a good, tough message they needed to hear.

She also called on the United Nations and Organization of American States to help with “the massive migration phenomenon from the countries of Central America to the U.S., that inevitably pass through our country.”

But why will these Hondurans and other Northern Triangle “migrants” “inevitably pass through”—like a bad weather system?

The rhetorical question aside, Sanchez Cordero again spoke directly to the powers that be in the Northern Triangle:

It’s also indispensable that the governments of the countries of Central America, particularly Honduras, El Salvador and Guatemala, assume their unavoidable responsibilities in attention to the demands and aspirations of their populations.

As far as U.S.-Mexican relations go, AMLO appears ready to work with President Trump, she said:

The government of Mexico is open and disposed to a serious, respectful and constructive with the government of the USA, to attend to in a joint and coordinated manner, the Central American migrants who enter Mexican territory with the only object of arriving to the neighbor of the north.

Unhappily Sanchez Cordero struck a false note when she seemed to claim that the caravan didn’t harbor any criminals. “Our vision is that emigrants are not criminals, much less that they constitute a threat to the security of Mexico or the United States,” she said. Many Mexicans, particularly in Tijuana, don’t agree. And neither do some Central Americans.

Anyhow, what will Mexico do with Central Americans who pass through Mexico bound for the U.S., but don’t make it in? After all, noted a briefing paper posted to WhiteHouse.gov notes, “72% of migrants report making the journey for economic reasons and therefore would not typically qualify for asylum” [A Border Security and Humanitarian Crisis, WhiteHouse.gov, January 4, 2018].

Well, Sanchez Cordero says, they must “return to their countries of origin.”

And that implies that  Mexico would crack down on migrants  entering Mexico; i.e., illegal immigration. Will that really happen on a large scale?

Sanchez Cordero noted that Central Americans can enter Mexico through just 12 legal points. But, she said, Mexico has detected some 370 major illegal border crossings, and thus will not only strengthen the 12, but also determine which of the 370 are suitable for immigration stations.

“Where that is not possible,” she warned, “these points will be watched and controlled to avoid access undocumented of persons to our territory.”  All of them?

Sanchez Cordero said Central Americans who apply to enter Mexico must have personal ID, and will be  photographed and fingerprinted. “Those who refuse to give their identity data or biometric data” she warned, “will not be able to enter Mexican territory.”

As well, those who enter the country illegally elsewhere “will be detained by the Mexican authority and returned to their country of origin, or where they entered.”

As to the caravan leaving on January 15, she knows about it: “We are taking the necessary measures for the safe and secure entrance of that caravan.”

That means the Donald must prepare for what’s coming: more “migrants,” more sob stories from the media, and more vilification from open-borders Democrats and their propaganda arm, the leftist MSM.

I’ve consistently said that Mexico is more willing to co-operate than many think. But it’s up to us, and no other country, to control our own border.

Mr. President—Declare a National Emergency and BUILD THE WALL!