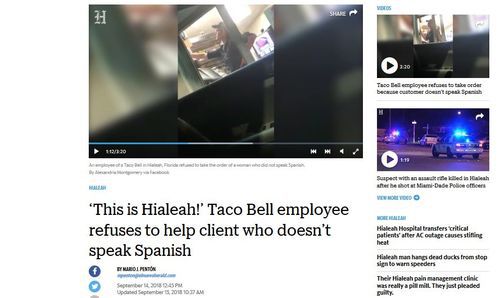 No Country For English Speakers: What Hialeah's Taco Bell Portends

In his book Back To Blood, the late and lamented Tom Wolfe portrays Hialeah, the city in Florida that has an almost entirely Spanish-speaking population, as a separate world from the United States. [Back To Blood, by Gregory Hood, American Renaissance, December 21, 2012] As he usually was, he was right, as a new incident at a Taco Bell confirms:

A video of an argument with a Taco Bell employee in Hialeah has unleashed a wave of indignation on social media.

The incident happened on Wednesday night, when Alexandria Montgomery was trying to place an order — in English — at a Taco Bell drive thru window at 785 East Ninth St. The employee refused to take her order because she wasn’t speaking Spanish.

In the video, which was posted Thursday night, Montgomery asked the annoyed woman, “Do you have a manager here?”

“She is in her house sleeping,” the employee replied in Spanish in a dismissive tone. There was no one else to take the order, the employee claimed.

“Honey, I have a car behind you,” the employee says in Spanish and closes the window.

“Can you move please? I have an order behind you. There is no one who speaks English,” the woman tells Montgomery in the video and threatens to call the police.

“This is Hialeah, I’m sorry,” she said in Spanish.

Americans are already having a hard time obtaining certain jobs because they can't speak Spanish. No one helps them. In contrast, when employers require employees to speak English, an army of lawyers, judges, activist organizations, and reporters rally against them. ["Revised" language policy remains functionally the same, discrimination continues against Spanish-speaking employees, ACLU, July 2, 2013]

What is needed is federal recognition of the English language as the official language of this country, followed by legislation that ensures no one can be denied service or a job because employers or employees don't want to speak English. This is an overwhelmingly popular issue and could give the GOP something to run on in the upcoming midterm elections. It might upset the Cheap Labor Lobby, but GOP politicians needed to decide whether they want to stay in office with upset donors, or please their donors but need to find a new job.

If the GOP doesn't do anything, we are going to see more of this. It will stop being a novelty and no employees will be fired for it. And more cities and stretches of "American" territory, will, like Hialeah, cease being part of this country in any real way.