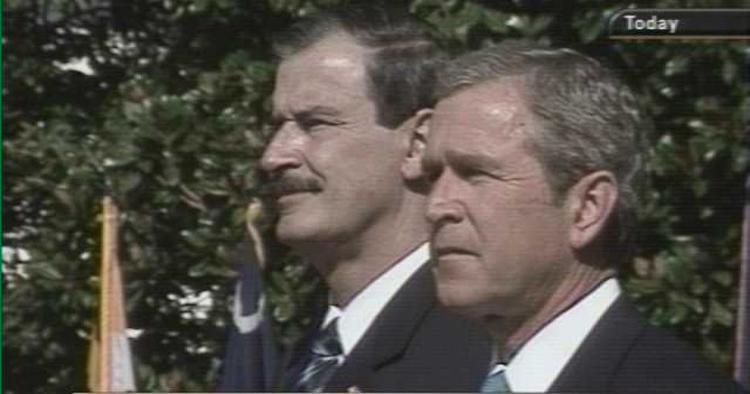 Vicente Fox Should Be Arrested And Thrown Out Of U.S. For Good.

While President Bush was explaining why Americans must export democracy to the rest of the planet last week, Mexico's President Vicente Fox was practicing his own version of democracy inside the United States.

Virtually unreported in the national media, Mr. Fox's brazen lobbying of American elected leaders to advance his own agenda for amnesty of illegal Mexican aliens comes very close to constituting an act of aggression.

In the first week of November, Mr. Fox arrived in this country to busy himself with visits to three southwestern states and their political elites—New Mexico, Arizona, and Texas. His business in these states was to put pressure on their political leaders for amnesty.

Then, after being wined and dined by the submissive governors and lawmakers, Mr. Fox proceeded to harangue the aliens in New Mexico to push for amnesty themselves.

There are a couple of little problems here. The most obvious is that the head of state of a foreign government, which is about to enter negotiations with the United States over the issue of immigration, is actively and openly seeking to apply political pressures within this country to influence both the negotiations and the internal politics of the nation. Back in the Cold War, when foreign nations did this sort of thing, it was called "subversion," and foreign agents who engaged in it were either kicked out or locked up.

Then there is yet another little problem. The U.S. Constitution explicitly states (Article I, section 10), "No state shall enter into any treaty, alliance, or confederation." OK, no state has, but the point of the constitutional language is to prevent states from conducting their own foreign policies and reserve to the federal government—rightly—the authority to conduct relations with foreign countries.

Merely by meeting with the president of Mexico, the southwestern governors violated at least the spirit of the Constitution. The president of the United States ought to have something to say about this, but he doesn't.

Then there is a third problem, perhaps the most serious of all, in what Mr. Fox has been doing and what the governors, lawmakers and the Bush administration have let him get away with.

It is the pretense of the Mexican government, at least slyly and covertly, that the territory of the states Mr. Fox visited this month really belong to Mexico, that the United States stole the territory during the Mexican-American War in 1848. Today, the migration of millions of Mexicans into these states—Mexicans who are able to vote in Mexican elections—makes the absorption of these territories by Mexico a real possibility.

By parading around these states as the president of Mexico and visiting the state governors, legislators, and local bigwigs, Mr. Fox engaged in a not-very subtle propaganda campaign to suggest—to Mexicans, to the states he visited and to this country—that he was merely touring the states of his own nation.

He was furthering the myth that these states really belong to Mexico—and the political leaders of the states and the nation stupidly allowed him to do it and get away with it.

Indeed, Mr. Fox was almost explicit in what he was doing. Addressing the legislature of the state of New Mexico, he stated that the United States and Mexico are really united "by nation and language."

Mexico and the United States are two separate nations and speak two different languages. How can they be united by "nation and language?"

They are united by language because millions of people who live in this country now speak the language of Mexicans.

And they are united by "nation" because it is Mr. Fox's conceit that they are really the same nation—his.

And why should he not entertain that conceit? The 3.5 million Mexicans who now live—illegally—in the United States are in process of disengaging from this nation and joining the territory they occupy with that of the Mexican nation.

Nations are not created by borders, laws, treaties and maps. They are defined and created by peoples, and what the mass movement of one people into the territory of a different people has accomplished is to fracture one nation and expand another.

Mr. Fox should have been arrested, dragged to the borders of his own nation, thrown over them and told not to come back. That is also what should be done to the millions of illegal aliens from his nation who have invited themselves into ours.

But the mere fact that neither was done or is even thinkable by our own leaders means that Mr. Fox's vision of a Greater Mexico consisting of whatever parts of our country he can grab may be on the road to reality.