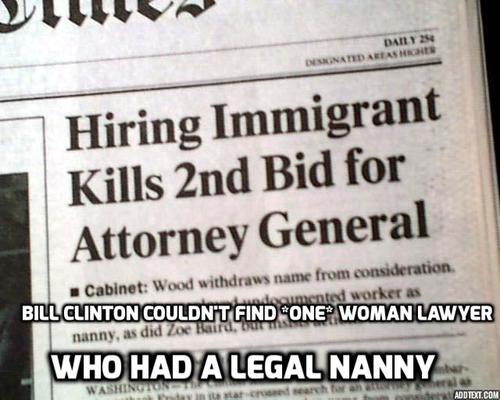 Ann Coulter: Who Benefits From Mass Immigration? Not You!

Assiduous readers of my columns know that I have frequently made the point that America's immigration policies benefit only three groups of people: 1) rich Americans with a lot of employees, 2) the immigrants themselves, and 3) their grandmothers back in Chiapas.

The money illegal immigrants send out of the country doesn't come from their low wages. It comes from the taxpayers, who are required to subsidize immigrants so that investment bankers can have cheap nannies. Yes, it is a problem that they couldn't possibly live on what I pay them, but that's where YOU come in, taxpayers!

When the rich merely have to pay Social Security taxes on their nannies, they quickly say, Oh, never mind, as we saw in the 1990s, when Bill Clinton's first two female attorney general nominees had to withdraw because of the illegal aliens raising their kids, and we finally ended up with Janet Reno.

Zoe Baird, the first nominee caught up in Nannygate, promptly fired her illegal alien nanny and chauffeur, Lillian and Victor Corderos, who were deported.

That's how much the rich love Latino immigrants! As Baird's spokeswoman, Jamie Gorelick, said at the time: "I think it truly pains them that Lillian has had to pay this price. ... They have true affection for her."

A cynic might wonder if the beneficiaries of mass Third-World immigration would be so altruistic toward the rest of the world if they were the ones being forced to compete with immigrant workers.

At a time when the working class could have been ginned up to oppose this dump of low-wage workers on the country, the unions lied to them and told them, Don't worry! This will make the union stronger. Thirty years later, California construction workers who were making $45 an hour are now making $11 an hour.

The entire readership of the New York Times is immune from wage pressure like that. Our immigration policies strictly limit high-skilled immigration, ensuring that there will be no competition for jobs in the executive suite, while foisting a dog-eat-dog, survival-of-the-fittest competition on their employees.

The left has never had to defend the argument that everyone on the planet has a right to come to America, drive down wages, access welfare and force us to educate their children—because rich Republicans like the cheap labor, too.

Seeing what a fantastic deal mass immigration is for the rich, it's easy to understand why they lie so much about it.

For example, the Cato Institute—funded by the Koch brothers—keeps producing "studies" claiming that immigrants are less likely to be on welfare than Americans.

We're told day in and day out about the horrible lives of the poor asylum-seekers. They'll starve if we send them back! Their children have all kinds of health problems, no medical care, no decent food, no roof over their heads! Their neighborhoods are hotbeds of wife-beaters, drugs, murder and gangs!

And then: A financial burden to America? No ... what makes you say that?

Even if it were true that fewer immigrants were accessing government assistance than American citizens, the number of immigrants who should be on welfare is, wait, checking my notes ... yes: ZERO. Why would any country bring in people who immediately need our monetary support?

In fact, bringing in poverty-stricken immigrants is a disaster for the welfare programs intended to help our fellow Americans. Fully half of all non-citizens in the United States are on at least one welfare program, according to the (very non-MAGA) Migration Policy Institute.

The only purpose of these Cato "studies" are the headlines, which will be endlessly repeated throughout media without a moment's reflection.

Whether journalists are citing phony studies, phony polls or phony experts, every statement about immigration in the mainstream media is a lie. You always have to look for the trick. Cato's welfare "studies," for example, put welfare-receiving children of immigrants—legal and illegal—in the "American" column.

This tells us nothing about the soundness of our immigration policy. If the immigrants' kids need welfare, we're not bringing in the right immigrants.

Even more preposterous, Cato counts Social Security and Medicare as "welfare." This is money that was taken by force from working Americans for their entire lives, of which they will get a portion back upon reaching retirement age. Immigrants are collecting welfare that the older Americans didn't collect when they were the same age. Wait until they retire.

Of course Americans are more likely to be collecting Social Security and Medicare! I refer you to mass-immigration advocates' usual sneer about white Americans being so much older than young, hardworking—and surprisingly cheap!—Latino immigrants.

It's so obvious that our immigration policies are bankrupting the nation's welfare programs that I've often wondered if this was the intent of the libertarian Koch brothers all along. Burden the entire system until it blows up—and then we can finally return to pre-Great Society America!

Someone needs to tell the plutocrats that their employees are voting, and they aren't voting libertarian. Heard of Venezuela? Heard of Alexandria Ocasio-Cortez? Heard of California?

The rich's Third World employees—"natural Republicans," we're always told by the Wall Street Journal—turn out NOT to be huge fans of small government. That's why, instead of being a libertarian paradise, California is a banana republic, running on fumes from Silicon Valley and Hollywood.

As Lenin supposedly said, "Capitalists will sell us the rope with which we will hang them." The rich know they want to pay their employees less, and they don't know anything else.