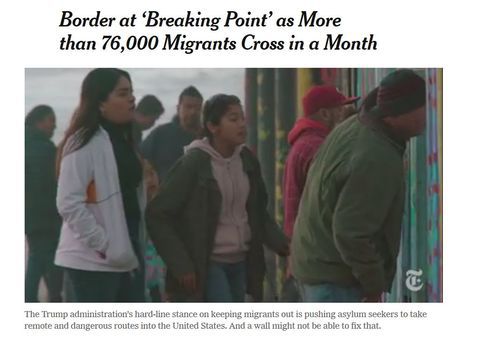 In its lede editorial Wednesday, The New York Times called upon Congress to amend the National Emergency Act to "erect a wall against any President, not just Mr. Trump, who insists on creating emergencies where none exist."

Trump "took advantage" of a "loophole" in the NEA, said The Times, to declare "a crisis at the border, contrary to all evidence."

The Times news desk, however, apparently failed to alert the editorial page on what the top story would be that day.

"Record Numbers Crossing to U.S., Deluging Agents" was the page-one headline. The Times quoted Kevin K. McAleenan, commissioner of Customs and Border Protection: "The system is well beyond capacity, and remains at the breaking point. ... This is ... a border security and a humanitarian crisis."

Reporter Caitlin Dickerson explained what is behind CPB's alarm: "The number of migrant families crossing the Southwest border has once again broken records, with unauthorized entries nearly double what they were a year ago."

She continued, "More than 76,000 migrants crossed the border without authorization in February, an 11-year high ... newcomers continue to arrive, sometimes by the busload, at the rate of 2,200 a day."

Only if one believes in open borders is this not an emergency, not a crisis. Consider the budgetary impact alone of this invasion.

The majority of migrants breaching the border are from Mexico and Central and South America. Most do not read, write or speak our English language, are not college graduates and arrive with few skills.

Almost all will enter the half of the U.S. population that consumes more in social benefits during their lifetime than they will ever pay in taxes.

With the U.S. debt over 100 percent of gross domestic product and the deficit running at nearly 5 percent of GDP, at full employment, the burden the migrant millions are imposing upon our social welfare state will one day collapse the system. For these folks are coming to a country where education K-12 is free and where, if the Democrats take over, pre-K though college will be free.

These folks will be eligible for city, county, state and federal programs that provide free or subsidized food, rent, housing and health care.

All were enacted for the benefit of U.S. citizens. Uninvited, the Third World is coming to partake of and enjoy them.

With 328 million people here now, approaching twice the number as in 1960, how many more can we take in before government sinks under the weight of its beneficiaries?

And there is a larger issue.

If, as appears probable, President Trump is not going to be able to build his wall and all the security measures taken in this century have proved inadequate to stanch the invasion of America, how does the invasion end?

Or is this the endless invasion, where the future is decided on our 1,900-mile border with Mexico and we, as the last superpower, are a pitiful, helpless giant too morally paralyzed to stop it?

The resolution and determination of Third World peoples to come to America, even if they have to break our laws to get in and stay, is proven.

And if there is no matching national will to halt the invasion, and no truly effective means that would be acceptable to our elites, the migrants are never going to stop coming. And why should they?

Politically, this invasion means the inevitable death of the national Republican Party, as peoples of color, who vote 70-90 percent Democratic in presidential elections, become the new majority of 21st-century America.

The bell will toll for the Grand Old Party when Texas votes like California in some presidential election. That is game, set, match.

What is remarkable is how our cultural elites are giddily embracing what most of the advanced world is recoiling from.

The Times that berates Trump for trying to secure the border with his wall constantly bewails the rise of ethnic nationalism, populism, tribalism and "illiberal democracies" in Europe. But the rising "isms" of the new Europe are driven by popular fear and loathing of the very future The Times cannot wait to embrace.

Japan's population of 127 million, the second oldest on Earth, has begun to shrink. But there seems to be no desire in Japan to import millions of East or South Asians or Africans to replace the vanishing Japanese.

Does China look upon its diversity as its greatest strength?

Hardly. Beijing is repopulating Tibet with Han Chinese, and has set up "re-education camps" to de-program Uighur Muslims and Kazakhs in the west so they sever their birth attachments to their ethnicity and faith and convert into good communists.

If he cannot get a Democratic House to fund his wall and the forces now on the border are being overwhelmed by the migrants, as CPB reports, how does he propose to halt the invasion?

And if he does not stop it, who will? And what does failure mean for America's future as one nation and one people?