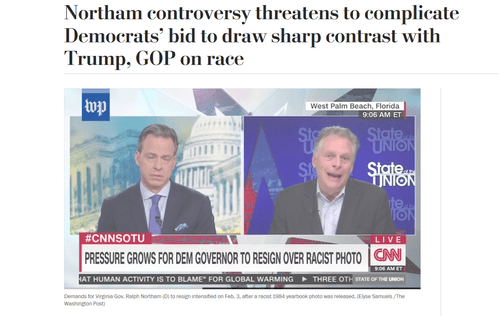 Patrick J. Buchanan: Sacrificing Northam Will Not Be Enough For Radicalized Democratic Party

"Once that picture with the blackface and the Klansman came out, there is no way you can continue to be the governor of the commonwealth of Virginia."

So decreed Terry McAuliffe, insisting on the death penalty with no reprieve for his friend and successor Gov. Ralph Northam.

Yet Northam had all but sworn Saturday he had no knowledge of the 1984 yearbook photo and that he was not either man in the photo.

McAuliffe, who is considering a run for president, joined Kamala Harris, Elizabeth Warren, Bernie Sanders, Cory Booker, Julian Castro and Joe Biden in the pile-on. All had washed their hands of Northam.

That a moderate Democratic governor is near friendless in a fight for his life reveals much about the Democratic Party.

Earlier last week, Northam was at the center of another blazing controversy. He had backed legislation to permit abortions up to birth.

And then he volunteered that, if a child were born after a botched abortion, the "infant would be resuscitated if that's what the mother and the family desired, and then a discussion would ensue between the physicians and the mother."

Northam seemed to be not only endorsing third-trimester abortion, but infanticide, "mercy killing," the murder of a living but wounded baby after birth. A public outcry forced the legislature to back off the bill.

Then the photo from the yearbook of Eastern Virginia Medical School surfaced. Yet, in term of moral gravity, which is worse?

Public advocacy of late-term abortions with an option to execute babies who survive, or a stupid and insensitive 35-year-old photo of two beer-drinking guys, one dressed up in Klan costume, the other in blackface.

Other Democrats are saying that even if Northam is not in the "racist" photo, he admitted to putting shoe polish on his face, to imitate Michael Jackson and his moonwalk, for a 1984 dance contest.

To some Democrats, third-trimester abortions are a step forward for women's rights. Gov. Andrew Cuomo was cheered in Albany for enacting a law to guarantee late-term abortions should Roe v. Wade be overturned.

By week's end, Virginia Democrats were bewailing the "horrible" history of their state, where, in 1619, the first slave ship arrived at Point Comfort with men and women from Africa who would work the plantations until the Civil War ended, 250 years later.

The most memorialized of Virginia's heroes, in its monuments and statues, are colonists, Revolutionary War and Confederate soldiers and statesmen, and 19th- and 20th-century senators and governors. Almost all supported slavery or segregation.

When the Warren Court outlawed segregation in 1954, Virginia and the South replied with the Dixie Manifesto, declaring open defiance and "massive resistance" to the court order to integrate.

Not until Nixon's presidency was the order carried out.

In recent years, there has been a running debate about what kind of country America is.

Is she a blood and soil nation, a separate people, with their own unique history, heroes, holidays, language, literature, myths and music? Or is America a propositional nation, united solely by its values, whose mission it is to transmit these values to mankind?

The question raised this weekend, however, is even more divisive.

Is America a good country, or has she, like Virginia, such a past of sins and crimes as to make her eternally ashamed and for which she should make eternal amends? Does America owe the world?

Should Western civilization be held responsible for what it has done through the centuries to persons of color the world over? Should we conduct a purging of monuments to all of America's "white racists," as antifa and its allies are determined to do in Virginia?

The Democratic Party may believe that by throwing Northam to the wolves it will satisfy these forces. It won't.

We are at the beginning of a Kulturkampf to purge America of all monuments and tributes to the white males who created, built and ruled the country, and once believed that they, their nation, their faith, and their civilization were superior to all others. And, without apology, they so acted in the world.

Those two guys drinking beer in blackface and Klan robes and a hood thought they were being funny, but to the unamused members of a radicalized Democratic Party, there is nothing funny about them.

And, after Northam, these intolerant people will demand that the Democratic Party nominate a candidate who will echo their convictions about America's past.