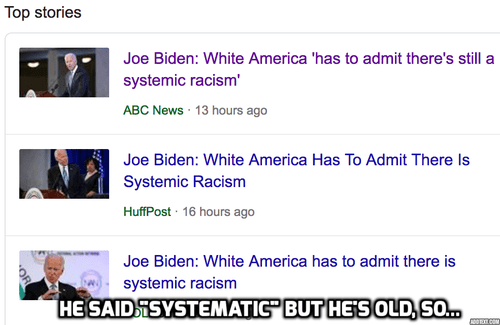 Joe Biden Announces 2020 Campaign Will Be About "Systematic" Racism, Media Corrects To "Systemic"

Former VP Joe Biden at MLK breakfast: "We have a lot to root out, but most of all the systematic racism that most of us whites don't like to acknowledge even exists."

"There's something we have to admit—not you, we, white America—has to admit there's still a systematic racism." pic.twitter.com/preguit7yi

Joe Biden is so old and uncool he doesn’t know he’s supposed to be denouncing “systemic racism” at Al Sharpton’s MLK breakfast, so he keeps denouncing “systematic racism,” which is the opposite. Jim Crow was “systematic racism,” but that’s not around anymore, while blacks doing worse on average on the SAT is supposed to be due to “systemic racism.”

Interestingly, a lot of outlets fixed Biden’s faux pas for him in their headlines: Here’s a wonderful part of his speech:

“Barack says if your name is Jamaal and your name is Jim, and you have the same qualifications and Jim gets the job,” Biden said.

If Biden had spent five minutes reviewing his speech before he gave it, he probably would have realized that dropping his old boss Barack’s name into a sentence asserting discrimination against people with African sounding names wasn’t ideal. But, as Joe might say:

But, as my old boss Barack might say: That’s not who we is. Joe-wise, I mean …

Biden’s 2020 Presidential campaign slogan is rumored to be: