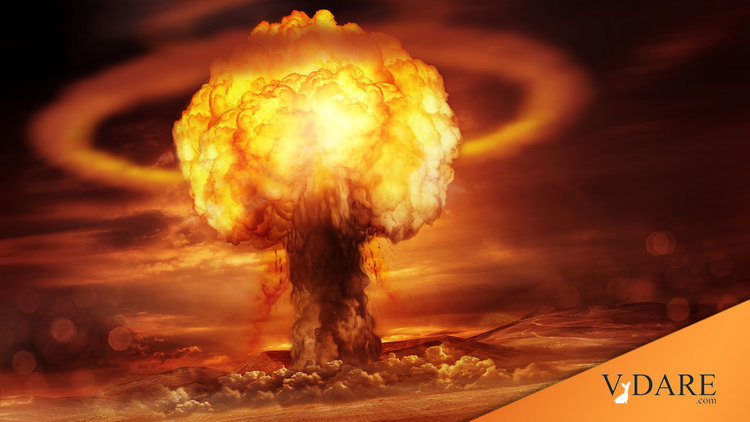 No American success is safe from BHO’s history rewrite team. Now the event that brought a rapid end to WWII — rather than a bloodbath invasion of Japan — is about to receive the special Obama Sorry treatment.

The late Captain Paul Tibbets (pictured), who piloted the plane that dropped the first atomic bomb, remained unconvinced by latter day critics who questioned the weapon’s use:

“I have been convinced that we saved more lives than we took,” he said, referring to both American and Japanese casualties from an invasion of Japan. “It would have been morally wrong if we’d have had that weapon and not used it and let a million more people die.”

Such common sense doesn’t dent the thick belief system of the President, however.

The son of the U.S. Air Force pilot who dropped the first atomic bomb in the history of warfare says the Obama administration’s decision to send a U.S. delegation to a ceremony in Japan to mark the 65th anniversary of the attack on Hiroshima is an “unsaid apology” and appears to be an attempt to “rewrite history.”

James Tibbets, son of Brig. Gen. Paul W. Tibbets, Jr., says Friday’s visit to Hiroshima by U.S. Ambassador John Roos is an act of contrition that his late father would never have approved.

“It’s an unsaid apology,” Tibbets, 66, told FoxNews.com from his home in Georgiana, Ala. “Why wouldn’t it be? Why would [Roos] go? It doesn’t make any sense.

“I know it’s the anniversary, but I don’t know what the hell they’re trying to do. It needs to be left alone. The war is over.”

Tibbets, whose father died in 2007 at the age of 92, said he receives dozens of calls from veterans every year around this time thanking him for his father’s service.

“‘If it wasn’t for your dad, I wouldn’t be here,’” Tibbets said many veterans tell him. “This has been going on since he dropped that bomb.”

Tibbets said he sees Roos’ impending visit — it will be the first time the U.S. has sent a delegation to the anniversary commemoration in Hiroshima — as an attempt to revise history.

“It’s making the Japanese look like they’re the poor people, like they didn’t do anything,” he said. “They hit Pearl Harbor, they struck us. We didn’t slaughter the Japanese — we stopped the war.”

White House officials on Wednesday referred calls to the State Department, which did not respond to several inquiries about how the decision was made or if national veterans organizations were contacted prior to the announcement that a delegation would attend the commemoration.

The ceremony will begin early Friday with the ringing of a bell and the release of doves. Roos visited Hiroshima weeks after he arrived in Tokyo as a U.S. ambassador last year, and the response was generally positive. […]

President Obama is expected to visit Japan in November, and calls have been growing there for him to visit Hiroshima and Nagasaki, since he has spoken of his vision of a nuclear-free world.

Tibbets said he hopes Obama will decide to forgo visiting to the two cities.

“What’s his purpose? I don’t know what it’d do,” Tibbet said. “History is history, the past is the past. You can’t change it and I don’t know why he’d visit Hiroshima and Nagasaki.