Bernie Sanders is scheduled to meet Wednesday with President Barack Obama in the White House for only the second time Ahead of their White House meeting, a look at the Obama-Sanders dynamic, by Juliet Eilperin and Paul Kane, Washington Post, January 26 2016. This signifies the Sanders campaign’s unexpected strength—but also the Vermont Senator’s record of remoteness from the racial identity politics that now dominate the Democratic Party, as personified by Obama.

Recently, Hillary Clinton unleashed her attack dog, Media Matters’ David Brock, to accuse Sanders of racism, saying Sanders’s latest ad paints a “bizarre” portrait of America. Brock argued that the ad was a “slight to the Democratic base" and that “it seems black lives don't matter much to Bernie Sanders.” [Clinton ally: Black lives 'don't matter much' to Sanders, by Jesse Byrnes, The Hill, January 21, 2016]

Had Bernie Sanders resurrected Leni Riefenstahl to produce his ads? Not exactly.

With Simon and Garfunkel’s song America playing in the background (though it cuts the line “So we bought a pack of cigarettes”), Sanders’s ad showed vignettes of Americans, interspersed with crowds at Bernie Sanders rallies [Art Garfunkel Explains Why He Approved Bernie Sanders’ Use of ‘America,’ by Ted Johnson, Variety, January 22, 2016]. Although the ad went out of its way to include images of minority Sanders supporters, it did not hide the fact the vast majority were white. The bulk of the vignettes evoked Norman Rockwell/New Deal style imagery featuring farmers, families, and small towns, with some SWPL’s and their laptops at coffee shops thrown in as an afterthought.

A decade ago, no one would have batted an eye. In 2004, John Kerry ran an ad criticizing George Bush’s outsourcing policies. It showed half a dozen clips of Kerry meeting with groups of American workers, every single one of whom was white.

In 1996, Bill Clinton ran an ad called “America Back,” which listed his accomplishments while showing videos of Americans. Of the 17 vignettes, only four featured minorities, usually as tokens in a group of whites.

I did not see a single Asian or Hispanic person. Almost all the whites gave off the “bizarre” gestalt that triggered David Brock. The majority of women and children had blonde hair. The ads also twice featured police officers—while Clinton bragged about strengthening capital punishment.

Of course, Clinton’s actions in office did not match this “white bread” vision of America. He later expressly celebrated white America’s demographic decline. However, it’s notable that he still projected this implicitly white image to the voters when he was looking for voters.

Things are far different today. Hillary Clinton doesn’t even bother pretending she wants to preserve the Old America. The Democratic Party is simply what Steve Sailer calls the “coalition of the fringes” against the core. And white families and workers are now “bizarre.”

What does Clinton view as “normal” America? Her first ad featured vignettes of 11 groups of various Americans who are “Getting Started” with new phases of their life. Of the eleven, five were non-white and one was an interracial couple. Of the five groups of whites, one was a gay couple, one was a single mother.

There were only three “core” white Americans, one female retiree, a middle aged woman planting tomatoes, and a gardener. Not one of them was blonde, none of the white women (except the single mother) had long hair—and there was not one image of a white heterosexual couple or of a white father.

Why haven’t Bernie’s advertising people received the memo about the new Democratic Party? Probably part of the explanation: Sanders is an old style Leftist from one of the whitest states in the country. Thus, he was free to occasionally take heterodox positions in the past. Though Sanders marched with Martin Luther King and was arrested for protesting segregation, his Congressional career focused on economic and foreign policy issues rather than race.

However, as the nomination campaign has progressed, especially after Black Lives Matters targeted him, Sanders has emphasized his Establishment Left-wing positions on racial issues.

The sole exception: immigration, where Sanders has in the past opposed massive increases in legal immigration and seems to understand that supply and demand affected immigration.

Sanders told Ezra Klein that open borders is “a Koch brothers proposal . . .What right-wing people in this country would love is an open-border policy. Bring in all kinds of people, work for $2 or $3 an hour, that would be great for them. I don't believe in that."

Sanders later doubled down, telling MSNBC that if "anybody can come into the United States of America . . .there is no question in my mind that that was substantially lower wages in this country." [Bernie Sanders criticizes ‘open borders’ at Hispanic Chamber of Commerce, by Dave Weigel, Washington Post, July 30, 2015].

Nonetheless, Sanders is no immigration patriot. Though he voted against the 2007 Amnesty/Immigration Surge bill, he voted for the Gang of 8 atrocity, the DREAM Act, and wants to expand DAPA. By the time of the first Democratic candidates’ debate, when it became unmistakeable that the party did not intend to compete with Trump for the working class vote, that his collapse into Cultural Marxist identity-politics pandering was complete.

But it is doing him no good. While most polls show him close or leading in Iowa and with a comfortable lead in New Hampshire, these are amongst the whitest states in the Union. In contrast, in South Carolina over half of the Democratic primary voters are black. And there Clinton enjoys a 71% margin among black voters and 34% lead over Sanders.

Nationwide polls show Sanders and Clinton neck and neck among whites, but Clinton has a consistent 40-50 point lead among non-white voters. [The one problem Bernie Sanders has to fix — and hasn’t, by Philip Bump, Washington Post, December 19, 2015]

Non-whites dominate the Democratic primaries in states that have high non-white populations and GOP dominance amongst white voters. These states include the Deep South, Texas, and Arizona. And the four states with the most delegates, including Texas, Florida, New York, and California have a high enough non-white population that it’s impossible for Sanders to win with his pitiful non-white share. [Here’s what Hillary Clinton’s nonwhite firewall looks like, by Philip Bump, Washington Post, January 18, 2015]

Many commentators have wondered what Sanders could do to increase his non-white share. But I can see few options beyond what he’s already done. Most non-whites are extremely Left wing on economic issues and would probably prefer Sanders to Clinton on the issues—if issues were what counted. With the arguable exception of immigration, Sanders has already taken completely standard Leftist positions on these issues—and I doubt immigration has much to do with his lagging support among the black community.

The real reason Sanders is flagging among non-whites: supporting a grassroots candidate and attending political rallies requires some level of civic engagement. The Main Stream Media may not like to admit it but numerous studies have found non-whites are much less civically involved than whites.

As the black political scientist J Foster Bey noted: “There are strong differences in civic engagement by race, ethnicity and citizenship status. Whites are much more likely than blacks, Hispanics or Asians to be civically engaged using any of the four measures. Asians and Hispanics consistently appear to have low rates of civic engagement” measured by volunteering, political participation and community activity. “They also appear to be much less actively engaged in their communities as compared to either whites or blacks” [Do Race, Ethnicity, Citizenship and Socio-economic Status Determine Civic-Engagement?, Tufts University, Tisch College of Citizenship and Public Service (2008)]

Blacks may show up to protest/riot over a police shooting and the Democratic Party can bus them to the voting booth, but by and large they are far less likely to get involved in political campaigns.

Indeed, a Google image search of Hillary Clinton campaign rallies or campaign volunteers brings up images that are just as white as a Tea Party rally or Bernie Sanders ad. 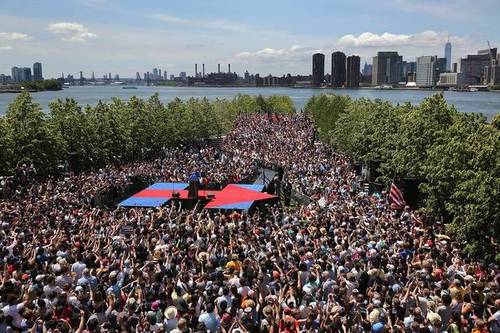 Clinton, however, is the default Democratic candidate, and unless there is a Jesse Jackson or Barack Obama to vote for, blacks and most other non-whites will vote for the default candidate. If Sanders wins Iowa and New Hampshire, he could very well be seen as a serious candidate and some non-whites will follow him, but it would not be because they are attracted to his message or movement.

I have spent a good deal of time in Vermont, and am always stuck that many of the things the Left loves about it are precisely those things which would disappear if it became “diverse.” For example, I visited a public lake with an honor system for you to pay 5 dollars to visit, which you put into an unlocked jar. Suffice to say that in Detroit or Atlanta, locals would skip the fee, trash the lake, and thieves would steal the money that any people gullible enough to play by the rules would have given.

While I am no fan of Bernie Sanders, his political career is a product of a white high-trust society and his unexpected success comes from dedicated and civically involved white Americans.

Unfortunately, neither he nor his supporters recognize that Vermont-style politics is only compatible with the demographics of Vermont.