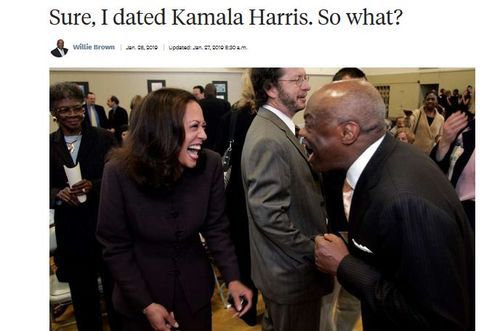 From the San Francisco Weekly 16 years ago:

… If she can just get out from under this damn Willie Brown thing.

Harris routinely tries to distance herself from her ex-squeeze, whom she hates even talking about. The mere mention of their former liaison makes her shoulders tense, her hands clench, and her eyes narrow.

“I refuse,” she says vehemently, “to design my campaign around criticizing Willie Brown for the sake of appearing to be independent when I have no doubt that I am independent of him — and that he would probably right now express some fright about the fact that he cannot control me.

“His career is over; I will be alive and kicking for the next 40 years. I do not owe him a thing.”

Willie is still alive and enjoying himself immensely as a sort of Uncrowned King of San Francisco Emeritus.

She acknowledges that Brown is an “albatross hanging around my neck” and fears that voters who dislike him will ignore her candidacy — even as she dismisses such an act as irrational. “Would it make sense if you are a Martian coming to Earth that the litmus test for public office is where a candidate is in their relationship to Willie Brown?” Harris asks. “Willie Brown is not going to be around. He’s gone — hello people, move on. If there is corruption, it will be prosecuted. It’s a no-brainer, but let’s please move on.”

Would that politics were so simple.

San Francisco voters tend to have long memories, and Brown himself is complicating Harris’ attempts to shed him politically. He personally gave $500 to her campaign, and a political consultant who worked on both of his mayoral runs is raising money for Harris — without her consent — using a pitch letter signed by Brown. Harris denies asking the mayor for fund-raising help and knows it gives her antagonists even more ammunition.

She also knows there’s not much she can do about it, except to keep saying that the affair is ancient history and that she is a good candidate with good ideas. But as Harris well understands, the more she tries to explain away the Willie factor, the bigger a factor he becomes.

… In a series of lengthy interviews with SF Weekly, Harris acknowledges that she benefited from her relationship with Brown, but insists there was nothing improper about it. …

Harris met Brown in 1994 when he was speaker of the state Assembly. She was 29, he was 60. Their May/December affair was the talk of the town during the year before Brown’s successful 1995 bid to become mayor. But shortly after he was inaugurated, Harris dumped Brown, a notorious womanizer.

… Most of the $400,000 she has raised so far has come from the city’s social and legal elites, people with power and money, people who respond well to Harris’ message that Hallinan is erratic, divisive, and soft on crime.

Some of them are people Brown introduced her to….

On the night of the Central Committee vote, a reporter for the Bay Guardian, which has vociferously criticized Harris for her association with Brown, stands staring outside the State Building as Harris drives off in a stylish black car. “Willie Brown gave her that BMW!” the scribe remarks with unconcealed disgust.

The reporter is about half right. In fact, as Harris later tells SF Weekly, the mayor gave her a 1994 BMW, which she traded in for the 1997 model she now drives. The car remains a tangible link to a man whom many San Franciscans associate with political chicanery and self-dealing — a connection that doesn’t bode well for Kamala Harris.

“In Indian society we go by birth,” Shyamala explains. “We are Brahmins, that is the top caste. Please do not confuse this with class, which is only about money. For Brahmins, the bloodline is the most important. My family, named Gopalan, goes back more than 1,000 years.” …

When Harris began dating Willie Brown, also an attorney, she had no idea that the affair would generate political consequences for her in the future.

“Black people who go to college have about two degrees of separation with other black professionals, and those who go to law school have even less,” Harris explains. “The networks of black lawyers in California are small. Brown and I had lots of mutual friends.”

Harris’ networks, especially in high society, expanded rapidly while she was going out with one of California’s most powerful politicians. The association also had major financial benefits, which Harris talks about reluctantly.

Aside from handing her an expensive BMW, Brown appointed her to two patronage positions in state government that paid handsomely — more than $400,000 over five years. In 1994, she took a six-month leave of absence from her Alameda County job to join the Unemployment Insurance Appeals Board. Brown then appointed her to the California Medical Assistance Commission, where she served until 1998, attending two meetings a month for a $99,000 annual salary. …

“I believe that everything you put out in the world comes back to you. There are consequences for everything. Karma exists, absolutely.”