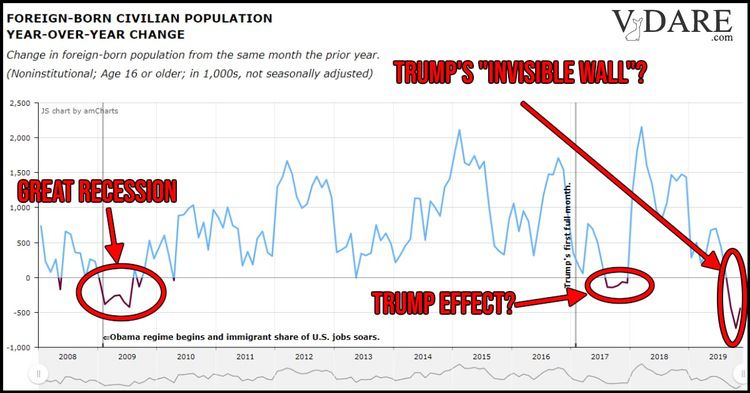 Again, the big news in the November jobs data: The immigrant workforce population continues to fall. This is the third month in a row that has seen an absolute decline, after a protracted slowing in the immigrant workforce growth rate that can be traced back to early 2018. This current year-over-year decline actually exceeds that seen in the 2008 Great Recession. It now seems undeniable that something is going on. Fly in ointment: immigrant displacement of American workers has ticked up, although still well below peak levels.

The immigrant workforce population last shrank in early 2017, when the late lamented “Trump Effect” was literally scaring immigrants away. And in 2008-9, the outflux was driven by economic malaise. But now the economy is strong.

The incredible truth: Trump has apparently been able to reduce the inflow through administrative measures: his Muslim ban, (upheld by the Supreme Court) his revised public charge rules, even more thorough adjudication by USCIS. Note also that Trump has sharply reduced the “refugee” intake, from Obama’s peak of 85,000 to a proposed 18,000 for fiscal 2020.

A long, mournful summary of these administrative measures recently appeared in the Huffington Post:  Trump Got His Wall, After All (by Rachel Morris, November 24, 2019). Morris writes: ”Among immigration lawyers, the cumulative effect of these procedural changes is known as the invisible wall.” She says that like it’s a bad thing!

Meanwhile, the BLS reported a blowout 266,000 new payroll jobs were created in November—well past the Wall Street consensus (180,000) and more than twice October’s job hike (128,000.) Trump, quite understandably, seized upon this moment, tweeting “the economy stupid,” It’s the unofficial slogan of Bill Clinton’s 1992 presidential campaign.

However the Household Survey of Employment, on which our monthly displacement analysis rests, shows an anemic 83,000 job rise for November, with immigrants gaining, and native-born Americans losing:

From VDARE.com’s immigration-focused viewpoint, one that is still almost unreflected in the MSM, this displacement number is a bit of a setback, especially after October’s heartening news. (October marked a return to the remarkable three-month stretch, May through July of this year, during which native-born Americans gained jobs while immigrants lost them, a notable reversal of the long-run trend.)

Native-born American workers lost ground to their foreign-born competitors throughout the Obama years. This accelerated significantly in the months leading up to the 2016 election.

Overall, from January 2017 through November 2019, Trump has presided over a labor market in which immigrants gained 1.645 million jobs, a 6.3% increase, while native-born Americans gained 4.867 million, a rise of 3.9%. But in percentage terms, the immigrant/native-born gap in job creation under Trump — 2.4 percentage points in favor of immigrants—is comparatively low. As recently as April it was 7.1 percentage points, with immigrant employment rising 8.9% from the start of his administration, while native-born American employment gained 1.8%.

Nearly three-quarters through his first term President Trump has reduced the rate of American worker displacement, but not killed the decades-long trend. Our tag line, “As far as job growth is concerned, ‘America First’ has not translated into Americans First,” still holds.

Another way of looking at American worker displacement: The immigrant share of total U.S. employment. It rose in November.

Immigrants held 17.42% of jobs in November, up from 17.19% in October, albeit down from their 17.71% share in November 2018. These percentages are based on employment figures that are not seasonally adjusted, so the November-to-November decline over the past 12 months may be more representative of the long-term trend. The record immigrant job share (18.08%) was achieved in April 2018.

We are told incessantly there are simply not enough job seekers to fill unfilled job positions. But if that were the case, wages would rise enough to “clear the market,” bringing fresh workers into the labor force. It’s not happening. Wage growth edged up to a 3.1% year-over-year gain in November, still below the growth economists expect for an economy with such low unemployment. Wage growth remains comfortably within the Federal Reserve’s target range for 2% inflation, as charted by the Leftist Economic Policy Institute: The message here: the Federal Reserve is unlikely to raise interest rates anytime soon. Trump’s Job Machine is probably good to go until the 2020 election.

More good news: data in the November report show that on three important metrics—working-age population, employment, and labor force participation rate—native-born American workers outpaced immigrants by a considerable multiple over the past 12 months:

Bottom line: This is a formidably strong economy and it has been swamping the effects of immigration. The last few months have generally been good for native-born Americans.

But more than three years after Trump’s great victory, GOP Senators are still on the donor-driven immigration bandwagon. Continued immigration driven demographic drift will be suicidal for the GOP.

It’s easy enough to believe that because none of the Trump Administration’s reforms are entrenched in law, they can be overturned as quickly as they were introduced. And yet even though, in theory, the policy memos can all be withdrawn, the “sheer number of both significant and less significant changes is overwhelming,” said [Ur] Jaddou, the former USCIS chief counsel [under Obama]. “It will take an ambitious plan over a series of years to undo it all.”

A nice thought, but we don’t believe it. As GOP primary challenger Pete d’Abrosca recently told Fox’s Tucker Carlson, at this point the only real guarantee for American workers—and for the Historic American Nation—is an immigration moratorium.