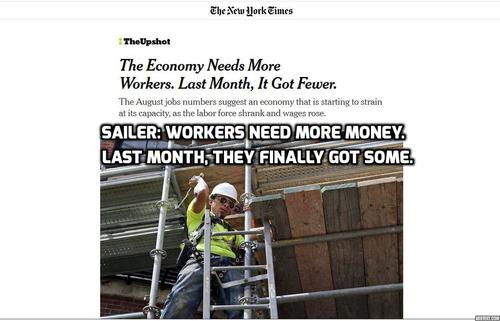 … Which brings us to the wage numbers. It’s good news that average hourly earnings are up 2.9 percent over the last year,

But inflation was up 2.9 percent too, for July to July …

a sign that employers are having to boost pay to keep good employees (or pay more to poach them from competitors).

Wage gains would still need to accelerate further to get to the kinds of levels that are historically normal; in 2008, for example, the year the recession began, average hourly earnings rose 3.6 percent.

But, of course, those greedy workers getting 3.6% raises is what blew up the economy in 2008.

Oh, wait … No, actually, it was some other stuff that was more at fault.

But the fact that higher pay raises are finally showing up in the data is another piece of evidence that employers are coming up against the limits of the labor force. Just maybe, after years of trying every recruitment technique other than raising hourly pay, employers are starting to turn more to that option.

In other words, the labor market could finally be so tight that employers just don’t have a choice if they want to attract and retain workers.

Steps must be taken!