Not only has illegal immigration into the United States dropped since the election of Donald Trump but there’s a marked increase in southbound “self-deportation” from illegals scared about immigration enforcement and ICE raids. Additionally, the National Guard is on standby to help protect construction workers during the building of Trump’s border wall. This is joyous news for Robert Crooks, founder of the Mountain Minutemen, a militia that has dedicated 14 years to guarding the border against illegal immigrants trafficking narcotics into the United States across the southern border.

Robert recently gave me an on-the-ground status update regarding dramatic changes in the state of illegal immigration at the U.S. Mexican border during the first year of the Trump administration.

Last time we talked I was telling you about this Lynchburg teenager who was just savagely mutilated by MS-13 gang members. The police have determined that they were from El Salvador. What kind of gangs do you guys have interactions with crossing the US-Mexican border?

We’re dealing with the Sinaloa Cartel. They pretty much dominate the area we’re working in right now. Most of the organizers of the illicit activity are the cartel members. The day laborers are just commodities for them; you know, just a dollar in their pocket if they get them across.

Are the people coming across the border illegally mostly Mexicans or people from Central and South America?

When you say there’s a reduction in northbound traffic are you talking about traffic from the Mexican border into the United States?

Yeah, absolutely. Even with Donald Trump’s wall not even in construction yet, Immigration and Customs Enforcement is now able to deport inside the interior of the country. Border apprehension is down almost 60% in the past 90 days.

Why do you think the northbound traffic is down? Is it something to do with the Trump Administration?

You have the deportation factor. Once they get deported they get fingerprinted, photographed and logged in. Then there’s a record of their transgression. If they try to get across later, and they have a prior deportation, it voids their ability to get across. So a lot of them are not coming because the deportation rate is so high right now. They don’t want to make that run across the Sonoran Desert because the law enforcement is at such a higher level than it was before.

Has there been any change in the southbound flow back into Mexico?

Oh, absolutely! A friend of mine works port of entry in Nogales and I just got off the phone with him. He told me, “You’re not going to believe the amount of southbound traffic. You know they’re coming up and they got their little trailers pulling their refrigerators, washers, dryers, their big-wheels and their ten-speeds. They’re all going south! We’re not even checking ‘em, we’re just waving ‘em through.”

Self-deportation, exactly. They realize the gravy’s over and it’s time to roll. When they go back to wherever they came from then they can apply for visas or passports back into the country. They don’t want to get caught up here. They get caught up here and they lose everything. Some of these people lived here 10, 15, 20 years and they own homes and cars, got businesses. They’re just throwing in the towel and getting while the getting’s good.

Because Immigration and Customs Enforcement is just starting. Donald Trump hasn’t been in office for even a hundred days and we’re seeing massive restriction of northbound traffic and a HUGE amount of self-deportations.

This is a Godsend. This is what we’ve been waiting for for a decade.

Wow, that’s fascinating. I’m sure people will really want to hear that about the southbound flow. I don’t think that’s been reported anywhere. People will be happy to hear that and want to see more of that continue.

If you go to my Facebook page I’ve been posting quite a bit on the immigration apprehensions. The ICE apprehensions are up like 250% across the board.

I’m really fascinated about how these gang members cross the Mexican border and then get into the interior of the country, up into the northeast corridor. Do they have transportation waiting for them?

Are you aware of any cases where law enforcement busted the transportation rings of the Cartels, MS-13 or other gangs?

They just got a big bust at the Tohono O’odham Indian Reservation a month or so ago. They took 11 of the interior system from the Sinaloa. These were the coyotes. These were the high-pointers. These are the people who orchestrate and put all this together. I reported this on my website. They knocked ‘em out of the box. [11 arrested on suspicion of supplying drug smugglers on O'odham land, By Curt Prendergast, Arizona Daily Star, March 1, 2017 ]

The Tohono O’odham is controlled by the Sinaloa Cartel. The reason Tohono O’odham is important is because of the access to the interstate system and the proximity to Tucson, Maricopa County and Phoenix. Once they have access to the interstate they’re everywhere. [Indian Reservations Have Become Highways For Drug Cartels, by Dave Gibson, The Inquisitr, March 23, 2017]

We don’t have control of keeping these narco-trafficantes from the interstate. Once they get to the interstate they’re in Kentucky, Virginia, New York. They’re in America.

I’ve heard rumors that as the Cartels come into the United States, with all their money, they’re able to corrupt public officials and the judicial system. As the demographics of the country change this is really going to be something we’re going to have to look out for. In your experience is this phenomenon real or is it just a rumor? 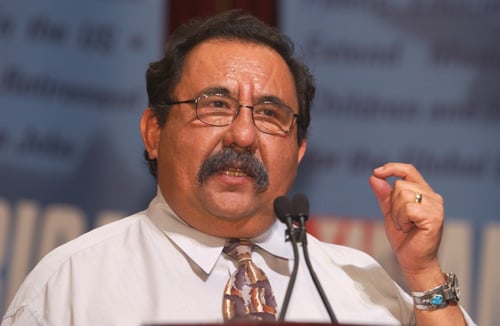 No, it’s absolutely true. When we talk about Raul Grijalva(right) the congressman in Arizona, he’s a Cartel congressman. John McCain, Jeff Flake: these high-profile political figures are catching a tremendous amount of money from the Open Borders advocates or the Cartel to keep the borders open. You’d think Arizona, of all places, would have stricter border control but you have Grijalva, Jeff Flake and John McCain who are catching a tremendous amount of money…

They’re running millions of dollars of narcotics money south. They’ll bring it back into the country to drop it into loans and donations to political machines.

That’s the problem we’re having here in Nevada, with corrupt officials pushing for Sanctuary City status.

What’s your call to action for the average person that is concerned about illegal immigration, drug trafficking and human trafficking at the southern border? What can they do to make things better?

Right now I’m pretty much shutting down my border operation. I just finished a border operation last month; full moon cycle. The northbound flow has diminished to such a point that we had only 1 contact.

So what we’ve done is turn our back on the border and start an operation called Report and Deport working with Immigration, Custom Enforcement. People can call (866)347-2423. These tips are anonymous. Like Janet Reno said, “If you see something, say something.”

If you suspect someone is illegally renting out to several families in a neighborhood call ICE. If you think someone is working on a jobsite that’s illegal, call ICE.

What do you think about having a president with a strong stance on immigration? What was your reaction on the night Donald Trump got elected?

It took me two days to sober up [Laugh]). No, …The Command Sergeant Major of the United States Army called me two days after the election. He told me they’re already taking bids on the fence construction…and that was in November before he’d even been sworn in.

I’ve actually talked to Border Patrol about that very issue. They’ve assured me that there will be enough law enforcement to protect the construction workers while they do their jobs. I was going to volunteer some of my bodies to go down and do security because you can’t work 24 hours. There’s going to be equipment sitting around and stuff like that.

It’s going to be hands on by Border Patrol, don’t worry. They’ve got it under control. If it gets out of hand they will bring the National Guard in. This has already been thought out. This is a diligent effort to secure our border and protect our country. This is the real deal.

Thank you very much for your many years of service to this country, sir.

(You can find more updates from Robert Crooks and the Mountain Minutemen from their website www.mountainminutemen.com and from Robert’s Facebook page)

Jason Kessler (email him) is a journalist and president of the nonprofit Unity and Security for America. Follow Twitter and Gab: @TheMadDimension.