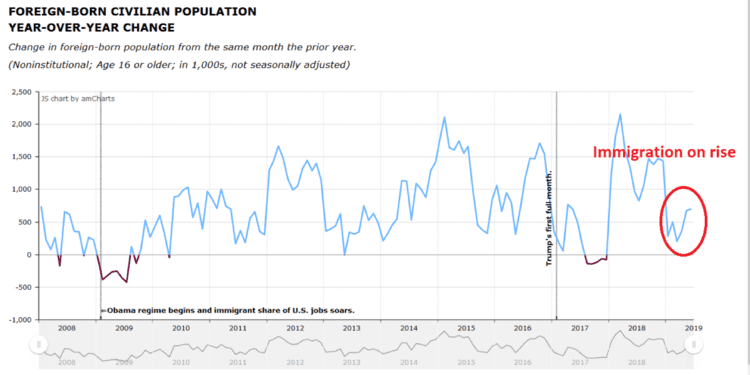 National Data | June Jobs: An OK Month For American Worker Displacement—But With Immigrants Pouring In, How Long Can It Last?

The U.S. added 224,000 new jobs last month, rebounding from a recent lull and calming worries about the health of an economy now entering a record 11th year of expansion. The increase in new payroll jobs easily beat the 170,000 consensus of Wall Street economists polled by MarketWatch. The “other” employment survey, of Households rather than businesses, was in broad agreement, reporting an overall job gain of 247,000. But overhanging this strong economy: immigration, legal and illegal, is surging. What happens if—and when—there’s a cyclical downturn?

While “only” 16.6% of the U.S. working-age population is foreign-born, they accounted for more than half (50.2%) the rise in working age population over this period.

Nota bene: about 300,000 immigrants die every year, and another 300,000 return home voluntarily. So the 702,000 net rise in adult immigrant population reported by BLS for the past 12 months translates to about 1.3 million immigrants entering the country over that time. That’s well above the 800,000 to 1 million legal influx reported by Homeland Security.

Either DHS wrong—or illegals are pouring in at unprecedented rates.

That’s certainly what the latest available South West Border Patrol Apprehensions and Inadmissables data seems to show (although there are rumors June’s will show a decline following Trump’s tariff threats).

Over the past 12 months wages were up 3.1%, a notch below market forecasts of 3.2%. Inflationary pressures remain at bay. For years wage increases have been tepid even as the economy added jobs and unemployment continued falling. But now employees finally appear to be getting raises.

Note, however, that these recent gains look distinctly less impressive in a longer-term perspective.

And, as brought out in the Economic Policy Institute graphic below, the hikes in nominal wage growth, although returning to pre-Great Recession levels, are still below the Federal Reserve’s target for non-inflationary wage growth: What about American worker displacement? For the second consecutive month, our analysis reveals a bifurcated result, with native-born Americans gaining positions while immigrants were losing them.

But while American Worker Displacement fell last month, it still ranked eighth highest among the 126 months we’ve tracked since January 2009. The all-time displacement high, 123.0, was set in April of last year—well into Trump territory.

(Note that the previous June also saw a significant decline in American Worker Displacement. So there may be seasonal factors at work in the May to June period that obscure longer-term trends).

The long term trend remains all too clear: Native-born American workers lost ground to their foreign-born competitors throughout the Obama years; this accelerated significantly in the months leading up to the 2016 election. And more than half way through his first term, President Trump has not yet reversed this trend.

From January 2017 through June 2019, Trump has presided over a labor market in which immigrants gained 1.5 million jobs, a 5.8% increase, while native-born Americans gained 3.4 million, a rise of 2.7%. As far as job growth is concerned, “America First” has not translated into Americans First.

Immigrants held 17.52% of jobs in June, down from 17.61% in May and 18.06% in April, but well above the 17.34% share of jobs they held last June. These numbers are not seasonally adjusted, so year-over-year comparisons are likely more representative of the long-term trend. The record immigrant job share—18.08%—was recorded in April 2018.

Year-over-year comparisons are presented in the table below, from the Employment Status of the Civilian Population by Nativity table published in the monthly BLS Report. It shows immigrants gained jobs at nearly 3 times the rate of native-born Americans over the past 12 months.

Bottom line: This is a formidably strong economy and it is swamping (but not reversing) the effects of immigration, while at the same time drawing more immigrants in. The downside of this will emerge in the next cyclical downturn.