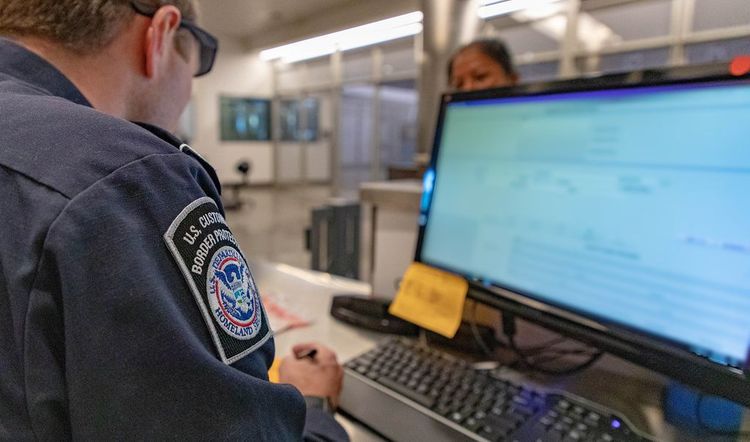 Deep State Fail: Asylum Officers Don’t Want To Enforce The Law, But Are Being Forced To Be Trump Administration

The Deep State is in trouble, at least in the U.S. Citizenship and Immigration Services (USCIS) Asylum Office.  The Resistance does not like what the Acting USCIS Director Ken Cuccinelli is doing with the asylum program.  Asylum Officers are angry that they can no longer rubber stamp fraudulent asylum claims.  Interestingly, these Asylum Officers are not claiming that President Trump was correct about sh*thole countries, they are now claiming that Mexico is an unfit country for anyone to live in.  Asylum Officers were accustomed to being unsupervised and running their own program to their own ideological goals.  These Asylum Officers thought they were above the law and above supervision, as well as having one goal, more aliens in the United States based on some perverse interpretation of American immigration history.  They thought that their version of the poem in the Statue of Liberty base was the law, not the various Acts of Congress regulating asylum and were above the authority of the President to interpret the law and establish standards and practices of enforcing immigration law.

It’s a passion. It’s the love of my life. Everyone talks about asylum and our refugee program with pride or as a part of the moral fabric of this nation, right? The lady in the harbor up there in New York, the mother of exiles—we’re going to fight to make sure that we are actually living up to the ideals that this country was actually founded on.

[Asylum Officers Are Being Used As An Immigration Deterrent, Tjersland Says, NPR, August 16, 2019]

Now it is a dirty secret in the Asylum Office that they are somehow different from other Immigration Officers, e.g. employees assigned to adjudicate an application for a benefit.  they think that asylum applicants, who are considered somehow victims,  should be treated differently from other applicants, rather than an as alien required by law to provide proof that they are qualified for the immigration benefit they are applying for.

But the Deep State saboteurs like Tjersland don’t like that, so they create imaginary standards for asylum applications.

Are you a kind of detective?

INSKEEP: You said nonadversarial interview, which means they’re trying to prove they have a right to stay here, and you’re not a prosecutor going against them.

INSKEEP: You’re just trying to find out if…

INSKEEP: …What the facts are.

Clever misdirection there, and most will not understand the significance.  Tjersland makes an initial damning statement, the interviews are non-adversarial, but then has to backpedal as the NPR host accurately takes the correct meaning of that phrase, that asylum applicants get special treatment that most aliens applying for a benefit don’t get, the presumption that their claim is legally sufficient and the Asylum Officer is merely documenting the claim.  And that is how Asylum Officers work.  They go from a presumption of approving the application to dealing with fraud, if it arises.

However, Tjersland immediately sees the problem, that’s not official policy, so he has to play it like he’s Joe Friday, just getting the facts.  A good investigator sometimes uses that ploy with recalcitrant witnesses who are sympathetic to a suspect, or with the suspect.  “Hey, don’t worry about me, I’m just a fact finder.”  That works sometimes with unsophisticated witnesses and suspects, but generally cops and investigators have a goal, putting someone they think is guilty in prison.  And the same applies to  adjudicating an application by an alien.  Many applications are fraudulent, but asylum applications are more so.

And the “non-adversarial” interview is the cornerstone of the treatment of asylum applicants.  They get the kid glove treatment, and this has been going on many years, basically from Clinton to Bush to Obama.  But that policy is not the law.  There is nothing in the law about pandering to open lies and fraud from aliens.  And nothing in the law about “non-adversarial” interviews.   And that is Tjersland’s objection to the work he now has to do, which is find fraud, the massive fraud that he and other Asylum Officers have been complete failures on, which you don’t find during a “non-adversarial” interview.  Asylum is the most fraud ridden benefit available to aliens, since it is mostly based on their unverified claims.  Asylum and refugee claims are mostly fraudulent, or as Jan Ting, former INS Counsel said, about 95%.

Tjersland states that most Asylum Officers believe as he does.  And that is a bad thing.  It shows how much work Cuccinelli still has to do.  He must move against these saboteurs.  Fortunately,  some are starting to resign.

We’ve had colleagues that have quit. We’re driving away some of the brightest minds, most motivated hearts. Many still remain. Don’t get me wrong. But it’s really a shame.

But, again, Tjersland again goes not for the law, but for a poem to rationalize his illegal behavior of failing to follow the law and policy.

You know, I haven’t thought about it in the sense of running away or walking away from this, no. But I’ve thought about it ’cause I’m getting to that age, but not because of what’s going on, no. I’m not going to turn my back on…

INSKEEP: Turn your back on…

TJERSLAND: …The lady in the harbor, the one that raises the golden lamp, the one that Emma Lazarus referred to in “The New Colossus.”

INSKEEP: Give me your tired, your poor…

TJERSLAND: That’s right—yearning to breathe free in safety and security in the United States—and the mother of exiles, as she refers to her. So no, I haven’t thought about it in that respect, no.

So, there we have it.  Random bureaucrats thinking that they and a poem make immigration policy, not Congress and the President.

Time for Cuccinelli to follow my advice and move against these saboteurs.  There is a way to tame the cadre of Asylum Officers.  Just do it.

Time for a purge of USCIS Asylum Office to begin.