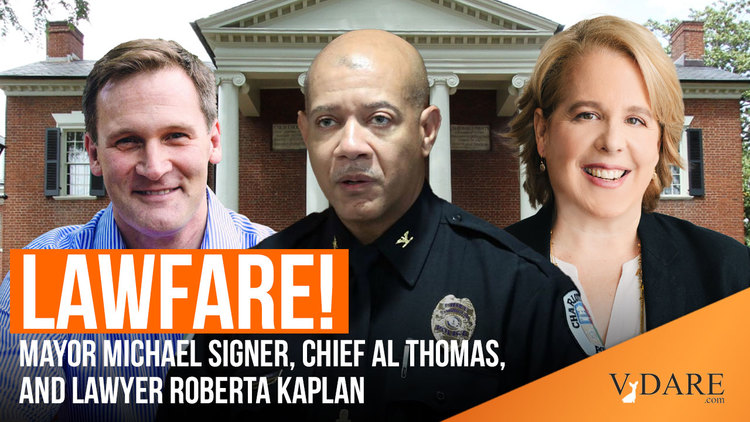 The impending ritual sacrifice of Police Officer Derek Chauvin in Minneapolis, and the Regime Media’s increasingly absurd determination to sustain the January 6 Capitol “Insurrection” Hoax Narrative, were both presaged by the reaction to the 2017 Charlottesville VA Unite The Right Rally, of which I was the permit holder. Unfortunately, we had no U.S. Senators defending us, although the situations had many parallels, and although President Trump famously said there were “very fine people on both sides.” But litigation, both offensive and defensive, rages on. Here’s an update.

The story so far: On August 12, 2017, Charlottesville’s government agents allowed Antifa and Black Lives Matter terrorists to attack Unite The Right protestors who had gathered in the college town, with legal permission, to oppose the removal of Robert E. Lee’s statue. I needn’t reprise all the ugly details with which VDARE.com readers are familiar; this compelling footage shows what we faced (here, here, here, and here).

Financial power is at the heart of the inequality in the American civil litigation system. A Leftist outfit called Integrity First for America is exploiting that inequality in Sines v Kessler. Elizabeth Sines, then a University of Virginia Law school student, and others sued me and others, as the New York Times put it fawningly, because “a conspiracy deprived them of their civil rights” [Charlottesville Lawsuit Puts Rising Intolerance on Trial, by Neil MacFarquhar, October 28, 2019].

Of course, my fellow defendants and I are the only parties losing our civil rights, and here’s why: the radical Left is limitlessly bankrolling IFA to crush us in court.

Founded by wealthy Leftist activists and hedge fund managers, its lawyers include Roberta Kaplan, an identity-obsessed narcissist who scarcely utters a sentence without reminding you she is a Jewish lesbian [Jewish lawyer wants to break the back of the violent white nationalist movement |Roberta Kaplan seeks to deprive supremacist groups of free speech protections by proving incitement to violence, and deter them with massive financial penalties in a civil suit, by Ron Kampeas, TimesOfIsrael.com, July  4, 2019].

In nearly four years, IFA haven’t proven a single thing except that they can mug and beat down defendants who can’t afford attorneys.

Unlike those accused of crimes, defendants in civil cases are not constitutionally entitled to an attorney. So IFA has exploited this to destroy penniless, inexperienced defendants like Elliot Kline (aka “Eli Mosely”), Matthew Heimbach, and an imaginary umbrella organization “Nationalist Front” [Federal judge issues thousands of dollars in penalties for Unite the Right rally participants, by Amanda Williams, NBC29, May 26, 2020].

But, more important, IFA secured a rare adverse inferences sanction against Kline. Because Kline has not cooperated with discovery requests, Federal Judge Norman K. Moon, 85, a Clinton appointee, will instruct the trial jury to conclude that, if he had provided discovery material, it would have proved he was party of a violent, racist conspiracy [Federal judge again sanctions rally organizer, by Tyler Hammel, Daily Progress, December 5, 2020] .

That isn’t just a problem for Kline. Kaplan intends to use Kline’s noncompliance to show that other defendants conspired with him, despite their faithful compliance with burdensome discovery demands.

Problem is, this “Nationalist Front” has no attorneys because it doesn’t exist. It was, supposedly, an informal alliance between real groups like the Traditionalist Workers Party, League of the South and Vanguard America, who are also parties to the lawsuit individually. But it has no legal presence and no formal leadership.

Nevertheless, as with Kline, IFA wants Judge Moon to rule that this “Nationalist Front” was part of a violent racial conspiracy—the crux of their case, based on undefended technicalities.

But imaginary torts and conspiracies are only one part of the lawfare campaign. Someone is paying for it.

IFA has raised tens of millions of dollars from billionaires like Reid Hoffman of LinkedIn. Craig Newmark of Craigslist and actress Natalie Portman also support the lawfare outfit.

In contrast, many of their opponents can’t afford attorneys, and those who do can’t afford researchers, expert witnesses, and evidence collection software to defend themselves on the same footing.

Another example: the dirty pool that IFA attorneys have played against another indigent defendant, Christopher Cantwell.

Recent filings indicate that Cantwell simply hasn’t received important documents from the plaintiffs, who claim to want to depose him, because he’s in federal prison for an unrelated crime [‘Crying Nazi’ Christopher Cantwell Sentenced To 41 Months For Extortion, by Joe Walsh, Forbes, February 21, 2021].

In fact, the plaintiffs have now admitted “confusion” in getting their communications to Cantwell.

And they generously added that they “will also make efforts to ensure that Cantwell is provided with any documents or filings that he has not received while in prison as soon as possible under the circumstances.”

What’s more, they only want to appear magnanimous because Cantwell filed a hand-written pro se legal document calling them out on it.

In words, they’re trying to cover their tracks and look reasonable.

Another example of the plaintiffs’ unscrupulous tactics: their latest attack on James Fields, already in prison for life plus 419 years (!) after being convicted of the murder of Leftist Heather Heyer.

That has been the consistent testimony of Steve Young, the Charlottesville Police Department officer in charge of investigating the Fields homicide case. 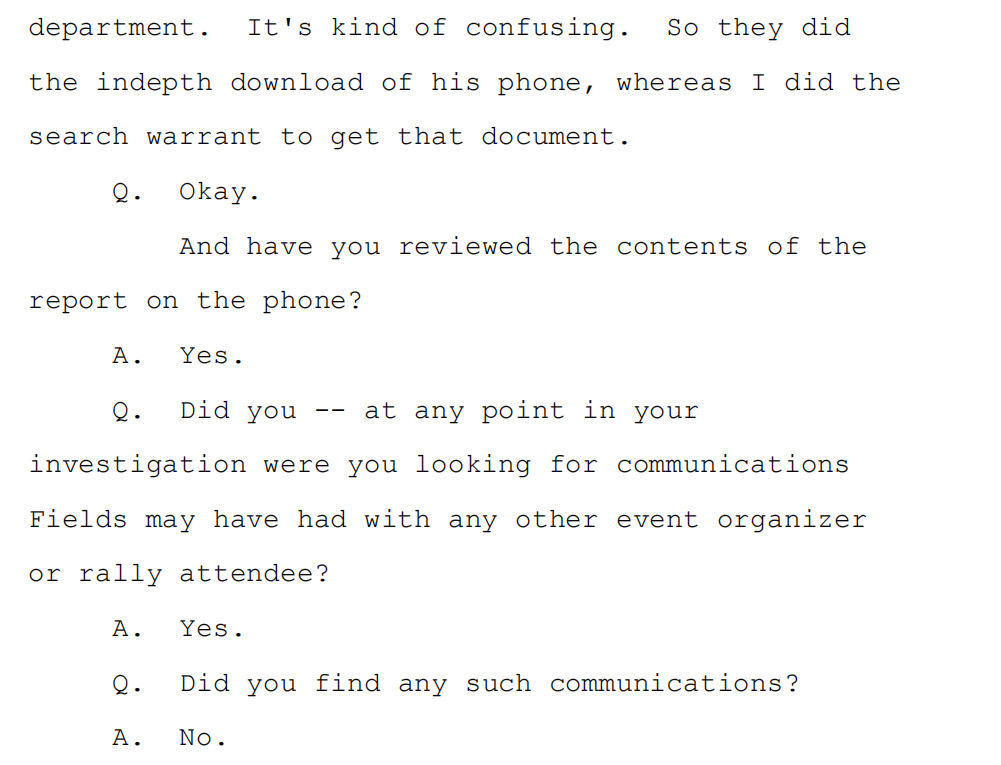 Young has even acknowledged under oath that FBI agents searched the electronic devices in Fields’ Ohio home. Again, they found nothing [Deposition of Detective Steven Young, July 15, 2020] 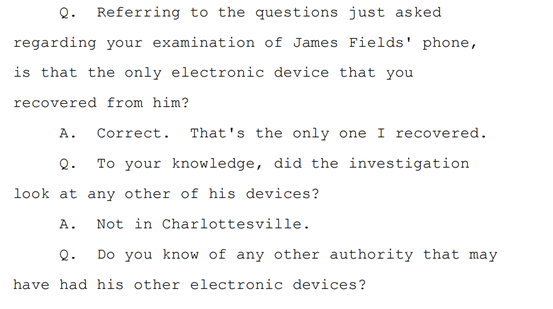 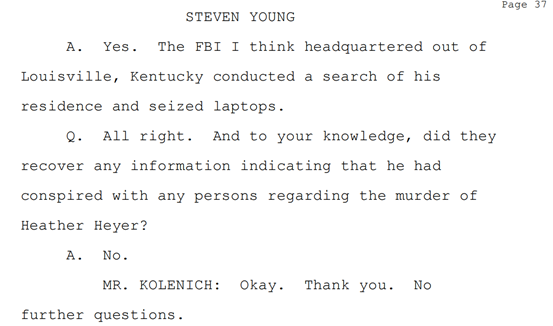 That should have put to rest the plaintiffs’ disinformation and conspiracy theories. But they maintain they can “prove” their case using technicalities like those described above.

Attorneys for Fields have filed documents that say his declining mental health makes him incompetent to testify. Thus they have asked for a mental health evaluation of their client.

The plaintiffs’ response: Fields is merely “refusing to testify.” They want to get Judge Moon to levy sanctions like those on Kline.

UNDER APPEAL: The Right to Speak without Fear of Violent Reprisal

As the permit holder for the Unite the Right rally, I sued the Charlottesville government, including its police, for allowing Antifa and Black Lives Matter to attack the event in order to provide an excuse to provide a pretext to curtail free speech and declare an unlawful assembly. Police chief Al Thomas actually told his force “Let them fight. It will make it easier to declare an unlawful assembly”—while bunkered in a Unified Command Center with City Manager Maurice Jones and FBI agents [Source: Charlottesville Independent Review (“The Heaphy Report”), pgs. 109 and 133].

But in February 2020 Judge Moon dismissed our complaint and denied the existence of the Heckler’s Veto—a novel, shocking ruling that seemed tailored to deny our rights.

Later, we discovered that Moon’s court was staffed with Leftist activists and friends of the plaintiffs. Two of those law clerks had worked on the dismissal ruling. They were removed from the case.

On March 4, I filed an appeal with the United States Court of Appeals for the Fourth Circuit in Richmond.

For the first time, a panel of judges from outside of Charlottesville will rule on my case.

The First Amendment is at stake, which is troubling enough. But worse still, few Americans know what’s happening to their cherished right to peaceably assemble and speak their piece.

Unhappily for the Conservative Establishment, which is too terrified to defend us, it too has a stake in this case.

Imagine a future in which police are not obliged to protect speakers from the threat of violence by groups like BLM and Antifa. An unfavorable ruling in my case could end the few protections left for even those such as Ben Shapiro, Jordan Peterson, Dana Perino, or any other tepid conservative whom the Left wants to silence. (Hint: all of them).

If we lose this one, it will be Open Season on everyone. Democrat-controlled cities will have free rein to order police stand-downs at events where conservatives and patriots speak. Only the wealthy who can afford private security will be able to exercise their First Amendment rights.

Then again, who’s to say that BLM-Antifa enforcers won’t attack private security—and get away with it, the way they got away with attacking us in Charlottesville?

The housebroken Right had better wake up. It won’t just be VDARE.com and American Renaissance that can’t hold conferences.

Indeed, protestors threatening violence might very well shut down Conservatism Inc.’s premier event, CPAC. That’s exactly what those paranoid allegations about a Nazi-rune-shaped stage were designed to set up.

Losing this one could toll the bell for the First Amendment.

Will Charlottesville Be Held Responsible for Destroying Key Evidence of Police Stand Down?

Yet the right to free speech isn’t all we have to worry about. That is why I filed a second pro se lawsuit to hold Charlottesville accountable for destroying key evidence related to the police stand-down.

This document destruction not only violated the Virginia Public Records Act but also, presumably, is a Class 1 misdemeanor that would bar public officials from government service.

And Al Thomas wasn’t the only one. His boss, the head of the Charlottesville government former City Manager Maurice Jones, wiped his phone, presumably containing communications with the former police chief, before leaving office under a cloud of controversy [‘Leaked’ Memo from Charlottesville Mayor Blames City Manager, by Michael Patrick Leahy, Breitbart News, August 26, 2017].

This means these officials tried to memory-hole text messages in which the heads of the Charlottesville government discussed the police response at the Unite the Right rally on August 12.

Unfortunately for them, I discovered that former mayor Mike Signer detailed these heated exchanges with Thomas and Jones via text messages in his book, Cry Havoc: Democracy Under Siege. So we know they existed, although the city had denied it in my FIOA case.

Why these text messages between the two men and other city leadership were illegally destroyed remains a mystery.

Incredibly, instead of denying that it violated the law, Charlottesville argued that the case should be thrown out because, technically, only the Library of Virginia has standing to sue over illegally destroyed records.

Of course, if this were true, private citizens have no means to ensure that public officials faithfully uphold the law. Corrupt governments could simply destroy public records; government would police its own misconduct [The public interest again appears at risk, Editorial Staff, Daily Progress, February 2, 2021].

Unsurprisingly, Virginia State prosecutors have filed no criminal charges against either Jones or Thomas. Further, the Library of Virginia has never conducted an audit of a locality for failing to uphold the Public Records Act.

To contest this outrageous misinterpretation of the law, we hired one of the foremost Freedom of Information Act attorneys in Virginia, Andrew Bodoh, author of The Virginian’s Guide to FOIA.

His argument is simple: Citizens have a right to request public documents under FOIA. They can’t exercise this right if officials illegally destroy those records. Thus, Virginians enjoy an implied right to enforce the law.

Presiding Judge Richard Moore could have a ruling in the case later this month. 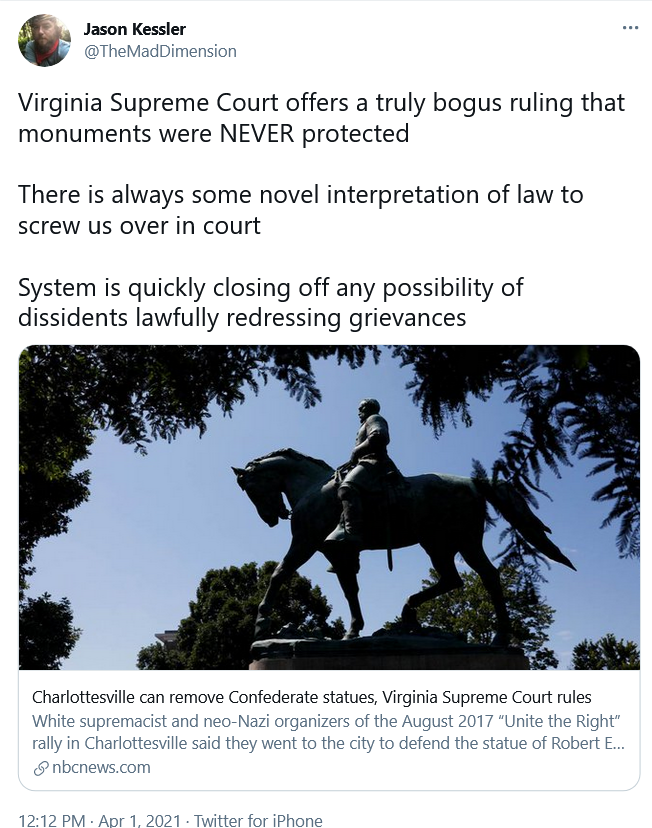 Have a question or comment? Want to donate to my Charlottesville legal fund? Find all the ways to reach me here.

Jason Kessler [Email him |Tweet him] is a freelance journalist and activist who has written for VDARE.com, Daily Caller and GotNews as well as his own site JasonKessler.us.