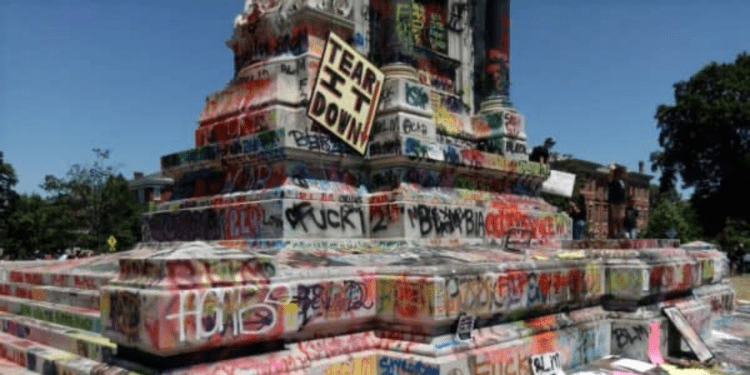 Statues Desecrated In Richmond, Va: "The Worst Treatment—Short Of Tearing It Down—Was Reserved For The Robert E. Lee Monument."

Jared Taylor at American Renaissance has a photoessay called Richmond Has Fallen, on the desecration of Confederate memorials."The worst treatment—short of tearing it down—was reserved for the Robert E. Lee monument." (Close-up of the base, above.)

This, of course, it a hate crime, the way desecrating a church, a synagogue, or a cemetery is. That argument wouldn't bother the desecrators—they've already desecrated, officially, at least one Confederate cemetery. See Pro-Castro Madison Mayor Desecrates Cemetery Memorial To Confederate POWs Who Died Due to Union Neglect.

The general is still astride Traveller, but the state of Virginia, which holds title to the monument is determined to take him down.

Monument Avenue is a majestic boulevard, lined with lovely houses. The people who live in them are overwhelmingly white, but many houses displayed “Black Lives Matter” signs. This mansion on what is still called (Jefferson) Davis Avenue, had a huge banner hanging from the balcony.

It had a smaller sign at a side entrance.

Are these signs sincere expressions of capitulation or a cynical appeal to the mob: “Please don’t touch our lily-white Doric columns”? I fear it was the former. It was a beautiful day, and someone had hired a black gospel band to give a concert at the base of the Lee memorial. The crowd was almost entirely white, and the mood was festive. There was no menace in the air—but whites still proclaimed their emasculation.