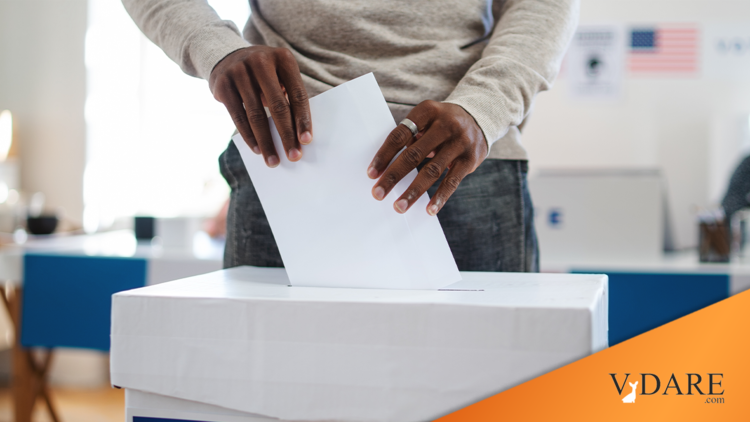 Lesson From 2000 Election: Blacks Mess Up Their Ballots More

It’s not remembered much, but what cost Al Gore the presidency in 2000 was that blacks messed up their ballots that they tried to cast in person at a higher rate than whites did, judging by the demographics of precincts.

More Florida voters attempted to vote for poor Al than for Bush, but more Bush voters successfully executed. Here’s a New York Times article from the middle of the recount:

Democrats in Duval County prepared meticulously for Election Day. They registered thousands of voters and ferried enough people to the polls in predominantly African-American precincts to give a solid boost to Vice President Al Gore in a county expected to swing reliably into Gov. George W. Bush’s column.

But the results of Duval County’s vote left Democrats here shaking their heads. More than 26,000 ballots were invalidated, the vast majority because they contained votes for more than one presidential candidate. Nearly 9,000 of the votes were thrown out in the predominantly African-American communities around Jacksonville, where Mr. Gore scored 10-to-1 ratios of victory, according to an analysis of the vote by The New York Times.

The percentage of invalidated votes here was far higher than that recorded in Palm Beach County, which has become the focus of national attention and where Democrats have argued that so many people were disenfranchised it may be necessary to let them vote again. Neither Democrats nor Republicans have demanded a hand recount or new election in Duval County.

Rodney G. Gregory, a lawyer for the Democrats in Duval County, said the party shared the blame for the confusion. Mr. Gregory said Democratic Party workers instructed voters, many persuaded to go to the polls for the first time, to cast ballots in every race and ”be sure to punch a hole on every page.”

If Mr. Gregory’s assessment is correct, and thousands of Gore supporters were inadvertently misled into invalidating their ballots, this county alone would have been enough to give Mr. Gore the electoral votes of Florida, and thus the White House.

Here’s La Griffe du Lion’s analysis of how the standard IQ gap between the races explains much about the different rates of failing to execute voting properly.

The Democrats missed several opportunities before and after the 2000 election to help Gore win because they didn’t understand that the IQ gap meant that their black voters would mess up more often.

I have no idea if the Democrats have figured that out since then. On one hand, it would be very much in their interest to keep in mind the racial IQ gap when thinking about voting procedures. On the other hand: crimethink!

As a friend said, the 2020 election may turn on whether Millennials can figure out how to mail a letter…