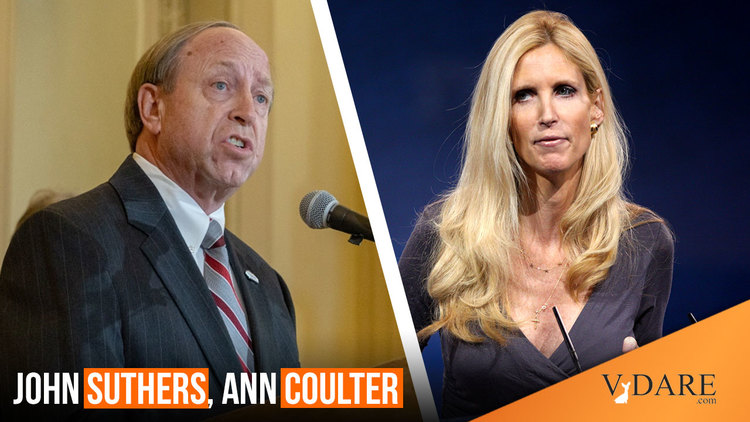 Have At 'Em, Antifa! The New Free Speech—Ann Coulter On VDARE Vs. Colorado Springs

In 2017, as fear and loathing of Donald Trump seized the nation, a U.S. mayor got a four-star resort to cancel a conservative conference by threatening to withdraw police and fire protection.

With all the media blubbering about “attempts to DESTROY our democracy” and violations of “constitutional norms,” it’s remarkable that this Howitzer blast to the First Amendment has received barely any attention, much less the front-page coverage it deserves, not even from the conservative press.

The banned conference, you see, was about immigration.

The sponsor of the conference was VDARE, a long-standing immigration website espousing ideas that are basically identical to Trump’s 2016 immigration promises—both before he made them and after he broke them. The main difference is that the arguments on VDARE are expressed in proper English, and the writers actually believe what they say.

As the 2016 election demonstrated, these ideas are quite popular with a certain segment of voters. Not everyone, just enough to elect a president no one thought could ever be elected, who was loathed by the media, and who was outspent 2-to-1.

Named for Virginia Dare, the first European born on U.S soil, VDARE promotes the novel idea that U.S. immigration policy should benefit Americans. (Obviously, that includes white, Hispanic, Asian and black Americans—whom, by the way, mass immigration hurts the most.) Naturally, therefore, it has been designated a “white supremacist” website by the country’s largest hate group, the Southern Poverty Law Center.

Four months after VDARE signed a contract to hold its annual conference at the Cheyenne Mountain Resort in Colorado Springs, the local mayor, John Suthers—nominee for the Liz Cheney Profiles in Courage Award!—issued a public announcement accusing VDARE of engaging in “hate speech” and urging the resort to cancel (OK, whatever), but also vowing to deny “any support or resources to this event” if the resort honored the contract.

Hey Antifa, in case anybody’s interested—if you firebomb this conference, we won’t be sending any firetrucks. And if you want to attack the attendees, there won’t be any police showing up to stop you.

The next day, the resort canceled the contract and, per the agreement, paid a kill fee. VDARE sued the mayor, alleging a violation of its First Amendment rights.

Here’s the frightening part: the U.S. Court of Appeals for the 10th Circuit (one Obama judge and two G.W. Bush judges; one dissent) found for the mayor on the grounds that it’s possible that the resort canceled NOT because the mayor announced that there would be no police or fire protection, but because of…CHARLOTTESVILLE!

Which VDARE had nothing to do with. (Again, VDARE is an immigration website, not a street protest organization.)

If the Supreme Court does not agree to take up this case and brutally slap down the 10th Circuit, “free speech” will be officially limited to speech acceptable to Antifa, working hand-in-hand with liberal mayors and governors.

I have long maintained that the Left never truly cared about free speech. They merely pretended to in order to protect the people they actually supported: communists and pornographers. That was the sort of “speech” that used to get banned.

But today, the speech that gets banned includes statements like: There are only two genders; Maybe we shouldn’t defund the police; Affirmative action is unjust; Masks don’t work—No they work! No, they don’t work! Also, apparently, speech asserting that mass immigration has not been an unalloyed good for our country, contributing to our prosperity, cohesiveness and happiness.

One of Justice William Brennan’s hallowed quotes is: “[T]he government may not prohibit the expression of an idea simply because society finds the idea itself offensive or disagreeable.” Those stirring words were in defense of flag-burning. And here’s a famous one from Justice William O. Douglas: “Restriction of free thought and free speech is the most dangerous of all subversions. It is the one un-American act that could most easily defeat us.” That was about communists.

But ever since conservative speech became the target of censors, liberals adore governmental suppression of speech. (The one, lone exception that proves the rule: Nadine Strossen, former president of the ACLU and author of “HATE: Why We Should Resist It With Free Speech, Not Censorship.”)

As the 10th Circuit explained, conservative speakers should have no expectation of police and fire protection. Specifically, the majority opinion declared: “What VDARE wanted, it had no right to demand—municipal resources to monitor a private entity’s private event.” (Monitor?  How about: “Not refuse to send police officers and fire trucks.”)

So I guess we can forget that sonorous horse crap about the First Amendment protecting ideas that “society finds…offensive or disagreeable.” The left’s new model is a public-private partnership to prohibit speech unacceptable to Joy Ann Reid.

Henceforth, blue states and cities will be free to shut down conservative speakers, MAGA meetings, Daughters of the American Revolution gatherings or anti-mask protests. Some jackass mayor will claim that the conservatives are threatening to engage in “hate speech” and deny them police and fire protection (then sit back and wait for the accolades from the media).

Not so fast, patriots. While you fist-pump, liberals are busy institutionalizing the censorship of conservatives throughout the nation. You want to talk about “institutional bias”? How about the systemic bias against any ideas unacceptable to progressives being baked into American society?

If the Supreme Court fails to overturn the outrageous opinion in VDARE Foundation v. City of Colorado Springs, free speech’s gravestone will read: “Bedrock principle of a nation; 1791-2022.”